Dewey and Ferris were both influenced by the same man: Johann Heinrich Pestalozzi. Many believe that Ferris nurtured the Pestalozzian movement and carried it into the twentieth century.

That movement began in pre-revolutionary France with John Jacques Rousseau (1712-1778) who wrote the book Emile, which proposed a new educational plan. In an unorthodox manner, a mix of academic and practical, Emile was educated to use his hands as well as his mind to provide the necessities of life. 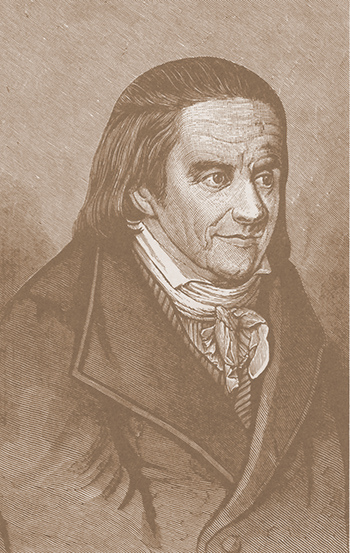 Emile, although a member of the upper class, was taught things which would be considered low class by the aristocracy. He was even "apprenticed" to a carpenter in order to learn how to build a house. Rousseau's philosophy was not popular, and he was banished from France for publishing the education of Emile.

The thread then extends into the next century to Switzerland where Pestalozzi, who set up, among other things, a school on a farm where he planned to educate poor people's children; for this he earned the title of "Father of Elementary Education." But his method of teaching was to have his pupils learn while doing, thus also making him "Father of Vocational Education."

He had tried out his principles by educating his own daughter according to the format Rousseau had suggested for educating Emile. Pestalozzi asked for a government grant from Switzerland to support his school concept, but he was turned down. Without this financial support, he personally paid for the education of his pupils until he ran out of finances. He later set up a private school which he operated for many years.

The system became popular throughout the United States and Europe, particularly England. There even was a Pestalozzian Center in Japan.

Pestalozzi asked for a government grant from Switzerland to support his school but was turned down.

Pestalozzi's chief assistant was Hermann Krusi, whose son, Johann Heinrich Hermann Krusi, Jr., (1817-1903) found his way to Oswego, New York, where he became a faculty member at Oswego Normal School, teaching the Pestalozzian method which the Oswego president tried to adopt as the basis for teacher training at this fountainhead of teacher education in America.

When W.N. Ferris entered Oswego Normal School in 1871, he fell under the influence of Krusi. In his autobiography, Ferris mentions Krusi as the one outstanding teacher who influenced his thinking to develop an educational institute for the working class.

Krusi also taught geometry at Oswego, and Helen Gillespie Ferris, who attended long enough to receive her advanced certificate, also had many courses from him. In her time Helen Ferris was considered the best geometry teacher in Michigan, as attested to by the state superintendent of Public Instruction. Woodbridge and Helen Ferris, much influenced by the Pestalozzian philosophy, carried to Big Rapids this philosophy and used it as a foundation for their Big Rapids Industrial School.

Among the books salvaged from Mr. Ferris' library is a biography of Pestalozzi written in 1875 by the younger Krusi as a tribute to his father, Pestalozzi's long-time associate. Its title is, Pestalozzi: His Life, Works, and Influence.

When the younger Krusi retired from Oswego Normal School in 1887, the Pestalozzian identity began to wane as the normal school concept waxed. Although he died in 1903, Krusi's autobiography, Recollections of My Life, was not published until 1907.

In 1969 Will S. Monroe published a History of the Pestalozzian Movement in the United States. It concluded with a chapter on the St. Louis example from 1868-1880.

Thus the impetus was there for W.N. Ferris to incorporate whatever Pestalozzian theory he saw fit into his school in Big Rapids.

There are many who believe that much of the Pestalozzian push came from Helen G. Ferris. After all, she attended Oswego Normal School for three years and earned a degree while Woodbridge attended little more than a year. As is often the case with wives of domineering men, she probably had a great deal of influence on her husband without his realizing it.


While John Dewey (1859-1952) was developing his philosophy to change the educational system, Woodbridge Nathan Ferris (1853-1928) was building a school by trial-and-error which would become the cornerstone for career, technical/professional education beyond the secondary level. Dewey became internationally famous. W.N. Ferris did not.