Typical of W.N.'s thoroughness in enticing his students to attend his school is a 1901 brochure on the Department of Railway Mail Services.

The brochure claimed that prospects for positions in the Railway Mail Service were growing better each year. The entry level salary of a clerk was $800 per year with advancement to $1,200 possible.

The entry level salary of a clerk was $800 per year with advancement to $1,200 possible.

Said the brochure: "A permanent position commanding $800 a year ought to be a sufficient inducement for any young man to put in 12 weeks of hard work at the Ferris Institute." 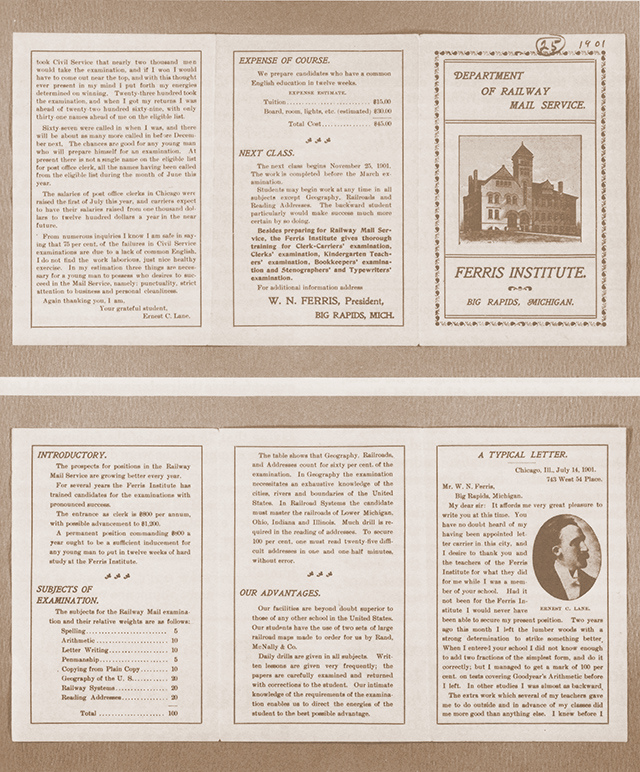 This is one of the first brochures distributed by Ferris Institute to advertise a special program. The letter it carries from Earnest Lane (begun at bottom right and concluded at top left) is typical of letters Mr. Ferris received and published about his school's many special programs.

To pass the address reading examination, the students had to read 25 difficult addresses in one and one-half minutes without error. The brochure reported that much drill was required to learn to read addresses.

To pass the address reading examination, the students had to read 25 difficult addresses in one and one-half minutes without error.

Questions on geography, railroads and addresses counted for 60 percent of the examination.

Completing the information in the brochure was a letter from Ernest C. Lane from a Chicago address thanking Mr. Ferris and the teachers of the Institute for what they did for him while he was a student in the school. Lane had just been appointed letter carrier in Chicago, a position, he said, he never would have been able to secure had it not been for the training he received at the Institute.

"When I entered the school I did not know enough to add two fractions of the simplest form, but I managed to get 100 percent on tests covering arithmetic before I left."

He wrote: "Two years ago this month (July) I left the lumber woods with a strong determination to strike something better.

When I entered the school I did not know enough to add two fractions of the simplest form, but I managed to get 100 percent on tests covering arithmetic before I left.

"The extra work which several of my teachers gave me to do outside and in advance of my classes did me more good than anything else. I knew before I took the Civil Service that nearly 2,000 men and women would take the examination, and if I won I would have to come out near the top, and with this thought ever present in my mind I put forth my energies determined on winning. When I got my returns I was ahead of 2,269 with only 31 names ahead of me on the eligible list.

"Sixty-seven men were called when I was, and there will be about as many more called in before December . . . .

"The salaries of the post office clerks in Chicago were raised the first of July and carriers expect to have their salaries raised from $1,000 to $1,200 a year in the near future.

"From numerous inquiries I know I'm safe in saying that 75 percent of the failures in Civil Service examinations were due to lack of common English . . . . In my estimation three things are necessary for a young man to possess to succeed in the Mail Service, namely: punctuality, strict attention to business and personal cleanliness."

W.N. Ferris couldn't have said it better himself.