The first building, known informally as "Old Main," stood on a slight rise of ground facing north. It was constructed of red brick and roofed with Vermont purple slate laid in fancy patterns. W.N. said that no special effort had been made to construct a showy building, and the style of architecture was in good taste.

The main entrance opened into a hallway. On the right was the principal's office and on the left general offices. This hallway led into the main assembly room, the largest room in the building. At first it was occupied by students of the English, normal and scientific departments.

This assembly room was also the site of the famous "morning exercises."

This assembly room was also the site of the famous "morning exercises," where the students met each school day for lectures, entertainment, and sometimes terse comments from W.N. Ferris. Four classrooms opened from the assembly room.

The basement was divided into a north and south division by a hallway running the length of the building. In the north division were cloak rooms and the elocution and music room. On the south division were the boiler rooms, gymnasium, and chemical and physical laboratories. The gymnasium was just a square room without locker rooms or showers. 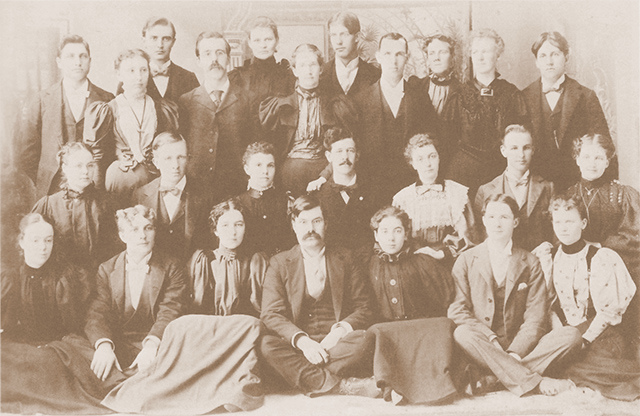 This was B.S. Travis' (bottom row center) physiology class at the Industrial in 1897.

The interior of the building was finished with wainscoting and staircases of natural wood. The floors were of oiled maple. Mr. Ferris claimed the heating system was the most modern and scientific and that an even temperature could be maintained for the greatest degree of health and ventilation.

Mr. Ferris also said that the ventilation of the building was as nearly perfect as the ingenuity of man could make it. He claimed the building could accommodate 600 students comfortably without students having to go to their rooms to study between classes. 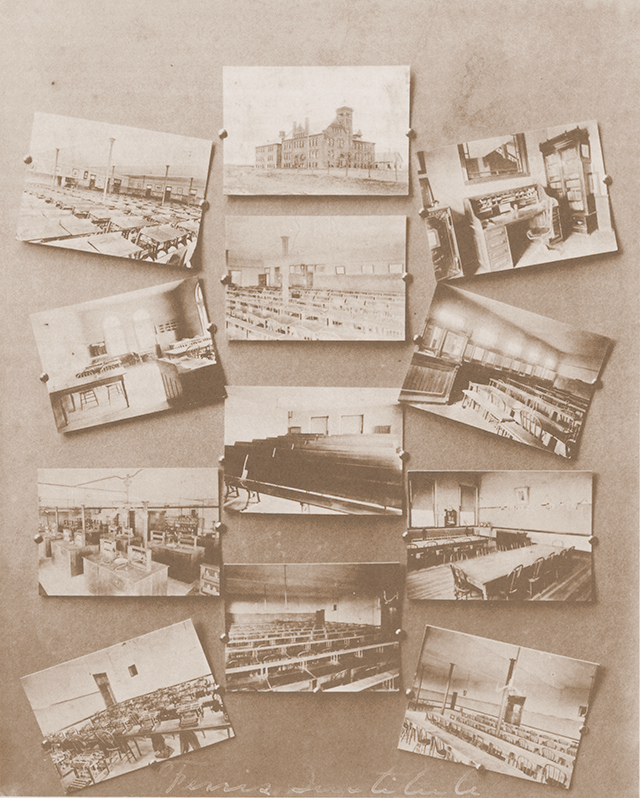 The ventilation of the building was as nearly perfect as the ingenuity of man could make it.

Despite his boast about the ventilation, the basement was evil smelling and the source of many student complaints. Flush toilets were new in 1894, and the toilet rooms, even though they contained flush toilets, smelled no better than outdoor facilities.

W.N. Ferris spent much of his time and money trying to correct the odoriferous toilet rooms. At one point he wrote the contractor that if he couldn't correct the situation, he was taking his toilets outside.

These photos, pinned to a bulletin board, show a variety of interior scenes from the old Main Building on the Ferris Campus. At top right is Mr. Ferris's office, with his desk, safe and book cabinet. Other shots show classrooms in the building, including the general business room (right, second from top), and the typing classroom (bottom left).

The sewer line from the building ran down Ives Avenue to Linden Street, connecting with the existing Big Rapids sewer line which ran directly into the river. The cost of the pipe, line and hookup for the two and a half blocks of the pipeline was approximately $600. Ferris paid half and the city paid half.

It was the custom in those days to put the chemistry and physics labs in the basements of the buildings, and there must have been many times when the burning sulphur of the chemistry lab and the sewer gas of the toilet rooms waged a war.

Pity the poor students in the elocution and music rooms.