A Foundation Is Laid

Debates in the 1892 national election campaigns centered on the Sherman Silver Purchase Act -- the repeal of which helped send the nation into a great depression.

In the spring of 1893, before the depression had become evident in Big Rapids, W.N. Ferris decided to construct a suitable building for his school. It was to be a typical Romanesque Victorian building like hundreds seen on campuses throughout the nation -- three stories high with a tower, decorative arches over some of the windows and the entrances, red brick with limestone window ledges. Except for the tower, there wasn't much gingerbread.

It was to be a typical building like hundreds seen on campuses throughout the nation.

The original design was made to be expandable so that a duplicate wing matching the east one could be erected on the opposite side of the building. 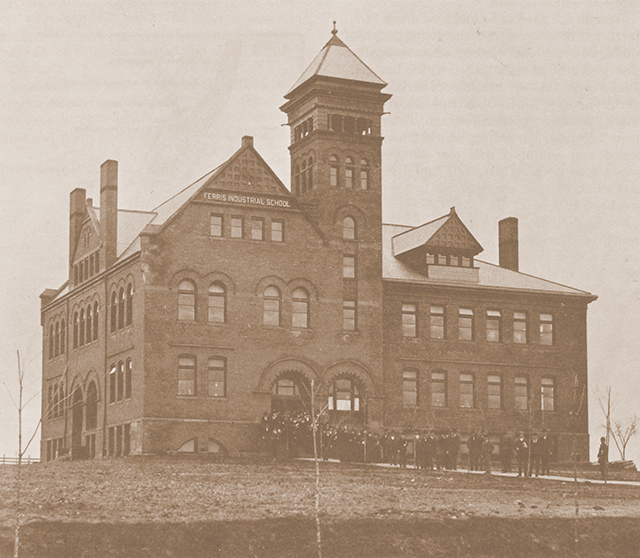 "Old Main," the first building on the Ferris campus, was constructed for approximately $20,000. Architects planned its total floor space to cover 24,027 square feet; at its highest point the tower was 85 feet high.

Total cost of the building was to be about $20,000 with another $10,000 planned for equipment. This would make the facility much more elaborate than Mt. Pleasant's Normal School.

When the foundation and framework for one story of the building was completed, the recession hit Big Rapids, and the Northern Bank of Big Rapids failed. Ferris had something more than $5,000 on deposit in the bank. The building contractor had more than $10,000 worth of material on the ground, and he demanded his payments in accordance with his contracts. 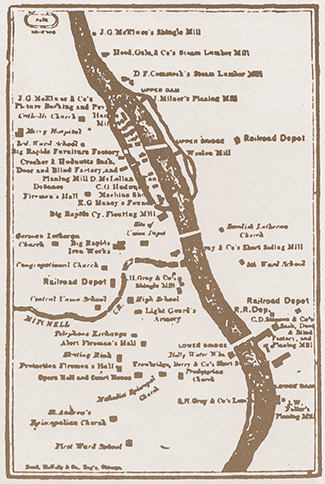 This map of the Muskegon River, made in the 1880's, shows the location of various Big Rapids area businesses. At the time of Mr. Ferris' arrival, the town was a bustling metropolis, with many schools, factories and churches. The lower bridge is the one on Maple Street.

Ferris saw bankruptcy looming, not only for himself but for the builder. The Comstock Bank -- another of Big Rapids' financial institutions -- had not failed, but an appeal to it was turned down. Ferris even tried building and loan associations, which in those days were not as prestigious as banks.

(The Michigan Legislature had passed an enabling act in 1886 which made it attractive to open building and loan associations. By 1892 there were several in Grand Rapids, but one was not established in Big Rapids until the fall of 1894.)

W.N. Ferris' confidence had not entirely left him when it occurred to him that former students could be induced to purchase certificates of stock in small denominations. On July 29, 1893, W.N. Ferris sent out a letter to his former pupils in which he said:

"You do not need to be told how much W.N. Ferris has done to help worthy young people of Michigan to a bread-winning education. After nine years of unremitting toil, he has concluded to devote the remainder of his life to the work of making the INDUSTRIAL SCHOOL a mighty power for good in the land. To this end he is erecting a building which when completed and equipped will cost $30,000. He wants your help. A little self-denial on your part will make you an important factor in this great work."

Mr. Ferris indicated he wanted a $5,000 loan from his former students. Students were to buy certificates of tuition of $10 each at 4 percent interest payable in cash every six months. Face was to be paid in cash on or before five years from date. Every certificate was transferable and after one year could purchase Industrial School tuition at 121/2 percent below regular rates.

Because W.N. Ferris was so concerned that he might die and leave his family without funds, he put a stipulation in the tuition certificate that in the event of his death, certificates would be paid from his life insurance within 90 days.

The pupils came to his rescue and with their pledges and the help of a building and loan association in Detroit, W.N. Ferris was able to construct the building.

The plan for certification of tuition backfired, however, and during the next few years Ferris was wont to complain that holders of the certificates sold them or transferred them to other members of their families. For the next few years, Ferris spoke of how little money he was actually getting out of the school.

The building was dedicated Jan. 1, 1894. Just prior to that dedication day, Ferris wrote to the contractors asking for a check of the building's heating system and complaining of imperfect couplings of the pipes.