Ferris' school was for lumberjacks, miners, farmers' sons and daughters, and girls who worked in Michigan factories -- not for the citizenry of Big Rapids.

In two rented rooms on what then was called the Vandersluis Block on the northeast corner of Michigan Avenue and Elm Street, Ferris opened his school in September, 1884. First he called it the Big Rapids Industrial School, but soon named it the Ferris Industrial School with emphasis on the word industrial. For nearly 20 years it was known merely as "The Industrial."

He insisted that no matter how technically trained they be, students should have a good working knowledge of English.

At first Ferris offered his students training in common English branches -- today known as liberal arts -- and bookkeeping. Though he wished to emphasize the industrial aspect, English was an important subject in his curriculum, and through the years he insisted that no matter how technically trained they be, students must have a good working knowledge of English.

Later that autumn, Ferris opened a night school (or what we now call a continuing education program) which attracted favorable attention from clerical workers around the area. 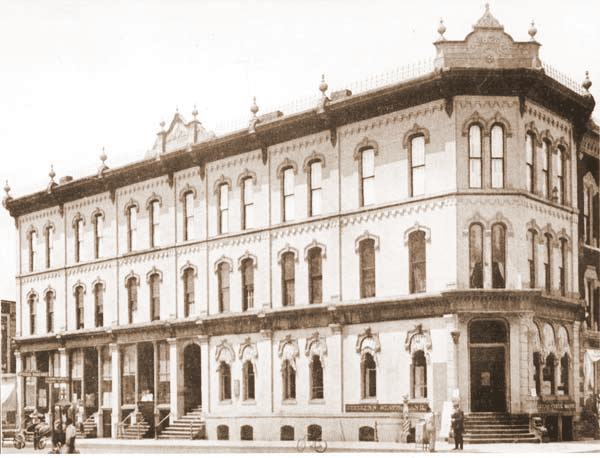 When his first accommodations became too small, W.N. Ferris rented the third floor of this building, then occupied by the Northern Bank, on the northwest corner of Maple and Michigan in downtown Big Rapids. Its architecture was typical of buildings of the time, including the high windows to let in the maximum amount of light and heat in those days before electricity and central heating were common.

With his enrollment grown to more than 100, Ferris soon found his accommodations inadequate, and he made arrangements to rent the third floor of the Northern Bank Building, now the Central Michigan Bank & Trust Building, on Michigan Avenue and Maple Street.

"The first year is altogether the hardest because of not having a home reputation."

In his autobiography, W.N. Ferris admits that he had trouble re-renting his original two rooms. The Masons had occupied this floor for several years and were reluctant to rent these rooms to him because "the Masons did not believe that Ferris Industrial School could long survive."

There were two entrances -- front and back -to the Roof Block classrooms. The front stairs were carpeted, and the men students were not allowed to use the carpeted stairs because they might have mud on their boots or walk too heavily. The front stairway was for the women students who were considered to be more dainty. Only on special occasions could men use the front stairs. This stipulation was written in the lease. 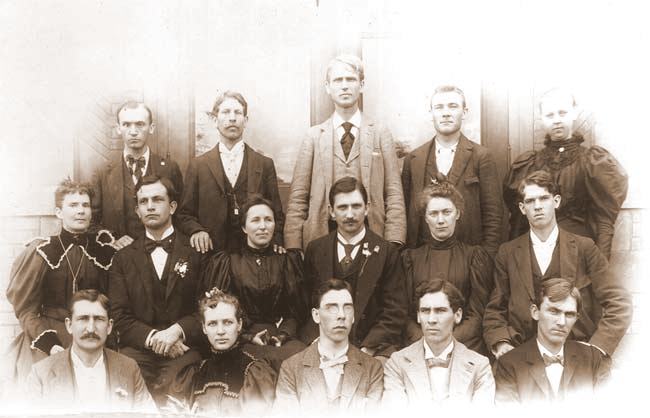 The first teachers at the new industrial school were W.N. Ferris and his wife Helen. The consensus of student population was that Mrs. Ferris was an angel transported directly from heaven to Big Rapids.

W.N. never mentioned it, and he may not have been aware of it, but it was probably Helen Ferris' reputation for gentleness that increased the enrollment.

Good board with room included could be obtained in private homes for as low as $2.50 a week.

W.N. did write a family member that "Nellie" (W.N. was the only one to call her Nellie) works a great part of the day and does her other work except washing. "I work all day and teach at night four evenings a week. The first year is altogether the hardest because of not having a home reputation," he added.

In the beginning, the school's philosophy was distinctly Pestalozzian, and Ferris stressed the importance of bringing out and developing the natural latent powers of the individual, emphasizing the need for an education which would stress how to make a living as much as it would pure intellectual development.

In order to teach subjects about which he knew nothing, W.N. Ferris first had to learn them. He had had classes in what we now refer to as professional education at Owego Normal School near his home, and at Oswego Normal School on Lake Ontario. He also had medical school training at the University of Michigan.

He said that in order to offer shorthand, "I was obliged to master the subject and become the teacher." He himself was not a practical stenographer but he claimed that he was a master of the fine art of clear explanation and thorough drill.

He taught himself to write a fine hand and practiced penmanship regularly. He also taught spelling, but his letters indicate that spelling was not his strongest talent.

Ferris had his own ideas on what constituted factors for success. "There is little or no hope for any young man or young woman who lacks energy -- push, as it is sometimes called," he said.

Good board, with room included, could be obtained in homes with private families for as low as $2.50 a week. Students could rent rooms and board themselves at even lower rates. As yet there was little inside plumbing. Students had to carry in the wood to fuel the stoves which heated their rooms.

Mr. Ferris established very strict rules for the landlords and landladies, especially those who took in women students. Landlords and landladies were required to allow the students one bath a week. If the students wished to take more than one bath in a week, the landladies could charge 10 cents for each additional bath. Of course there was no open visitation. With the landlady's permission, women students could entertain gentlemen callers in the host family's living room on Friday night. About all the togetherness men and women students could have was on Sunday when they could go to church together. Some couples went twice to church -- once in the morning and once at night.

Of course there was no open visitation.

Oftentimes students and their host families would become very close, and the student would correspond with the host family for many years after graduation. 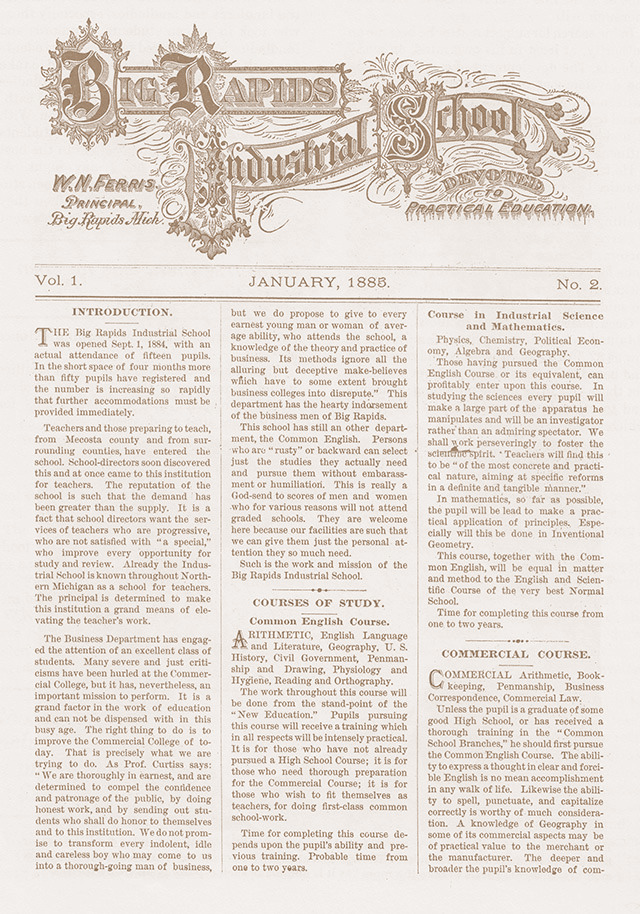 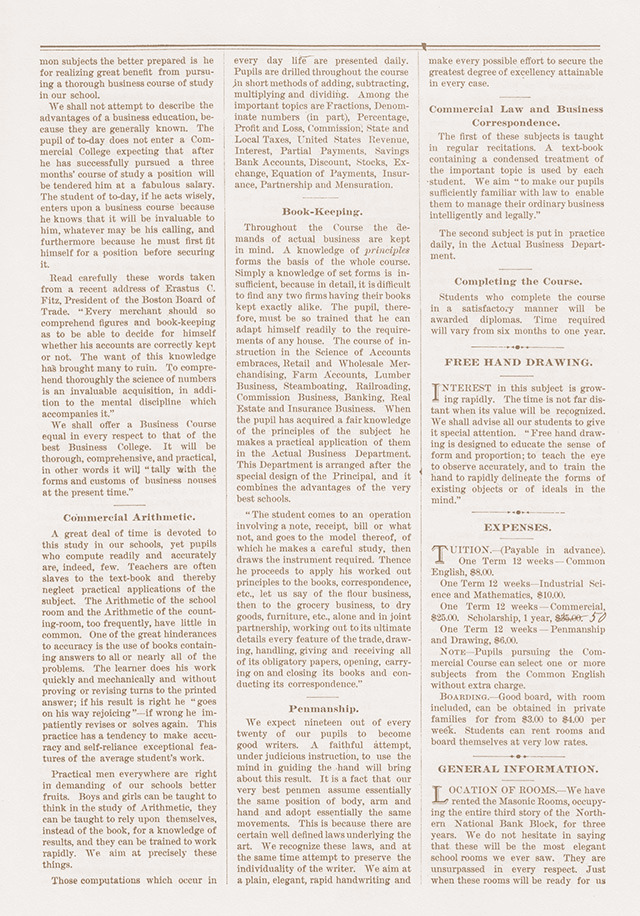 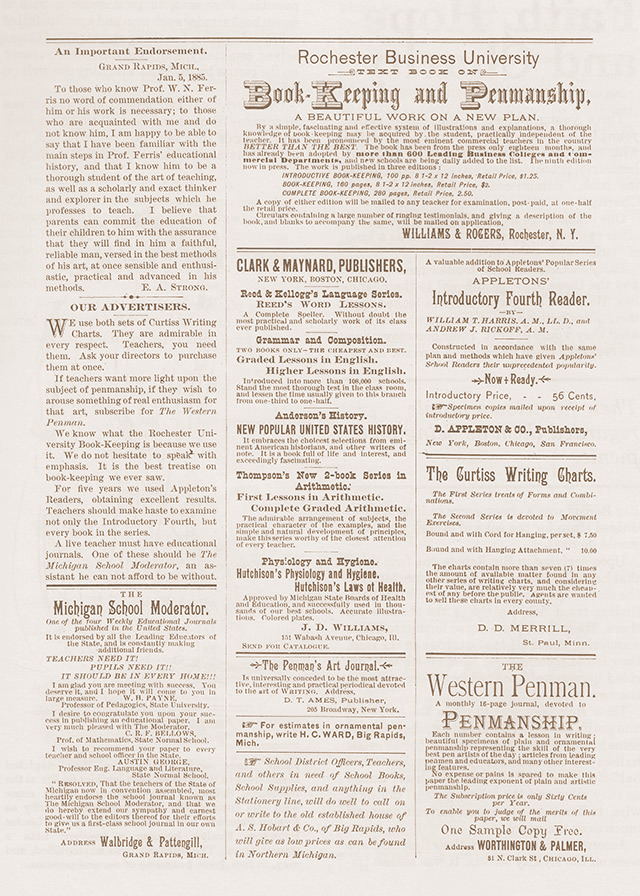