Into the Forest Primeval

What prompted W.N. Ferris to locate his school in Big Rapids remains a mystery.

Ferris said he chose Big Rapids because it was sufficiently far away from colleges, normal schools, business colleges, and academies to eliminate competition. But five years later he said he discovered too late that there was no competition because there was apparently no market.

But the number of coincidences is too great to assume that Ferris threw a dart at a map and came up with a community not yet 30 years old in which to build his school. In the first place, the surveyors of Big Rapids had come from the same area of New York as Ferris. By 1883, more than half of the monied people in Big Rapids had come from the area around New York surrounding Tioga County. Ferris could not have been unaware that "his neighborhood" had moved to Big Rapids.

Another factor which would influence him as an educator was that Michigan -- as both a territory and a state -- had an outstanding educational system, copied by most of the surrounding states, including Illinois where Ferris had located his previous school.

In the 1880's the vast lumbering regions of Michigan were being depleted and Michigan was beginning to be advertised as a vacation spot -- free from what people termed the "ague." 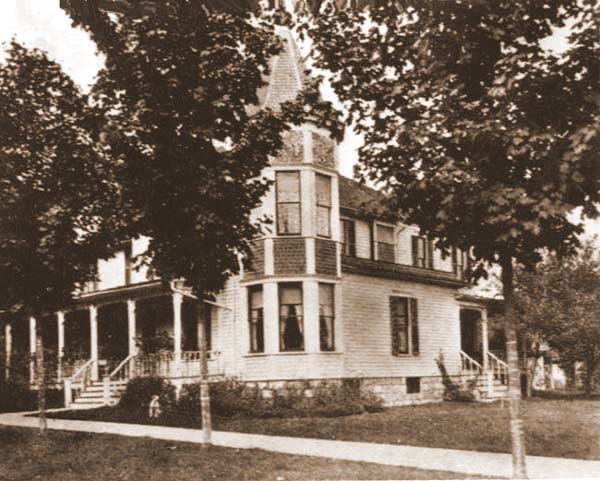 The Ferrises purchased this home in Big Rapids when they came to town in 1884. They paid less than $1,100 for it, not yet completed. 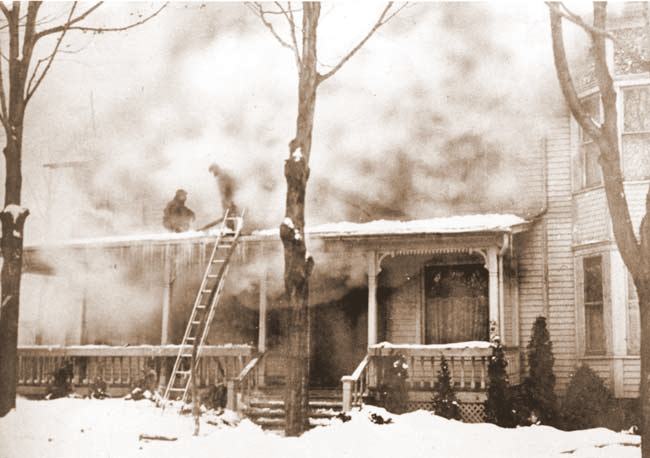 The W.N. Ferris residence burned in January 1938, 10 years after Mr. Ferris' death. The Board of Control purchased a home in 1950 directly across the street from where the home was located to serve as the President's home, but later sold it.

Before making his decision on where to locate his school, Ferris had written to the commissioner of immigration assigned to Emmett and Grand Traverse counties. The commissioner recommended Petoskey, Manistee and Charlevoix as excellent sites for the school.

Ferris apparently didn't choose the Traverse City area because the probable partner for his venture favored Traverse City. Ferris did not have a perfect rapport with his previous partners. In this third attempt, he no doubt favored going solo.

In 1954 Bertha E. Malone of Highland Park, Mich., wrote to the president of Ferris Institute that her father was in a large way responsible for W.N. Ferris bringing his school to Big Rapids. She said that her father was secretary to the school commission and that he had seen Mr. Ferris' ad seeking a location for his school in some educational paper. Malone answered the ad and Ferris came to Big Rapids to see Malone about it.

However, Ferris did not make an appointment, and Malone had gone to Remus for the day. Ferris rode the train to Remus and he and Malone sat on a fence making plans for the school. Ms. Malone's report illustrates how legends get started.

Ferris did write to Malone inquiring about conducting a free summer institute for teachers in the area. His plan was to show what a good teacher he was by conducting the institute, which in those days the public school teachers needed for continuing certification.

Malone replied to Ferris, saying he could see no reason that the public school rooms could not be used for the institute, but that he could not be sure until the school board met the following week.

In the letter Malone said, "Mr. Remus told me this morning that he would write to you this evening about the room. I think you can secure a good room elsewhere if not there."

On May 16, 1884, W.N. Ferris, his wife Helen, and their son Carleton arrived in Big Rapids after a tedious journey from Pittsfield. They did not arrive unannounced. Most of the town thought W.N. Ferris was a lunatic because the Big Rapids public schools were first class under the superintendency of John Crombie. The town fathers approached W.N. Ferris to advise him that Big Rapids was a Republican community and they did not want their children taught by a Democrat.

The town fathers also objected to Mr. Ferris' religious bent -- Congregationalist. They said he would be better accepted if he were Baptist, Episcopalian, Methodist, Presbyterian, or even Catholic.

"Land is cheap, interest is high, workmen get big wages, and everything is lively."

W.N. Ferris, however, was not deterred by the town fathers' opinions. He had complete confidence in himself and his mission. Within a month he had purchased a new home for the sum of $1,087.50. The house was built high along a bank of the Muskegon River on what is now Elm Street.

After "Old Main" was built, Ferris included his house in the inventory of school property. The house burned down in January of 1938.

In the 1950's, after the school became a state college, the Board of Control bought a house directly across the street from the site of W.N. Ferris' home which now serves as the president's home.

In the beginning, W.N. Ferris had nothing but praise for the territory where he was locating his school. He wrote his father saying, "This is wonderful country up here. There is lumber on all sides. Land is cheap, interest is high, workmen get big wages, and everything is lively." Years later he often complained about the "God-forsaken wilderness," wondering why he ever decided to open a school there.