Two more post-war events influenced the life of W.N. Ferris and the school he founded. In 1921 he took his second wife, and in 1922 he was elected to the United States Senate. His second wife was Mary Ethel McCloud, a music teacher from Indianapolis, Indiana. 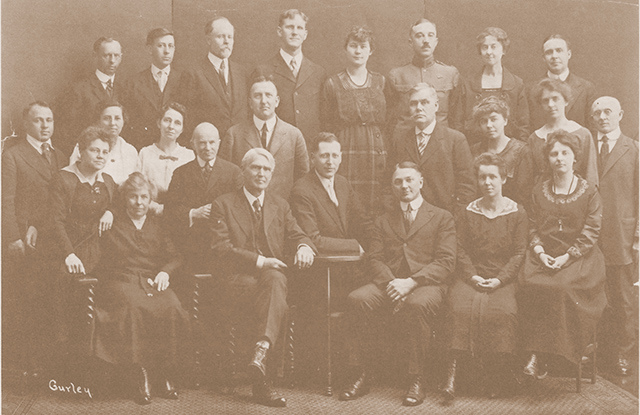 This was an upstairs/downstairs arrangement. Mr. Ferris lived upstairs (or at least that is where his bedroom was) and Mrs. House lived downstairs. It was the epitome of decorum, and even the most ethical of Big Rapids ladies could see no wrong in it.

One of the things Mr. Ferris considered "dog's work" was opening the mail. And except for personal letters, Mrs. House "fetched" the mail and opened all but the personal letters for the five years that she stayed in the house.

But the story did get out that Mrs. House had "set her cap" for Mr. Ferris, as had several other Big Rapids ladies. Mr. Ferris, however, went beyond the environs of the city to find his next wife. He met Mary Ethel McCloud (photo left) in Indianapolis in 1920 at a teachers' institute. 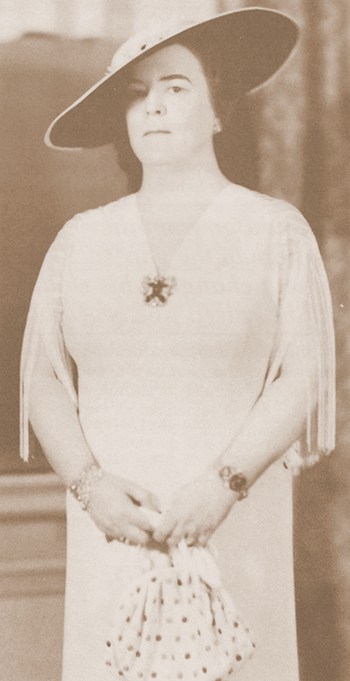 Educated at DePauw University in Indiana and at Northwestern University in Illinois, Miss McCloud was trained for concert work as well as school music. For the 10 years prior to meeting Woodbridge N. Ferris, Mary Ethel McCloud had been a supervisor of music for the state education department of Indiana.

Despite their obvious personality differences, Mr. Ferris began paying court to her almost immediately, and the two were married on Aug. 14, 1921. She was about 35 years his junior. She was also a "grande dame" and he was a "rustic."

In the year that she occupied the president's house as wife of the president of Ferris Institute, Mary Ethel McCloud Ferris entertained frequently, usually with parties that included some sort of musical event which generally put her in the starring role. Sometime guests at the parties were Roy and Dorothy Newton. Mrs. Newton often was asked to play the accompaniment for Mrs. Ferris' vocal solos.

For Big Rapids the parties were "avant garde," not at all like the discreet events hosted by the first Mrs. Ferris.

In 1920 Mi. Ferris allowed himself to be nominated for governor for a third time against his better judgment, but he was defeated. In his words this was "no surprise."

During his term as senator he did not participate in any major debates except on the issue of prohibition.

Mary Ethel McCloud Ferris went with W.N. to Washington where they lived in the Willard Hotel. She basked in the glory of being a senator's wife, giving and attending all sorts of social events. Mr. Ferris accepted this social world with stoicism, participating whenever necessary to make her happy, pointing out repeatedly that he did not enjoy such activities.

Following the senator's death, Mrs. Ferris returned to Big Rapids where she indicated she wanted to be treated as the senator's widow. The Big Rapids citizenry was not too impressed, considering her an eccentric.

Concerned as he was over what would happen to his family in case of his death, W.N. Ferris left his widow a sizable trust fund (she estimated it at $250,000) sufficient to keep her in the style to which she was accustomed. She continued her music studies, toured Europe, and entered politics, running in 1934 for the Democratic nomination for U.S. Representative from the 10th District. She withdrew from the race before the election, however.

Her undoing came about with the Depression and her breaking the stipulation of Mr. Ferris' trust fund by spending the money foolishly. One of her foolish expenditures was her campaign for congresswoman.

She died destitute in Detroit in February, 1954.