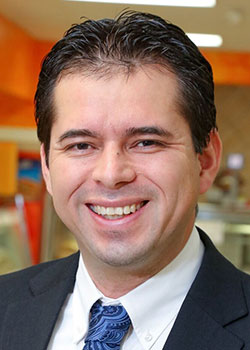 Javier Olvera graduated from Ferris State University’s College of Engineering Technology in 2003. He is the owner and president of Supermercado Mexico, La Tapatía and Mexicana Bakery of Grand Rapids, Michigan.

Olvera, his family and associates acquired the existing La Tapatía in 1996 and Chicago Drive Supermercado Mexico in 2010. In 2011, they broke ground on the Division Street Supermercado Mexico, which later expanded from a grocery to a commercial property. The combined overall growth of Olvera’s enterprises has averaged 28 percent per year since 2006.

Olvera and his family arrived in the United States when he was 16 years old and worked as farm laborers. He had to take additional classes to communicate successfully in English. Since 2010, he has partnered with the Grand Rapids newspaper El Informador to provide jackets and backpacks to children in need. He also provides mentoring, tours and workshops to students of Ferris’ College of Business.