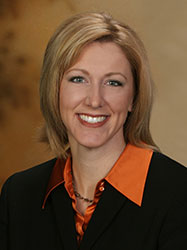 Horn is co-owner and president of ExpertEyes Family Eye Center and Optical in Washington, Mich. She and her husband, Michael Weisgerber, have four children.