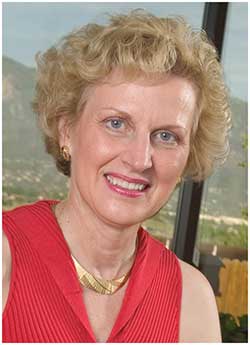 Mary Garvelink graduated from the College of Education and Human Services in 1972. She taught at the University of Colorado at Colorado Springs, Pikes Peak Community College and Colorado Springs Public School District. In 1975, she and her husband, John (ET '71), started a full-service mechanical contracting company, Commercial Design Engineering.

In 1994, Mary Garvelink became CDE’s principal owner and President, and, for more than 40 years, she has been active in the plumbing, heating, and cooling industry. She served on the National Association of Plumbing, Heating and Cooling Contractors Board of Directors from 2001-2004 and in 2004 was elected its national president, marking the first time a woman was elected president of a major national trade organization in the mechanical industry. In 2004, Garvelink received Contracting Business Magazine’s Heating, Ventilation and Air Conditioning Women of the Year Award, and in 2005 she was the first woman to receive the Industry

Person of the Year Award from the International Association of Plumbing and Mechanical Officials. In 2006, she served as the U.S. voting representative on the World Plumbing Council.

Today, Commercial Design Engineering is a Certified Woman- Owned Business that has two offices in Colorado Springs, an office and sheet metal fabrication facility in Grand Junction, Colorado, and an office in Cheyenne, Wyoming. CDE has been involved in hundreds of commercial projects, including award- winning LEED–certified projects. The firm has a 20 percent minority labor force, and women account for 46 percent of its staff. CDE has completed more than $510 million in mechanical work to date.

Garvelink has served on the board of the Future Farmers of America from 1965 to 1968 as one of its first female members, and has served on the boards of Divine Redeemer Church and School (Finance), The Ferris Foundation and the Society of Missionaries of Mercy, of which she has served as president since 2001. The Garvelinks' endowed scholarship supports capital projects and scholarships for the Ferris HVACR program.