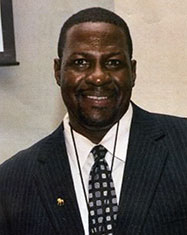 Rollins received a commission from the Michigan Military Academy Army National Guard Officer Candidate School Program at Fort Custer in 1994. He served in various positions with Johnson Controls, Inc. and as an energy engineer and project engineer at the Chrysler Technology Center in Auburn Hills from 1991 to 1995. From 1995 to 2000, Rollins served the Baltimore District U.S. Army Corps of Engineers as the punch-list team leader at the DLA Headquarters Building in Fort Belvoir, Virginia. He served as a prospect course instructor, mechanical engineering team leader and commissioning agent at the Walter Reed Army Institute of Research in Silver Springs, Maryland.

Rollins’ awards include being named the 2010 Executive Professional of the Year for Facility Management and Energy Management by Cambridge Who’s Who. Rollins’ leadership and participation in the International Facility Management Association educational programs includes serving on the IFMA Facility Fusion Conference Program Committees for both Sustainability/Environmental Stewardship and the Emerging Leader Committee. In 2007 and ’08, he was named a Legend in Energy as part of a program sponsored by the Association of Energy Engineers.