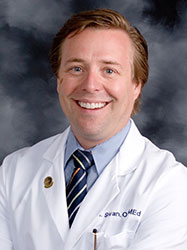 Dr. Mark Swan is a professor at the Michigan College of Optometry at Ferris State University, where he serves as chief of pediatrics and binocular vision services. He is also the chief of optometry at St. Mary's Mercy Medical Center in Grand Rapids, Mich.

Swan earned his doctoral degree in optometry at the Michigan College of Optometry at Ferris State University in 1988. He also earned a master's degree in reading disabilities at the University of California at Berkeley School of Education in 1991.

Swan has served the profession of optometry at the national level having been appointed to several American Optometric Association positions including the Aviation Vision Committee, Health Information Technology and Telemedicine Project Team, Faculty Relations Committee, as well as InfantSEE state coordinator.