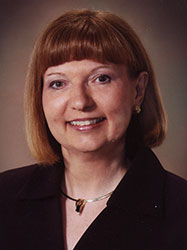 Mary Jane Thomson is a first-generation college graduate who applied her education in the changing workplace, working for several years at Alpena Savings Bank as data processing manager and backroom operations manager, then at Alpena General Hospital as director of Management Information Systems.

For several years she also taught part-time, then in 1997 became instructor of Business/Computer Information Systems at Alpena Community College and in 2007 chairperson of ACC’s Professional Occupations department.

In 2002 and 2005 she was listed in the Who’s Who Among America’s Teachers; in 2007 she received an Endowed Teaching Chair Award from ACC; and in 2008 she received the Distinguished Woman in Higher Education Leadership Award from the Michigan American Council on Education Network.

She also serves Ferris as a member of Ferris’ Honors Program advisory board. Thomson is married to fellow Ferris alumnus, Larry Thomson. They are the parents of Amy, a student in Ferris’ College of Pharmacy, and their daughter, Abigail, and son, Andrew.