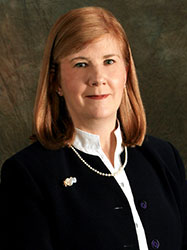 As health policy advisor to the Indiana Office of Medicaid Policy and Planning, Emily (Cramer) Hancock is involved in developing long range plans to manage access to mental health drugs, among other high-profile initiatives. After graduating from Ferris State University in 1976, Hancock began her career as a pharmacist at St. Lawrence Hospital in Lansing, moving two years later to Indianapolis, Ind., where she eventually became senior pharmacist at St. Vincent Hospital.

Her lifelong interest in the therapeutics of disease management for older adults led to an appointment from Indiana Gov. Frank O’Bannon to serve as the pharmacist on the state’s Prescription Drug Advisory Committee, which developed Hoosier Rx — a prescription plan for low-income seniors. Among other awards and honors, she was named Indiana Hospital Pharmacist of the Year in 1995.

In addition to her work with the IOMPP, Hancock serves on the board of directors of the University of Indianapolis’ Center on Aging and Community, the advisory board of the Indiana Division of Disability and Rehabilitative Services, and is also a member of the Indiana Prescription Drug Advisory Committee.

She and her husband, Bruce, established the Cramer Family Endowment at Ferris in 2006. The endowment fund provides unrestricted support to the Michigan College of Optometry and College of Pharmacy.