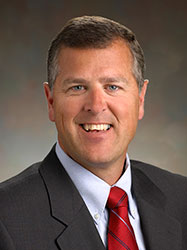 Kenneth G. Lawless, vice president and chief operating officer of Clark Construction Company, has overseen the building of many award-winning projects during his nearly 30 years with the company. Those projects include Oldsmobile Park minor league baseball stadium in Lansing, which won the 1996 AGC Build American Award; Bay Harbor Marina in Petoskey, winner of a 1999 Build Michigan Award; and the Mountain Grand Lodge and Spa and Avalanche Bay Indoor Waterpark in Boyne Falls, which garnered another Build Michigan Award in 2005.

Also in 2005, Lawless became part-owner of Clark Construction Company, and the Engineering News Record selected the company as one of the top 100 Construction Management firms in the nation.

In his 28 years with the company, it has grown from three project managers to 40, and from $10 million in annual revenues to $250 million.

Lawless has been very active in his industry. He is past president of both the Lansing Builders Exchange and Construction Specifications Institute, and past business manager of the Construction Managers Association of America. He is a frequent speaker for the National Association of Women in Construction and is a member of the Affirmative Action Committee at Clark Construction.

Many members of Lawless’ family have attended Ferris, including his grandfather, John, his brother, Steve, and his son, John.