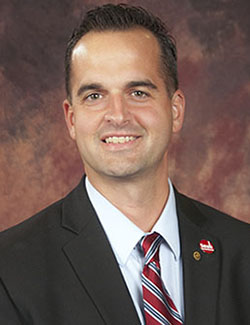 Jon Mandrell, a graduate of Ferris State University's Doctorate in Community College Leadership program, has assumed the presidency of the Tennessee College of Applied Technology, based in Murfreesboro, Tennessee.

Mandrell received unanimous support for his appointment from the Tennessee Board of Regents. He comes to TCAT-Murfreesboro from Sauk Valley Community College in Dixon, Illinois, where he will depart as vice president of Academics and Student Services.

“I have literally spent my entire life at SVCC, as I would visit there as a 4-year-old with my mother, who was on the faculty,” Mandrell said. “I met my wife there, returned as an adjunct faculty member, and through the support of my DCCL training, became an administrator at Sauk Valley. I would not be able to continue my career advancement if it was not for the preparation I received from Ferris’ program. It has certainly changed my life.”

Mandrell said he is encouraged by the focus on industry and community response at TCAT.

“They opened a campus in Smyrna, directly across the road from a Nissan manufacturing plant, that employs 8,400 people,” Mandrell said. “That campus, which is less than two years old, houses the Nissan Training Center in a public-private partnership. TCAT offers a variety of regionally important programs, such as healthcare, pharmacy technology, cosmetology, digital graphic design, administrative office training and surgical technology. I have structured my focus in education with the end in mind, and the DCCL program prepared me to promote and support student success and workforce development. It also taught me to embrace change and innovation, I am hoping to do exactly that at TCAT. The state of Tennessee seems to be very progressive. I feel that TCAT, like many colleges, serves as a lifeblood of our communities.”

Mandrell began his studies as part of Ferris’ third cohort, in 2012, commuting from Illinois along with a SVCC peer, Steve Nunez. Both men graduated from the DCCL program in May 2015.

“I actually switched to the DCCL program after beginning doctoral studies at another institution, because of Ferris’ flexibility and access,” Mandrell said. “Steve will be moving into my role in Academics and Student Services, as we apply what we have learned as instructors, graduate students to benefit our respective faculties and colleges. I have also heard from many of my Ferris classmates, following my appointment, offering calls of congratulation, along with DCCL administrators and instructors.”

Mandrell also plans to contribute to Ferris’ program, as he has accepted a position on the DCCL advisory board.

“With its multi-state focus, the program has really exploded,” Mandrell said. “This is a very timely development, since many leaders of two-year institutions nationally are at, or nearing the end of their careers. I am excited to have the opportunity to support the DCCL in its effort to meet the demands of career and technical education leadership.”