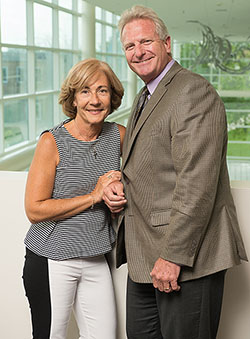 Ferris State University alumnus Jeffrey Rowe received the Michigan Pharmacists Association Pharmacist of the Year Award during the Association's Annual Convention and Exposition at the Detroit Marriott at the Renaissance Center. The award is Michigan's highest honor in the pharmacy profession.

Rowe and his wife, Annette, have always shown the utmost support for the profession and for the development of up-and-coming pharmacists. In 2015, the Rowes donated $1.5 million to Ferris' College of Pharmacy to support the renovation of the Hagerman Pharmacy Building and a scholarship for student pharmacists who are accepted into the Doctor of Pharmacy/Master of Business Administration program at FSU.

He has further been engaged in many areas of pharmacy practice, supported the future of the profession, and volunteered his time and expertise to the MPA and the community. With more than 30 years of experience in the specialty pharmacy industry, Rowe most recently served as executive vice president and a board member for Diplomat Inc., the largest independent specialty pharmacy company in the United States. During his tenure with Diplomat, the company grew from a single location with less than $5 million in revenue to 16 locations and $3 billion in sales. In addition, it became a publicly traded company in the New York Stock Exchange.

Rowe joined Diplomat in 1993 as a staff pharmacist, concentrating on building the organization's compounding and complementary services. He also served as the pharmacy manager from 1997-2006. Before joining Diplomat, he owned two successful independent pharmacies in Genesee County.

In his community, Rowe serves on the board for several non- and for-profit organizations, including St. Luke's New Life Center, a nonprofit dedicated to educating and training at-risk individuals to prepare them for the job market. He currently serves as board president for St. Luke's. Additionally, Rowe is a volunteer at Genesee County Free Clinic.

The Michigan Pharmacists Association, representing the nearly 9,000 pharmacists and 15,000 pharmacy technicians in Michigan, strives to serve members by providing support, advocacy and resources that ultimately improve patient care, safety, health and the practice of pharmacy.