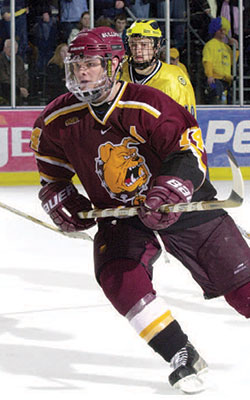 Ten years ago, former hockey standout Chris Kunitz led the Bulldogs to their first-ever Central Collegiate Hockey Association regular- season title and initial NCAA Tournament berth. For his collegiate efforts, the current Pittsburgh Penguins forward was named to the CCHA All-Decade Team, formed to “Celebrate The Legacy” in its 42nd and final season. Due to realignment, starting in fall 2013, the Bulldog men’s ice hockey team will compete in the Western Collegiate Hockey Association.

The All-Decade Team covers 2000-13, to honor the league’s top performers from its final decade of competition. All 12 players selected were All-Americans and graduated to professional careers. Eleven have played or are playing in the National Hockey League.

Kunitz has spent the past four-plus seasons with Pittsburgh, helping the team capture the Stanley Cup in 2009. Prior to joining the Penguins, the Regina, Saskatchewan, native played parts of five seasons with Anaheim, where he twice surpassed the 20-goal and 50-point plateaus. His best season with the Ducks came in 2006-07, when he established career highs offensively in goals (25), assists (35) and points (60), as he helped power Anaheim’s successful quest for the Stanley Cup that year.

As a student at Ferris State, Kunitz excelled during his 2002-03 senior season by garnering American Hockey Coaches Association All-America First-Team honors and was among the final three 2003 finalists for the Hobey Baker Memorial Award as college hockey’s top player. A two-time CCHA First-Team pick, Kunitz became the first Bulldog skater to earn CCHA Player of the Year honors after leading the league in points, goals, assists and plus/minus for the 2002-03 campaign.

Kunitz concluded his stellar career ranking tied for sixth in career points (175), second in goals (99) and 18th in assists (76) in 152 contests. He played an integral role in leading the 2002-03 Bulldogs to a school-best 31-10-1 overall record, the school’s first-ever CCHA regular-season championship title and the program’s first-ever NCAA Division I Championship Tournament appearance. Kunitz also was recognized as the male student-athlete recipient of the 2002-03 Bulldog of the Year Award, which is presented annually to the most outstanding Ferris State student-athlete.