The first Ferris yearbook, known as Crimson and Gold, appeared in 1908 with Rollo Karshner as the editor.

In his editor's note at the opening of the book, Karshner wrote: "The work of the editors of the first yearbook is at an end. We have done the best that our strenuous courses in school would allow. Whether our efforts will meet with approval or something decidedly opposite remains to be seen. We have succeeded in one thing. We have established a precedent, so that those who take up our work next year, being able to proceed more intelligently can get up a book far better than the little one we are now offering."

The 1908 Crimson and Gold listed the names of 27 faculty members, including Mr. Ferris, but it showed pictures of only 25. None was identified. Obviously everyone who bought a 1908 yearbook would know who the faculty members were.

"We have done the best that our strenuous courses would allow."

In 1908 the classes were pretty much separated by department, and the yearbook lists the names of the seniors in each department. Each had its own history and its own record of the year 1908. Each department apparently did its own illustrating, and there is little consistency in the book. 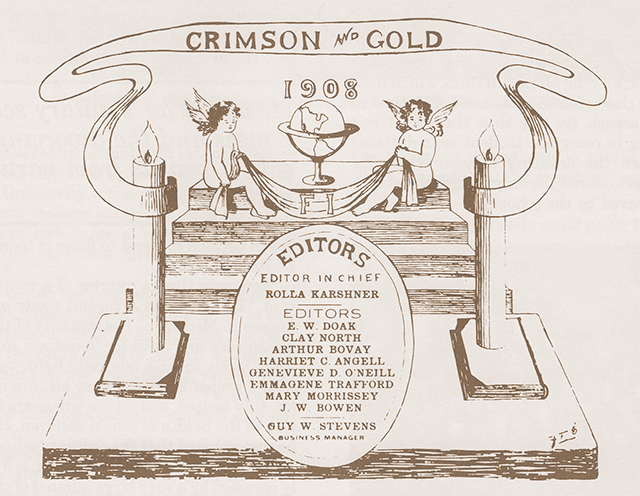 The title page of the first Ferris Yearbook, the 1908 Crimson and gold.

One thing you can say about the class of 1908: it was ahead of its time. The title page for athletics pictures a woman basketball player and a man baseball player, and Miss McNerney's girls' basketball team had feature billing.

But in the description of the athletic programs, there was no mention of women's sports.

A biological lab, from the 1908 yearbook.

The explanation claimed: "While the Ferris Institute does not believe in making athletics the main subject of interest, it encourages manly sports and favors symmetrical development. In the fall football furnishes the attraction. Each department usually has a team while the school as a whole supports a first and second team. 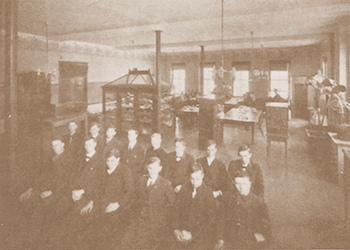 During the winter basketball teams are organized, and in the spring baseball, tennis, and track teams . . . . This year 12 young men took part in the interscholastic meet."

Student organizations listed in 1908 included the YMCA, the Catholic Club, the Monday Night Debating Class, the Wednesday Night Debating Class, the Ferris Cooperative Association, the Upper Peninsula Club, the Wisconsin Club, the Band, the Orchestra, and the Mandolin Club, which indicates the class of 1908 was ahead of its time in another aspect. By this time the school was beginning to recognize student organizations other than the debating classes, which for many years offered the only form of social contact approved by the school.