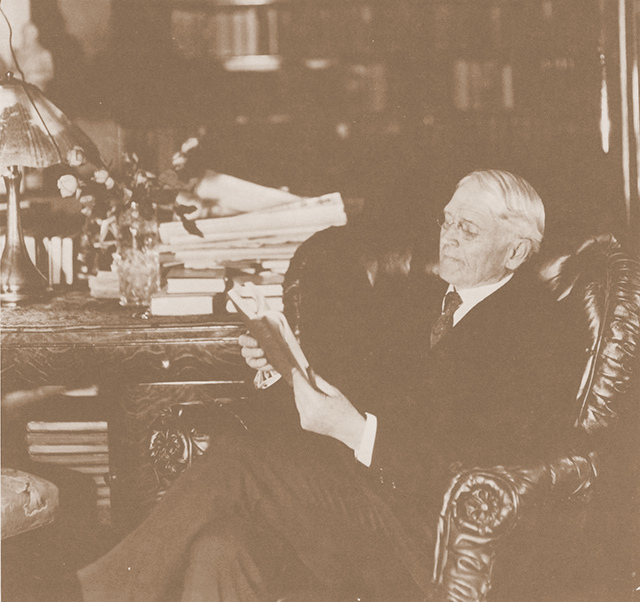 A second -- now often quoted -- section of W.N. Ferris' speech before the Michigan Pioneer and Historical Society that May day in 1916 was his view of education. Said he:

"I came naturally to the spirit of the times in education, in relation to world history; for there is going on today a great revolution in ideas and methods of education. The unprecedented development of science during the last century is responsible in large measure for the modification of our courses of study. It has caused new emphasis to be put on vocational study. It has forced the cry in education today . . . that every boy and every girl shall be trained to earn a living. This qualification is important. And so we are putting a tremendous emphasis upon the vocational feature; but we must not forget that 'earning a living' is but a means to an end. The chief end is 'living.'

"It has caused new emphasis to be put on vocational study."

"In emphasizing how to earn a living, it will be a fatal error if we forget to train our boys and girls in the greatest of arts, the 'art of living.'

. . . "Some of the things that have been pushed into the background of our educational scheme must come into their own again -- history and drama and poetry and music and art, the great cultural subjects, training in which prepares us in the higher sense truly to 'live.' 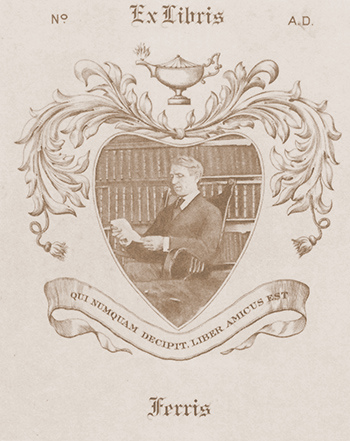 This is W.N. Ferris' bookplate, pasted inside each of his books. The bookplate, typical for the period, carried the Latin inscription which, translated, reads: "Who never takes this book away is may friend."

"The thing I care most about in the education of the future is the education for all the people all the time. It is too bad that the intelligence of this country should longer accept the old traditional view of education as a thing for children only, as a thing to be got through with in our teens and put away on the shelf for emergencies.

". . . Today we have outside of the traditional 'school age' as many people who are worthy of the benefits of our educational system as we have in the traditional classes . . . .

"Our great educational system . . . is applied to only one-third of our citizens . . . . We have not touched the ABC's of this subject, of the possibilities for real efficiency involved in an educational system of this scope which shall educate for personality as well as for instrumentality to satisfy in the highest sense the hungry lives of all the people . . . .

"I believe in the gospel of work . . . the invigorating power of work. We are coming to recognize that no man, even if he inherits his millions, can free himself . . . from the responsibility of actually doing useful and serviceable work. . . .

"I go so far as to say that if we disregard the philosophy of work and accept the theory of education which tens of thousands of fathers and mothers today practically embrace when they send their sons and daughters to our colleges and universities in order that somehow, some way, they may not have to pass through the hardships which are involved in work . . . .

"I drove a nail on the farm because it needed to be driven . . . . I learned the use of tools because I had to . . . . I recognize manual training for its educational value, not for its value in securing a job. But I suppose that I will have been dead a long time before school boards and before school men will dare to give American youth a chance, all of American youth, instead of half of them."

Rousseau's Emile learned to drive a nail because it had to driven.