By the beginning of the third decade, W.N. Ferris was cramming vast quantities of knowledge into his students. Programs required many hours on topics other than the specialty. 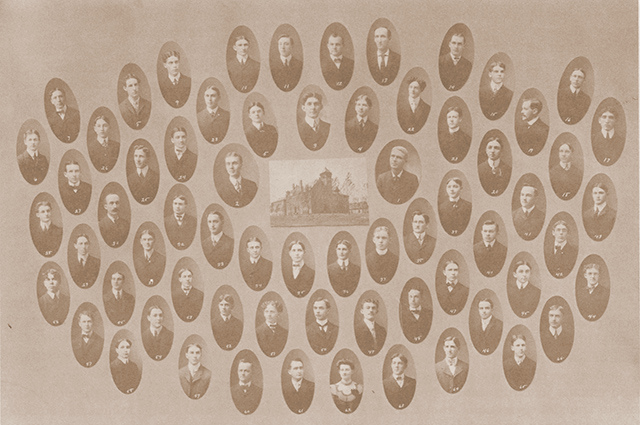 This pharmacy class picture is from the year 1902. Even then, before a school yearbook was produced, class photos were popular items.

In 1904, business training at the Ferris Institute constituted far more than business education, business arithmetic, business correspondence, and penmanship. At Ferris the candidate who did not possess a good English education -- that is to say, who could not spell, capitalize, and punctuate correctly, who was not rapid and accurate in calculations, and who was not a rapid penman -- was not acceptable in the Commercial Department.

This group of well-dressed men at the entrance of Ferris Institute in 1908 is made up of Noel B. Wilkins, Theodore Hamilton, Don M. Griswold, Giles Gibson and James B. Antle.

To graduate, the student had to pass a creditable examination in bookkeeping, banking, business arithmetic, business correspondence, commercial law, commercial geography, mental arithmetic, rapid calculation, spelling and penmanship. Their examination papers had to show that the candidate for graduation possessed a good working knowledge of English. 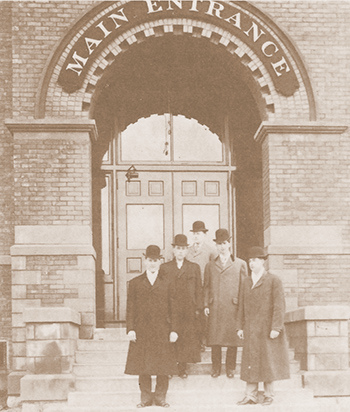 W.N. Ferris was saying, "Young people are turning their attention towards those occupations that pay . . . . Perhaps 90 percent of the graduates of the Ferris Institute are receiving two or three times the salary they could command doing manual labor."

If a student worked six days a week and two or three hours each evening, he could complete the commercial course in six months. The competent student was advised to combine shorthand with his bookkeeping. It was not expensive as far as tuition was concerned, and many businessmen wanted assistants who could take dictation and then arrange and transcribe the same correctly on typewriting machines.

"Young people are turning their attention towards those occupations that pay."

At that time women were not yet common in business establishments, and the programs were oriented toward men. Mr. Ferris felt that an intelligent, conscientious young man was sure of a position provided he mastered shorthand and bookkeeping.

Shortly after the turn of the century, the telegraphic department, which is considered the forerunner of the Trade and Industrial programs of the 50's, had come into full bloom.

The candidate who could not spell, capitalize, and punctuate correctly, who was not rapid and accurate in calculations and who was not a rapid penman was not acceptable in the commercial department.

The days were gone, according to W.N. Ferris, when a man could enter a railroad office and with a few suggestions from a busy operator acquire the necessary skills to become a telegraph operator. 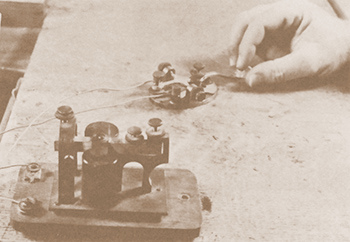 Telegraphy was the forerunner of the school's technical arts program.

The program advocated that a student could learn telegraphy in about six months if he or she practiced 10 hours a day. Descriptions of the course admonished that the telegraphy operators demanded that their employees should have a practical knowledge of English. "Spelling, writing, mental arithmetic, typewriting and the elements of bookkeeping belong to the equipment of a good telegraphy operator," W.N. Ferris said.