We Will Go On!

While the ashes were still hot, students and faculty met on the morning of Feb. 22 in the Big Rapids Theatre. Ralph Pattullo, dean of instruction, told them, "We will go on."

There was a time of suspense while some legislators wondered what to do. The University of Michigan and Michigan State College put pressure on the Legislature to cancel out the Ferris deal and split the appropriation provided for Ferris between them. The U-M and Michigan State College went so far as to ask that the insurance collected, which amounted to $268,539.44 on the burned out school, be divided between them also.

Gov. Williams acted quickly to end all questions. The Act making Ferris Institute a state institution called for the appointment of an eight-member Board of Control to be appointed by the governor and confirmed by the senate. It was to be made up of four Democrats and four Republicans. 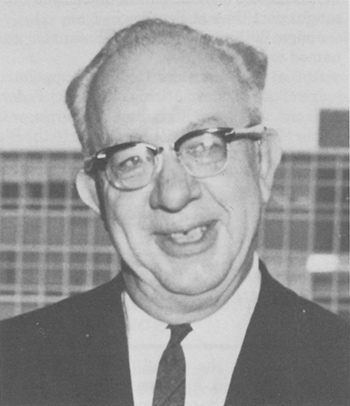 The appointment of Wiggins, who was a teacher at Northern Michigan College of Education, was not confirmed by the Senate. At the vote which was 5 "yes" and 16 "no," it was stated that Wiggins' approach to the job was not in the best interest of the Institute. It was reported that he asked to be put on the Board of Control because he sought a job on the Ferris faculty for himself. He had at one time taught part time at Ferris.

At that time Starr was a federally-appointed judge of the Western Michigan District Federal Court. Fairman, a graduate of Ferris, was owner of a chain of retail pharmacies in the Big Rapids area. He and his father George had been members of the Board of Incorporators.

For a while the campus looked like a gigantic garage sale.

While serving as a member of the Board of Incorporators of the Institute in its private school days, Charles Fairman had been a big plus factor for the school. Whenever repair work was needed, Fairman called the repairmen. Nearly all the repairmen in the area were indebted to Fairman and his father for credit extended at the drug store, and the repairmen were quick to respond to Charles Fairman's requests.

Mrs. Fishman, also a graduate of Ferris, had grown up in Big Rapids and attended public schools there. She had long been identified with many social and civic cultural activities in Grand Rapids. She was particularly interested in developing curriculums which would be attractive to women students. She was named treasurer of the Board. 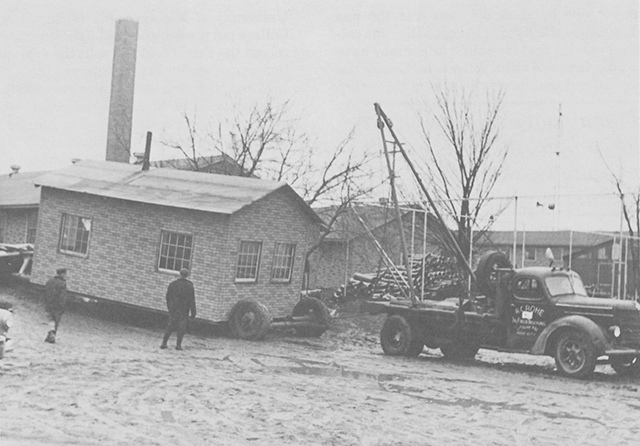 Barracks like this one which were used for student housing prior to the fire, were remodeled for classrooms, laboratory and office facilities after the fire.

Dr. Nye was head of the English Department at Michigan State College. He was a collector of Horatio Alger stories and a recognized expert on Alger. Because the lives of many of the. Ferris students paralleled Alger characters, Dr. Nye probably had a particular empathy for Ferris enrollees.

Col. Vandercook, who was involved in the "Copper Country" strike while W.N. Ferris was governor, had been a newspaperman; an organizer of the Michigan Constabulary, the forerunner organization of the Michigan State Police; and at the time of his Board appointment, was legislative representative for the Michigan Railroads Association. He knew everyone in the Legislature. He served as vice chairman of the Board.

Ward was also a member of the Board of Incorporators. He was a well-established businessman, son of one of the lumber barons of the area. His wife Beulah was the daughter of William P. Nisbett, one of Mr. Ferris' close friends. Nisbett had a big influence on Mr. Ferris' political activities. Nisbett's father was publisher of the Big Rapids Herald. He lived at the corner of State Street and Rust Avenue, where three generations of the family have made their home.

Judge Miller also was a Ferris graduate. At the time of his appointment he was judge of probate, Delta County, Mich. He represented the Upper Peninsula on the Board.

On May 16, 1950 Ferris Institute graduated 335 students, its final class as a private school.

Prakken was an Ann Arbor publisher and specialized in school publications. Of the eight original Board of Control members, he served he longest, completing his last term in February, 1977. After Judge Starr's death in 1968, Prakken served as chairman of the Board until 1972.

Buildings on the Ferris campus bear the names of Judge Starr, Judge Miller, Prakken and Col. Vandercook. (Ward Hall is named for Mary Rood Ward, an aunt by marriage of Eugene Ward and former dean of women at the Institute.)

In those frantic days while the Legislature was wondering what to do with Ferris Institute, all available help went to work in Big Rapids. Students, administrators, and faculty turned barracks, which had served as dormitories, into classrooms and laboratories. Faculty members and administrators found offices in kitchens, storage rooms, and even projection booths around the campus.

Friends of Ferris went into action, too. Other colleges and universities, businesses and individuals gave furniture, laboratory equipment, business machines, books, materials and other things Ferris needed to continue. For a while the campus looked like a gigantic garage sale.

Feb. 21, 1950, was a Tuesday. By the following Monday Ferris was back in operation with approximately 600 students. Only a few did not return to complete the year.

On July 1, 1950, the Institute became a state college of Michigan. The name was not changed from Ferris Institute to Ferris State College, however, until 1963.

On July 1 the old Board of Trustees met with the new Board of Control and the school changed hands quietly, without a formal ceremony.