Optometry and Other Challenges

The College of Optometry had a stormy introduction. (It was called a college because it offered a doctor of optometry degree. The other schools at Ferris only offered baccalaureate degrees.)

Some of the faculty had taken the same tack when plans for the Katke Golf Course and the Ice Arena were announced.

But the approval for the concept of the College of Optometry at Ferris had come from the Legislature in 1974; no budget figure was stipulated, however.

Classes in optometry started in the fall of 1975 despite the fact that Gov. William G. Milliken had said he would veto appropriations for the College's operation, which he did.

There ensued a heated debate between Ewigleben and Milliken, but Milliken was adamant.

At this point there was no way that the College of Optometry could fold its tent and silently steal away. Budgets were revised and students in the original class began their first year of optometry education greatly concerned about what was going to happen to their succeeding years. 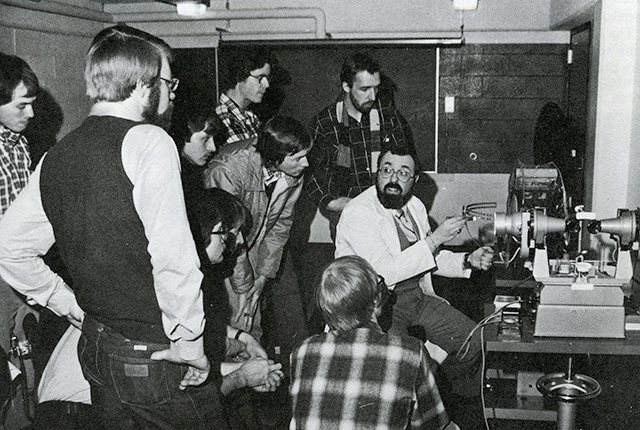 The College of Optometry was started in 1975 amid much controversy. Matters settled down after a time, however, and the new division became a full-fledged part of Ferris. Before Pennock Hall on West Campus was remodeled to house the program, optometry classes were held in the lower floor of the West Building.

Ewigleben was optimistic; and the next year when the funding was granted, it was obvious his optimism had been well founded.

Basically, the conflict was similar to the controversy which had delayed the building of the new School of Pharmacy facility, which had been dedicated in 1972. Political objectors to the Pharmacy Building and the College of Optometry had felt that the scope for clinical practice was too limited in Big Rapids. There was a delay of several years in building the Pharmacy Building, but there was only a year's delay in winning out on the College of Optometry.

When the budget was finally approved, there again was much joy in Mudville; mighty Ewigleben had not struck out.

The recreational facilities ideas initiated by Ewigleben had stormy introductions, too. One was the Katke Golf Course, which opened in 1974, and the other was the Ice Arena, first used for a hockey match in 1976.

Funds for the golf course came from a gift from Mr. and Mrs. Marvin L. Katke. He was a retired Ford Motor executive and a native of Mecosta County who over the years had been generous with his contributions to the College.

The Ice Arena was built with funds collected from special student fees, the same sort of device that was used in building the Rankin Center, the Student Health Center and the Music Activities Center. The residence halls, on the other hand, were financed from money collected from room and board charges.

Ewigleben, however, was able during the first decade of his administration to get public funds for a long-sought-after building for the School of Allied Health.

Funding came from the Economic Development Administration through the state as a special capital improvement. For the building and its equipment, the school got $5,000,000.

Dedicated in 1979, the building was named for President Emeritus Victor F. Spathelf, under whose leadership the school and its program had been initiated. 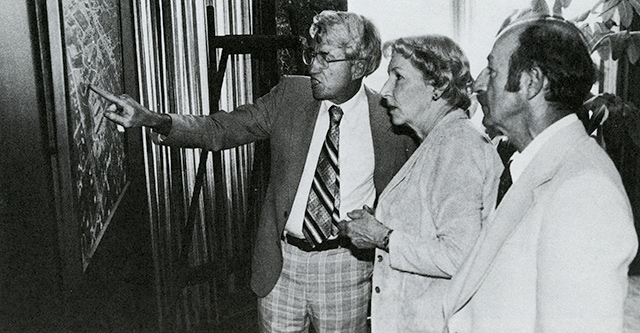 President Ewigleben points out various campus locations on an aerial map of the college to Helen Ferris Vartan, granddaughter of founder Woodbridge N. Ferris. Mrs. Vartan and her husband Eddie made the trip from their home in California in 1980.