When the faculty contracts came out in the summer of 1972, the glamor Ewigleben had accumulated in his first few months at the helm of Ferris began to dissipate.

During the summer of 1972 the College granted a 3 percent increase plus a $200 merit increase on the recommendation of the department head. This averaged out to about 4.5 percent, a figure which was not received with any amount of enthusiasm. The $200 did not apply to everyone (particularly those with full professor rank), and those who did not earn it were even more disgruntled.

(The dilemma occurred because the College's budget request for salaries was heavily eroded by unexpected increases in the amounts needed to be put aside for Ferris contributions to Social Security and state retirement funds.)

However, at Central Michigan University, 45 miles away, faculty had bargained their first contract in 1970, and salaries increased significantly.

On the strength of what was happening at Central Michigan and other colleges and universities around the nation, Ferris' AAUP and the Michigan Education Association contingents began girding themselves for a battle over which organization would become the faculty bargaining agent.

A faculty union, however, was not officially forthcoming until 1973, and that was nearly a year in the making.

In May of 1972, the Ferris Faculty Association (FFA), which was affiliated with the Michigan Education Association, began collecting signatures of personnel who were interested in unionization. At the same time the AAUP also began collecting signatures. Both groups claimed to have 30 percent of the faculty signatures, and the proper papers were filed with the Michigan Employment Relations Committee.

AAUP and MEA girded for battle.

In accordance with due procedures an election was held on Oct. 19, 1972.

At this election, plans for unionization were defeated; 143 of the faculty voted for no union; 137 for the MEA affiliate, and 133 for the AAUP.

After the required three months' wait, a second vote was taken with choice of no union or the MEA/FFA affiliate. Collective bargaining won with 221 persons voting for it and 161 against. A few more than 400 faculty members were eligible to vote, and approximately 87 percent exercised their right.

Among the bargaining tactics was the release of a list of faculty salaries, heretofore held sacrosanct. There had been a rumble in the faculty ranks in 1929 when the salary figures were released, but there was a full-blown storm around campus when the list was first released in the new era. Some faculty members found that friends were making more than they even though credentials were equal, and the friends suddenly were no longer friends.

It had been the policy of the school each year after the state college status was granted to give some contingent a sizable increase. One year it was the faculty, another year the maintenance workers, and another year the clerical workers.

However, after the union was formed most professional staff salaries and fringes were subject to collective bargaining, and the college proceeded each year with this system.

In 1978 the faculty struck in protest of the lack of a new agreement. A strike of the professional staff had been unprecedented, but a strike among nonprofessional workers was not. Food service workers and the maintenance workers belonging to the American Federation of State, County and Municipal Employees (AFSCME) had first struck in 1969 and again in 1972 when the faculty was in the process of considering its union.

The faculty walked out at the start of the school year, picketing the campus during the first few days of classes. Most joined in, but a few attended their classes as scheduled. Some merely stayed home. They didn't want to picket, but they wanted to show support for the union. 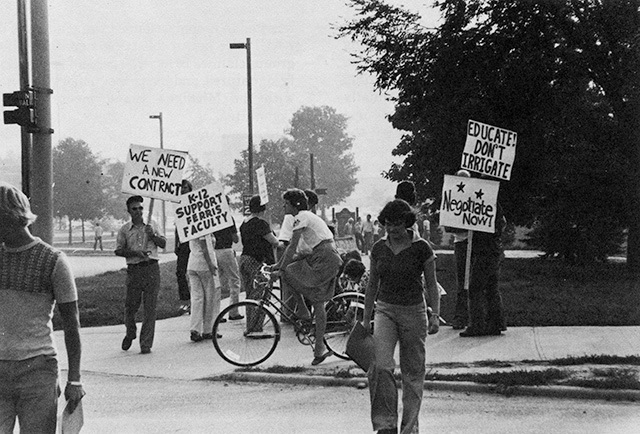 This was on a Monday morning; on Wednesday afternoon Circuit Judge Lawrence J. Root ordered the striking faculty back to work while a factfinder studied the matter and prepared recommendations. Root's action was agreed to by both the teachers and the school.

The faculty agreed to teach while mediation was conducted and to make up the time lost during picketing both in classroom time and office hours.

Some tensions continued, but so did negotiations and a mutually agreeable contract was eventually worked out.