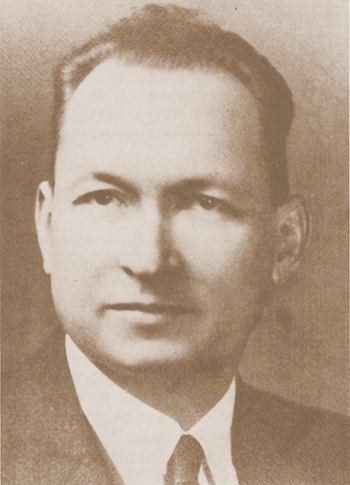 Merle S. Ward was a paradox. He was highly educated, holding two bachelor's degrees, one from Indiana University which for a long time billed itself as the mother of college presidents. He also had a master's degree and a Ph.D. degree from Columbia University.

He all but turned the Institute into a liberal arts college.

Ward's doctoral dissertation was entitled, Philosophies Current in the Deanship of the Liberal Arts College, and although he kept preaching that Ferris should be a technical school, he all but turned it into a liberal arts college. But he did set in motion plans for trades programs in refrigeration, electrical appliance repair, drafting, retail store management, and watch and clock repairing.

In the early 30's, when the pharmacy program had to be expanded to four years, trustees were saying that Ferris Institute was not to be a degree-granting institution. Ward had been president for less than two years when he proposed a master's degree course in the College of Pharmacy. He also pushed for a fullblown music program saying "the time is ripe for a Conservatory of Music." There was a rumor that he was partial to Hazel Holmgren, the music teacher. He organized the school under five heads with a dean for each one.

He established a library with a qualified librarian, raising the acquisition list from 3,000 to 13,000 volumes. He was an excellent speaker, making a good impression on his audiences, and like Mr. Ferris, made numerous public speeches. He organized alumni clubs and made the first effort in the school's history to gather alumni at spots off campus. Even the Ferris Cooperative Association had not attempted to organize alumni off-campus activities.

He was interested in recruiting athletes, and he took the Institute out of the Michigan Ontario Conference and into the Michigan Intercollegiate Athletic Association. He also got Works Progress Administration (WPA) funds for building an athletic field.

There are some reports that on occasion he reduced his own salary so he could hire some other teachers.

Unfortunately, he grated on some people and was a poor administrator. At one time there were signs painted on the campus buildings urging that Ward be fired.

The school wasn't ready to become a liberal arts college. Enrollment was down to fewer than 400 students. The bachelor's program in pharmacy was hurting, and a master's program would have been a farce.

It was almost impossible for students to get in to see him, and he insulted the alumni by sometimes going to sleep during their meetings. He forced the faculty to join the Michigan Education Association, and on many occasions he was undiplomatic with them.

He reduced his own salary so he could hire some other teachers.

In the MIAA conference, freshmen could not play varsity sports. Since Ferris enrollees were generally first-year students, the athletic teams had few players. He got the WPA grant for the stadium because Big Rapids had refused it on the grounds that the community could not afford it. Ferris hardly needed it. 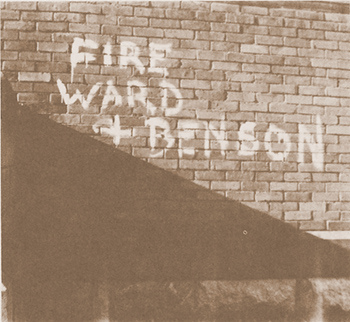 Merle S. Ward was not the most popular president to serve the Institute. During his l0'year term (1936-46), he was under attack several times. One year someone, presumably a student, painted the buildings with signs expressing displeasure with the way things were going. Simon Benson was the dean of pharmacy at the time. The students were particularly upset about Ward's athletic policies. Benson was a physical therapist as well as a pharmacist and served as athletic trainer.

The first two raises he got for the teachers were very small. He talked the Board of Trustees into a third raise for the teachers, but he got a $10,000 matching grant from the Rackham Foundation to be used for the student loan fund. Because the Institute didn't have any funds to match the grant, the faculty in effect were asked to give back their raises to provide the matching funds.

There was an endowment fund campaign set up to augment the tuition in years when the enrollment should drop. Mrs. Ward was a great champion of the Endowment Fund and made candy which was considered very good by the citizenry of Big Rapids. She sometimes invited the faculty to a presidential reception and then sold the candy to the guests. A report of her candy making for the Christmas season of 1941 relates that she made 300 pounds of dipped chocolate creams, but the cost of materials and boxes was so high that she netted only $22 which she gave to the Endowment Fund.

World War II was much more devastating to the Institute than was World War I. Tn 1944, enrollment had dropped to 48 students. A dozen faculty members, including the president, remained to teach them. To raise money, the school sold its football and band uniforms.

A member of the Board of Trustees called the student body together at a morning exercise, assuring them that the Institute would continue.

This was the worst year. By the time Ward left the presidency, things were slightly on the upswing.

Ward left in April of 1946 over a misunderstanding with the Board of Trustees. In his resignation letter he said that he felt an obligation to remain at Ferris during the critical years of austerity, but now that it was assured that the college would not go under, he felt he could resign. He went to Valley City, North Dakota, as superintendent of schools.

The faculty was asked to give back their raises to provide the matching funds.

The trustees immediately began looking for a replacement. Someone suggested Byron J. Brophy who was pursuing a doctorate at the University of Michigan, having completed all the work except the dissertation.