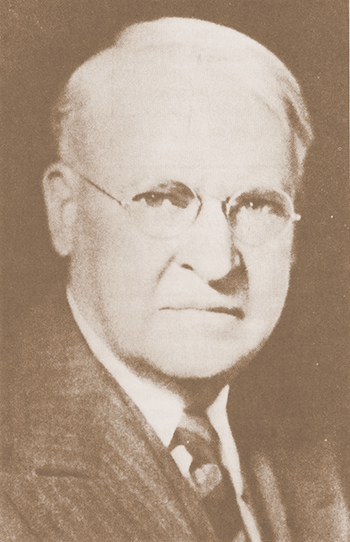 Things went from bad to worse at the Institute. The March 29, 1931, financial statement showed a deficit of $559.20 and an enrollment of only 578 students.

On Aug. 25, 1931, the trustees decided to "sell" the stock in the school to a group of 39 Big Rapids businessmen who were to perpetuate the school as a non-profit, non-stock organization. Non-profit it was.

The 39 businessmen, who called themselves the Board of Incorporators, elected to have the Institute controlled by a board of trustees consisting of Roy Buck, Arthur J. Butler, William C. Taggart, Floyd H. Bouck, George F. Fair-man, Ray H. Waters, James B. Campbell, M.D., Willis C. Judson and William F. Turner. Turner was named chairman of the Board, with Buck as vice-chairman and Butler as secretary and treasurer.

Big Rapids businessmen were to perpetuate the school as a non-profit, non-stock organization. Non-profit it was.

The trustees chose as the administrators of the school's affairs E.M. Clark, chairman; Dean E.J. Parr, business manager; and Dean Karl G. Merrill, secretary. As chairman, Dr. Clark was acting president of the school. By this time Travis had been relieved of his duties as secretary-treasurer and had returned to full-time teaching.

Bills accumulated, deficits grew, and the Institute kept afloat by robbing Peter to pay Paul and by discounting the bills as much as the incorporators could get away with.

The 39 businessmen who took over the responsiblity of keeping the school alive were:

The assets of the Ferris Institute corporation were conveyed to this group of incorporators for the sum of $36,350 to be paid out of tuition, fees and other legitimate income arising from conducting the school.

However, there were approximately $18,000 in current bills and $19,000 due against the building. The stocks were supposed to pay 6 percent interest.

The prospects were indeed grim.

Membership in the Board of Incorporators changed some throughout the years as circumstances intervened, but many of this original group were on hand when the school was transferred to state control.