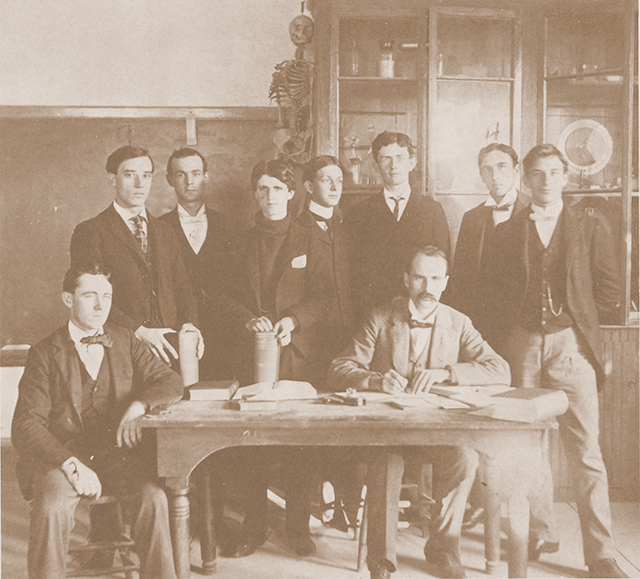 A group of Ferris pharmacy students from 1898 cluster around Professor Will D. Henderson. Pictured with the professor are Frank Terrel, Claude Harvey, G.W. Cox, Floyd Wren, George Stickney, Ernest Royce, L.L. Martin, and a Mr. Wilson. The scene is the chemistry room.

By 1904, 10 years after the first student had enrolled in the program, the study of pharmacy had become one of the more important facets of the Ferris Institute. The Pharmacy Department was the one which was making money.

"The work of the department of pharmacy is the outgrowth of a number of years of actual experience in preparing students for pharmacy. In outlining the work, an effort has been made to prepare a course of study that is practical, systematic and thorough -- a course not too elaborate and advanced for the student who needs to begin at the foundation, yet complete enough for the student who wishes to become a thorough and practical pharmacist. 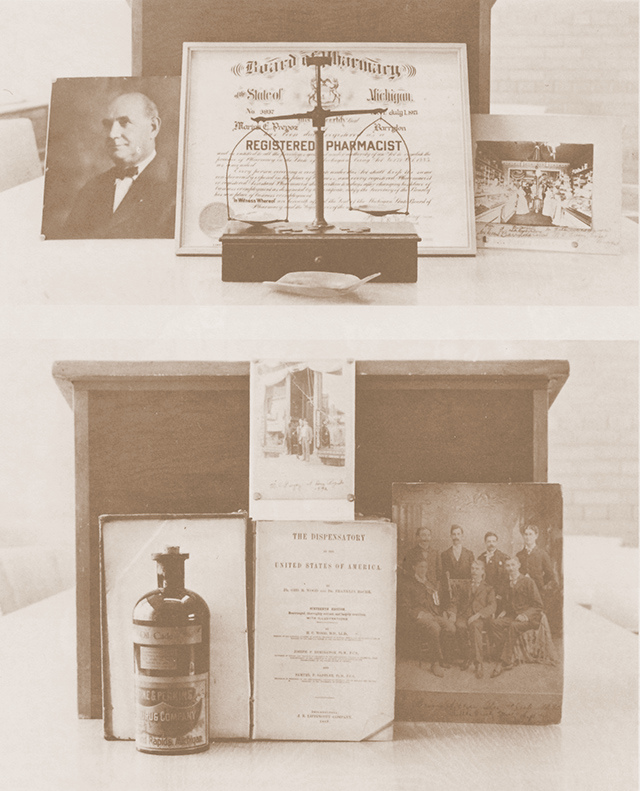 The Ferris School of Pharmacy had its beginnings nine years after the Industrial School opened. In 1893, Marius Preysz of Barryton (near Big Rapids) asked W.N. Ferris for special training to prepare him for the state Board of Pharmacy examination. After Preysz's success, several other prospective students approached Ferris for similar training and thus the program was developed. These displays were prepared by pharmacy students for a 75th anniversary history and show Preyxz, his registration document, and some early equipment used in pharmacy instruction.

"According to the requirements of the State Board of Pharmacy, candidates for examination as registered pharmacists who do not present a certificate from an accredited school of pharmacy must have at least three year's actual experience compounding drugs in a retail drug store, under the supervision of a registered pharmacist. For assistant, two years' experience is required. Students, however, may offer one year's experience in a store and 18 months' work in the department of pharmacy of an accredited school for registered, and begin at the foundation, yet complete one year's experience, together with nine months' school work for assistant pharmacist."

In the two year program, the courses of study included pharmacy, general chemistry, botany, Latin, analytical (quantitative) chemistry, organic chemistry, official pharmacy, pharmacognosy and materia medica, physiology, prescription practice, incompatibilities, and review. Latin was required because the prescriptions were written in Latin. In the days when a person could be registered through apprenticeship programs, there were many stories of the high school Latin teacher giving blocks of time to the local pharmacy apprentice so that he could pass his state board examinations.

Latin was required because prescriptions were written in Latin.

The study of pharmacy at Ferris was an outgrowth of W.N. Ferris' year in the University of Michigan medical school. In 1893 Marius Preysz of Barryton asked W.N. Ferris for special training in the subject of pharmacy to prepare himself for the State Board Examination. Ferris reasoned that with his medical school background he could do it, and do it he did.

After the Preysz experiment, other students began to enroll in the Ferris Industrial School to prepare for their state boards. By 1901, despite his apprehension over the hazards of building the first stage of the main building, Ferris began work on a new building, referred to as the annex, to be the center for the study of pharmacy. 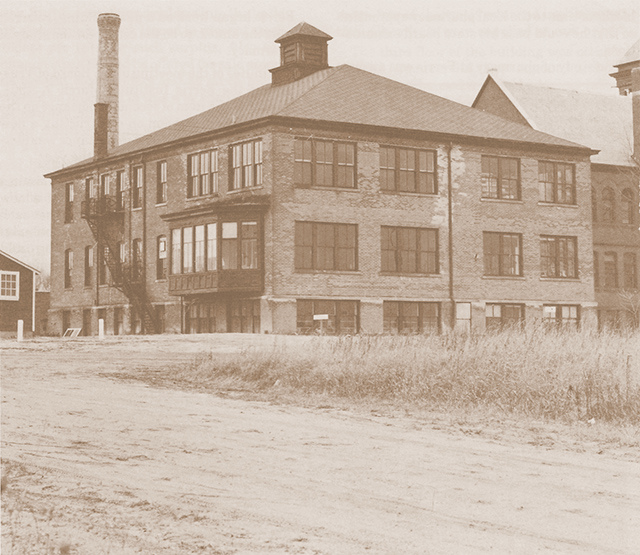 Fees garnered from the new program in pharmacy soon helped balance the school's budget, and in 1901 Mr. Ferris decided to build a second building, called the annex. Pharmacy instruction occupied the entire first floor of the building. This is the way the building looked shortly after is was completed. The front entrance was but a passageway away from the main building.

Minutes of the meeting of the Board of Trustees of the Ferris Institute, March 7, 1901, show that the item of second importance on the agenda was discussion on constructing a new building. The item of first importance was election of officers of the board for the year. 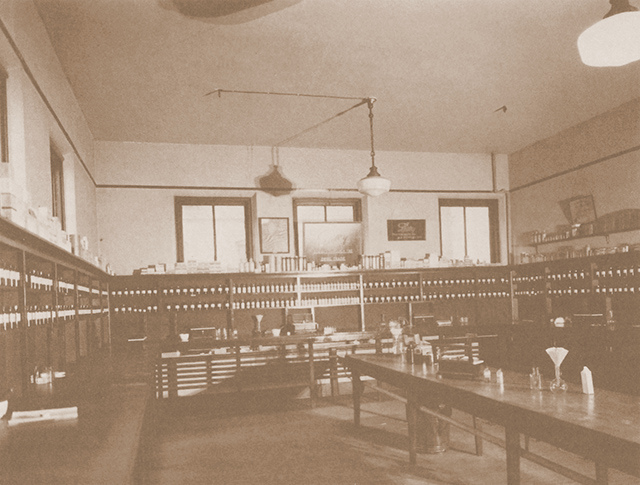 One of the classrooms in the new annex.

Any additional sum required for the building was to be borrowed by the Institute and paid back out of the future earnings of the institution.

Before adjournment Trustee George Fairman subscribed for $1,000 worth of common stock; President Ferris for $1,500 worth.

The Pharmacy Department occupied the entire first floor of the new building, which was described thus:

"It consists of a lecture room, capable of seating 75 students, with a table suitable for classroom experiments. Adjoining the lecture room is the main laboratory which will accommodate 85 students. Work is carried on there in various branches of pharmacy and chemistry. A special Prescription Department is also part of the laboratory equipment. The supply room is conveniently arranged in connection with the laboratory. A complete scale room and separate laboratory are furnished for quantitative analysis and organic synthesis. Students taking laboratory work are furnished with a desk, which is supplied with nearly all the necessary apparatus for the various experiments. Any apparatus that is not in the student's desk can be borrowed by the supply room, free of charge, if returned in good condition. Chemicals were supplied at cost price."

Three of the Ferris students who applied for examination in Grand Rapids were rejected.

The third floor of the building was occupied by the Commercial Department, and the second floor housed a large biological laboratory and the kindergarten training school. Facilities of the two buildings allowed for the school to accommodate 1,000 students.

Developing the Pharmacy Department was no small undertaking, and in February, 1898 a minor crisis occurred which set W.N.'s pen in motion.

To one he said, "If the privileges I have had in Pharmacy for the past three or four years can be continued, I can make the Pharmacy Department worthy of your honorable board. This school is without support of the state. It is without endowment. In 14 years I have built up a novel enterprise here, and I want to keep in touch with every educational board of the state."

Another got the message with this documentation: "The truth of the matter is, Prof. W.D. Henderson, who received his science training at Michigan University has built up this department until now it gives promise of good results. We secure a class of students that cannot on account of money limitations enter Michigan University. They are men who make a sacrifice. They are men who not infrequently take up preparatory work before taking pharmacy. It is true that they are not always scholarly men. It seems to me, however, that it would not be wise to stand in the way of this class of young men."