By 1888 teaching and administering at the growing school became more than W.N. Ferris could handle comfortably with the help of his wife, and he hired a third teacher -- Mrs. Anna Pease, wife of the local pharmacist, physician, surgeon, and real estate salesman for the area. Dr. Pease's mother was one of the New York (Steuben County) natives who helped settle Big Rapids.

Mrs. Pease's contract, the first employment agreement of the institution, was signed Feb. 23, 1888. It shows how much W.N. Ferris expected of his teachers. For the first six weeks, Mrs. Pease was to teach three hours each morning of each school day. She was to be paid $50 for every four weeks of actual service during the first period. Translated into hours that meant that she was paid a fraction over 20 cents an hour.

Mrs. Pease was to be paid $50 for every four seeks of actual service.

If Mr. Ferris liked her work, and apparently he did, Mrs. Pease was to get more money for the next term. Asking that she teach as many hours as he required, but not exceed four and a fourth hours a day, Mr. Ferris agreed to pay her $100 at the end of the term. But when she began a full term of teaching in September of 1888, she was to teach three hours a day each school day, getting paid $50 each four weeks.

Anna Pease was a dedicated teacher who did not let her husband and family interfere with her profession. In the 1886-87 school year she was preceptress (female principal) at the Big Rapids school for $700 a year. 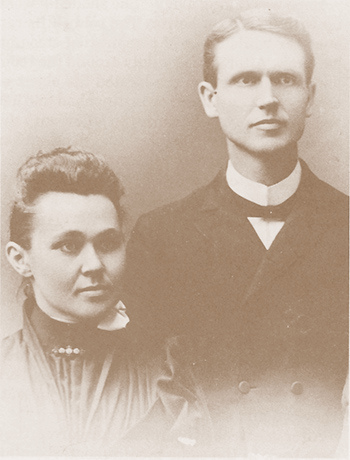 Mrs. Anna Pease (left above), posing with W.N. Ferris was the first teacher hired by the Ferrises for their school.

Before her marriage in 1878, Anna Gerls (Pease) had been a teacher in the Greenville, Mich., public schools. Her father was also a New York native, having come to Michigan from Albany.

In her biography it is reported that Anna Pease's earliest ambition in life was to enter the ranks of public education, and she channeled her every energy to this purpose. She began her teaching career in Mecosta County at the age of 14 and alternated at school as a student and as a teacher until she was 19 years old when she was graduated from Greenville High School.

Before her appointment to the Big Rapids school system, she had served as a preceptress at a school at Stanton, Mich., and as superintendent of a school at Howard City. She also taught at Greenville.

The superintendent of schools at Greenville said of her, "She is a willing and faithful worker and presents to her pupils the example of a blameless Christian lady in her every-day life."

Anna Pease was precursor of another movement -- that of a wife working to support her husband through school. While she was earning her family's support teaching at the Ferris Industrial School, her husband J.F. Pease went to Chicago where he took a four-year course in medicine at the Rush Medical College, an affiliate of Chicago University. he received a diploma as a doctor of medicine and a graduate in pharmacy and took special courses in diseases of the eye, ear, throat, and lungs and also in clinical gynecology, receiving diplomas in each of these specialties. (As owner of the local drug store and as a practicing physician he was very successful and became a stockholder in several of the town's manufacturing institutions. He also did considerable business in real estate.)

There is no report that she spent much time with her husband after she enrolled at Northwestern University. In the summers she served as tour director on European cruises, one of the first women to undertake such a position.

She taught for 16 years at Northwestern, taking some time off to attend Yale University. She was given an honorary degree by the University of Chicago. At the time of her death in 1937, she was living on a 1,200 acre estate in Dutchess County, N.Y., purchased for her by her late husband.