He said: "Experience proves that the welfare of the people in their relations to banking institutions cannot be too carefully guarded. State banks and national banks are subject to state and national supervision. In spite of this supervision, there is a feeling that further steps should be taken to secure depositors. While I would not recommend extreme legislation for further protection of the depositer, I do believe that this subject should receive careful consideration in the hands of the Legislature. I can see no reason why private banks should not have state supervision and be required, on call, to file statements. Under no circumstances would I say legislate so as to imperil the progress and development of small banks. There are communities where the needs of the people make small banks a necessity. The interests of the people in these villages, however, should be as carefully guarded as are the interests of the people in larger cities." 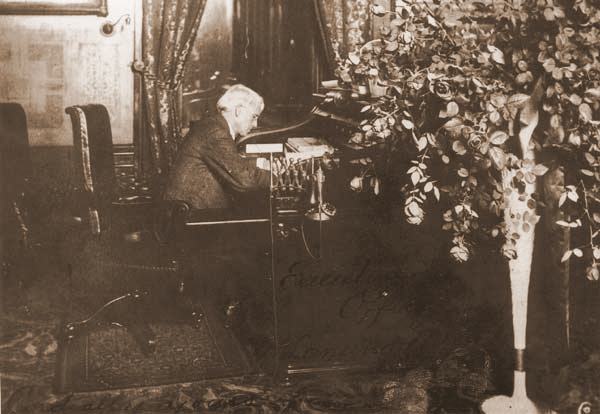 This is apparently the only photograph of W.N. Ferris in the governor's office in Lansing. The office was completely modern for the time, with an extendable telephone, small reading light and a dried flower arrangement.

Once again Mr. Ferris was ahead of his time. In 1933 the Federal Banking Act created the Federal Deposit Insurance Corporation, which at first insured accounts up to $5,000.

Among the problems created by the rush of settlers to Michigan in the 1830's was the establishment of a number of shaky banks, making Michigan banking a sort of laughingstock among money lenders.

"Experience proves that the welfare of the people in their relationships to banking institutions cannot be too carefully guarded."

Thus in 1837 the newly-elected state Legislature, in special session, passed the Michigan General Banking Law, the first of its kind in the nation. This law empowered any 12 landowners to form a banking association by applying to a county clerk and treasurer. Capital stock of not less than $50,000 was to be subscribed and 30 percent was to be paid in specie before the bank could open its doors for business.

Mr. Ferris' $13,000 plus the remaining shares purchased by the stockholders provided this 30 percent in 1902 when the Big Rapids Savings Bank opened its doors.

In 1924 Mr. Ferris addressed the Michigan Bankers' Association, saying: "Although I have been president of the Big Rapids bank for 20 years, I don't like banking. I dislike banking because of the inhumanity that is bred into it. It has long been my endeavor to develop in the business a certain helpfulness to its patrons as well as to take out dividends in cash.

"I don't like to stand there to take in the money and 'hook' those who come to do business with me using three-quarters of a million dollars of their money on a capital of $50,000 and reap the dividends but pay no attention to those who depend on my integrity."