Before carbon paper had been invented or had gained widespread acceptance, business correspondence was duplicated by means of letter press books.

At the end of a business day, the office secretary would dampen the day's business correspondence, whether it was hand written or typewritten, and press it in a book of absorbent tissue paper. By the next morning the letter would be duplicated neatly in the letter press book. At this time the secretary would take the letter, perhaps still moist and a little wrinkled, Ind dispatch it to the person for whom it was intended.

Some parents got letters praising their children.

Through this method we have copies of copious correspondence issued by W.N. Ferris during the first 10 or 15 years of the college's history. 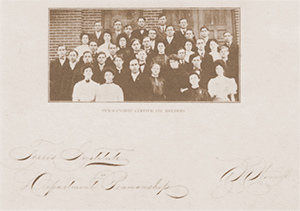 W.N. Ferris wrote copious amounts of correspondence, and thus placed high regard on penmanship, as this Penmanship Club picture from 1907 indicates.

W.N. Ferris wrote letters about many things. There were letters to prospective students, and letters dunning students for unpaid notes. Some parents got special letters advising them what good care would be taken of their children should they attend Ferris Industrial School. Some parents got letters praising their children. More than likely, however, a parent or guardian would get a letter noting that a pupil had been expelled for not working hard enough.

Many of the letters were in answer to requests from former pupils or friends asking advice. There is even one in which Mr. Ferris is asked to diagram a sentence. He complied with the request.

Probably because he believed it was so, Ferris set himself up as an expert on almost any subject one could ask him about. In his letters, W.N. Ferris ran the gamut of emotions from extreme optimism to extreme pessimism. In one letter he said he had made the biggest mistake of his life opening a school in Big Rapids and that he would sell out for 50 cents on the dollar if he could find anyone fool enough to pay him that much.

In other letters he would indicate that he felt very few persons in the country had done so much for the education of young people as he had, and that he would stick by his project until his death. In one of his pessimistic letters, he said he was going to take a mysterious trip to five cities in the East, and when he returned he was going to reorganize his school. There was no break in his correspondence at this time, and he obviously didn't take the trip.

Some would get letters noting that a pupil had been expelled for not working hard enough.

He wrote that he planned to open a manual training department in his school, but the public wouldn't buy it. He said that the public wasn't ready yet for vocational education.

Early letters to prospective faculty members followed a set pattern. Mr. Ferris would say that he couldn't afford to pay the teacher what he was worth -- indicating that he himself didn't make as much money out of his school as his teachers did. Then Ferris would induce the prospect to come to the school for a summer session as a teacher. This gave Ferris a chance to see if he liked the teacher, and whether the teacher could work with Ferris. The system seemed practical. Both Charles Carlisle and Gerrit Masselink accepted offers at Ferris under these conditions. Carlisle stayed more than 40 years, and Masselink became the second president.

In one letter he wrote that his school, in one sense, was losing something: "I come less and less in personal contact with my students. I can see that I have more disappointments in their training as a result."

"I come less and less in personal contact with my students. I can see that I have more disappointments in their training as a result."

To a Detroit-based educational periodical to which he owed some money he wrote:

"I shall probably permit my advertisement to go into the February number, possibly may continue it longer, but I am doing what thousands of others are doing, curtailing expenses whenever it is possible, and not making much of a success after all. The school has a daily attendance of 460, but many of the payments are in the form of promissory notes, and therefore of no avail in paying ordinary debts. I am enclosing exchange for $8 in payment of January issue, also a few items of news." 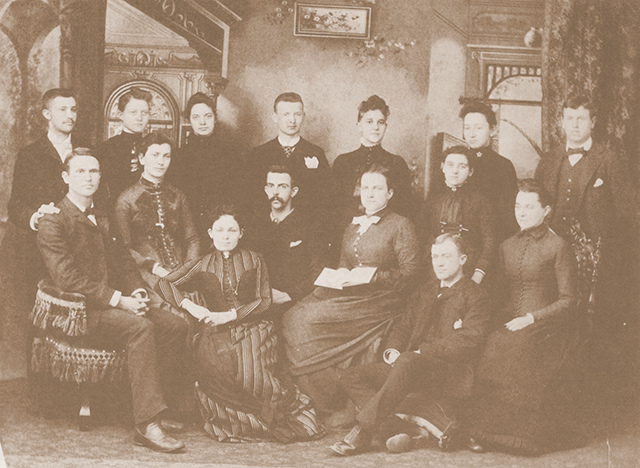 The well-dressed persons in 1888 would have looked much like these people, even to the crew cuts on several of the men. Shoes of this period were still primarily high tops, but Mr. Ferris (seated at left) predated a coming trend by shoe manufacturers who saved leather by cutting off the tops.

A placement letter which W.N. Ferris wrote in 1894 would probably produce lots of chuckles today. He wrote: "If you will call at my school, you will get a good stenographer. I will have you go into a private room, and test the young lady in every way you wish."

In 1894 he wrote to the Remington Arms Co. in New York saying he was contemplating buying a bicycle for use in and about the city of Big Rapids. He explained that he had a successful school in Big Rapids, which included a $25,000 building. He also reported that he published a quarterly newspaper with about 10,000 copies of each issue.

"I am doing what others are doing, curtailing expenses."

"Sometimes I use a little space for advertising," he said. "I thought that possibly you might give me your best rates and allow me to do some advertising in part payment. I should be glad to have the agency." Later, Carleton Ferris did have a bicycle agency in town.

W.N. Ferris did not get the Remington bicycle, and he wrote to another bicycle company in Minneapolis: "Could not your company afford to let me advertise your machine exclusively. I publish 10,000 copies four times a year. The placing of a machine here would be an advertisement in itself. Please do not think I am preying upon your generosity. If I were not encumbered with debt for my building, and if I were not pressed on every side I would not try to cut the expense down to the lowest notch." 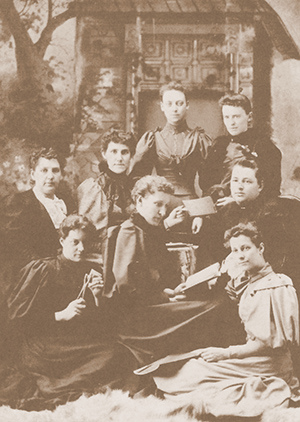 By 1895 styles had changed even more at the industrial. Material had gone out of skirts and into the sleeves of women's dresses.

To the general passenger agent of a Grand Rapids railroad, Ferris wrote:

"You know something of the success of the Ferris Industrial School. Because this school's enrollment is numbered by hundreds and might, if I would travel more, be greatly increased, I ask if it is at all consistent with your regulations to grant to myself and my family an annual pass. I am sure this would be mutually beneficial. I do not apply to you from the standpoint of sympathy but from the standpoint of business. I publish a quarterly called Useful Education four times a year, 10,000 copies circulation for each edition. Now, then, if you issue the pass I will willingly insert anything you ask me in the form of advertising for your railroad."

He didn't get the pass, but he did get permission to ride on the freight trains with the engineer and conductor so that he could make better connections when he had to change trains in the night and early morning hours.

It pained W.N. Ferris to have to write dunning letters, but during the depression of the 1890's, he was forced to write many.

In one he said, "You say that you have earned enough money to pay the one note, and that you can send it when the Board of Supervisors meet. I am very glad to learn this. Times are hard and numerous young people want help. If those who owe me can be extra prompt, then I can help others. To my own disadvantage, I have been obliged to refuse further loans to anyone. I have embarrassed myself seriously this summer."

To one student Ferris wrote, "The outside world looks on and sees a magnificient building put up. They infer at once that the man has a gold mine hidden away somewhere in the river bank. I rarely boast of any accomplishment, but I will venture to say that no man outside of a capitalist in Big Rapids would have gotten along with the difficulties better than I did."