They were suspenseful. No one ever knew what to expect. Sometimes they were embarrassing. They were always inspirational.

Of every school day for nearly half a century, 30 minutes were devoted to morning exercises. They were not a type of calisthenics, but congregational singing, readings and other types of entertainment.

At the morning exercises Mr. Ferris sometimes scathed the students publicly for major and minor infractions of his "rules." 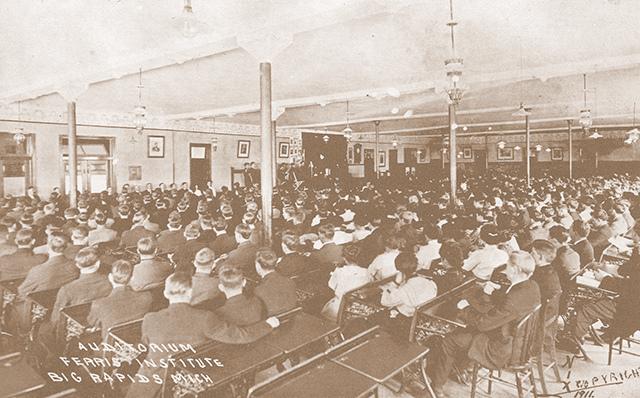 This auditorium, called the "Main Room," was the scene of morning exercises, the first activity of every school day for students who attended Ferris Industrial School (later Ferris Institute) between 1894 and the mid 1930's.

Sometimes when Mr. Ferris publicly expelled a student, Gerrit Masselink, Mr. Ferris' assistant, would meet the student at the assembly room door, counsel him or her, and give him or her a second chance.

There is no way of knowing whether that was strategy planned between them or whether Mr. Ferris ever did catch on to what was happening. One thing is known: the funds for the school came solely from tuition. If a student was expelled, the school was expected to refund that student's unused tuition. Sometimes there wasn't enough money in the treasury for the refund. Thus it was often expeditious to let recalcitrant students remain in school.

Generally, however, the morning exercises consisted of 10 minutes of group singing and 20 minutes for readings or short talks by the president.

Unless a student was enrolled in the rapid calculation class which met at 7:30 a.m., the morning exercises were the first thing on the student's daily program.

(Mr. Ferris insisted that the students take rapid calculation before breakfast so that their minds would be exceptionally clear.)

In his youth Mr. Ferris was much influenced by reading of the lives and thoughts of great men, and in his morning exercises he presented the lives and thoughts of great thinkers to his students. "Every possible effort," he said in his autobiography, "is put forth to awaken the students to a realization of their possibilities. These (morning exercises) talks are on the great themes of life -- sometimes on various phases of conduct as revealed in the daily lives of students."

They were probably one of the most singular educational devices ever attempted.

In 1922 when he wrote his autobiography he reported, "Thousands who have gone out from this great school testify to the worth of the morning exercises . . . Awaken the students to the realization of what it means to live and they will have little difficulty in performances. These morning exercises are a happy introduction to a day's work . . . ."

What better way could begin the story of a man and his school -- a man who was an outstanding educator and a successful politician? An anonymous tribute to W.N. Ferris which appeared in one of the early catalogs best describes him: 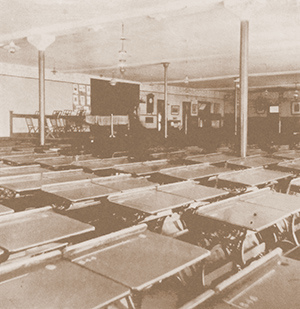 Even Though this empty assembly room is not longer in existence, there are still memories of the events held there for may people.

". . . The one that stands above all others, is the President, W.N. Ferris, a man whose personality attracts and holds, whose untiring energy wrings success from defeat and whose boundless enthusiasm permeates the very walls of the institution that stands as a monument to his labors. This man, now in some respects a national figure, is blessed above many teachers in that he has the power to win the esteem, the confidence, the love of young people. No small part of his success, however, has been due to his wife, who has given to her husband magnificent encouragement and help. Long may the President and his noble wife, through the Ferris Institute, continue to make the world better."

In fact one of his early catalogs said bluntly, "The purpose of the Ferris Industrial School is to make the world better."

This is the story of a man who had a dream, and of the school he developed by the trial and error method which in its first 100 years went from a private school to a state institution. 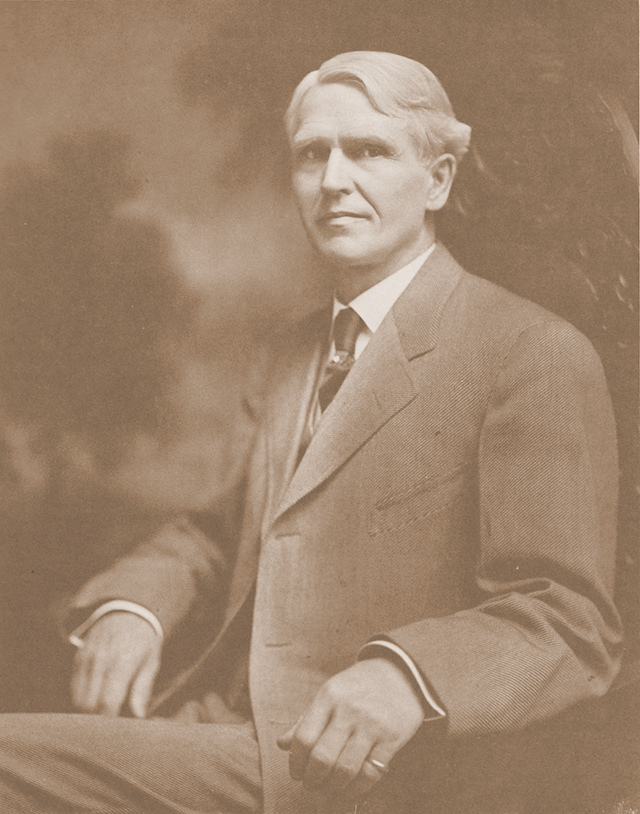 By any standard, Woodbridge Nathan Ferris was a success. He was born in a log cabin near Spencer in Tioga County, New York, on Jan. 6, 1853, and died in a luxury hotel in Washington, D.C., as a United States senator on March 23, 1928.

He became a public school teacher at age 16. He later founded several business colleges, and in Big Rapids, Michigan, he founded what was to become Ferris State College.

His father and grandfather were illiterate, but his mother had a good common school education. Were it not for that; W.N. Ferris might have been illiterate, too.

He probably decided to become a teacher because his own public schooling was a disaster. In school he said he was not motivated to learn.

During his public schooling he made many decisions to help others to learn, to develop a different type of educational system which would teach students a marketable skill in the shortest possible time, enhancing this skill with education in English, science and mathematics.

In one of his letters to a friend he said, "If I only had the ability that I desire, that I earnestly struggle for, I would make the Industrial School second only to the University of Michigan."

They Were suspenseful. No one ever knew what to expect.

But his school took another direction. It became the foundation for trade-technical education beyond the secondary level in the United States.

His school endeared him to the thousands of students who came there for quick instruction in how to make a living plus an additional dimension -- knowledge of life itself through such devices as the morning exercises.

His school made him famous enough to get him twice elected governor of Michigan as a Democrat in a traditionally Republican state and as a United States senator, also as a Democrat, in a Republican environment.

His School Became the foundation for trade-technical education beyond the secondary level in the United States.

His school became a state institution internationally known for its career programs. He probably would not have liked it to become a state school, but that path was later necessary for the school's survival.

This is the story of the first 100 years of this remarkable institution.