With the new building came the first catalog. The title page read: "First Catalog of the Ferris Industrial School, Big Rapids, Mich. Organized, 1884 -- Incorporated, 1894." The catalog was printed by Gay and Barrows, the job shop of the Pioneer.

The first catalog was 46 pages long. The last seven pages listed the names of the students enrolled for the year beginning September, 1893, and ending August, 1894.

In the catalog was the statement, "The total enrollment for the year just closing has been nearly 1,000." In his letter to the Mt. Pleasant Development Co. just two years before, Ferris had said that he did not want to head a school as large as 800 or 1,000. But W.N. Ferris rarely turned down an opportunity to make a dollar, and the total revenue from his school was from tuition. Thus, W.N. Ferris altered some of his preferences to suit his priorities.

The new catalog stated, "This growth is not remarkable from the standpoint of numbers. Considering the obstacles presented at the beginning of our career in this city, this growth is regarded with feelings of more than ordinary pride . . . If there is any secret underlying this growth, it is the constant effort of the school to encourage worthy effort in every student, regardless of his previous condition or previous opportunities . . . ."

Then came this statement, emphasized by bold face type because it encapsulates the philosophy which still prevails:

"In brief, this school has attempted to come into actual contact with the needs of the people; not in the sense of teaching them the art of getting rich in this world's goods, but rather in the sense of enabling them to make the most of themselves."

W.N. Ferris rarely turned down an opportunity to make a dollar.

"It is therefore not strange" the catalog continues, "that hundreds of young men and young women, many of them 25 to 35 years of age, have entered the Ferris Industrial School; sometimes for only six weeks, oftener for three months, and frequently for one year, in order to be assisted in developing their powers of usefulness. It is this feature of the school today that lies nearest the heart of the principal. He feels that those who had superior advantages in early life, those who have already occupied good positions, are best able to help themselves; in other words, they need the assistance of this country least. The Industrial will, therefore, continue to appeal to all young men and women, regardless of their ages, regardless of their mental attainments, regardless of their present positions, who desire to make themselves stronger and better."

The Industrial's faculty had grown by 1893 to nine, including Mr. and Mrs. Ferris. Among the teachers in this photo are the Ferrises (seated in center), Charles Carlisle (front row), and W.D. Henderson (top, second from left). Each faculty member had dormitories named after him in later years.

"The Ferris Institute is thoroughly democratic. It is a school for all people regardless of race or station."

In 1906 Ferris ran an advertisement which said, "The Ferris Institute is thoroughly democratic -- that is to say, it is a school for all the people regardless of race or station."

The new catalog also claimed: "The reader who examines this catalog hoping to find a large number of courses of study outlined will be greatly disappointed. For 10 years we have made our work largely elective. In no sense can the Ferris Industrial School be called a college. It is true that we have the privilege of making it a college. The aim of this institution has been and is to reach the masses, to reach men and women who have enjoyed comparatively few educational advantages. On this account it has never required an examination for general admission. We have accepted students from every walk of life . . . As the school grows older, the number of courses will doubtless increase. Our essential aim, however, will remain the same . . . We are determined to make admission to this institution easy; we are determined to command the attention of backward men and women; we are determined to adapt our institution to their needs. Therefore, if any reader lays down this catalog disappointed in not finding some special course outlines, let him address a letter of inquiry to the Principal.

"In no sense can the Ferris Industrial School be called a college. It is true we have the privilege of making it a college. 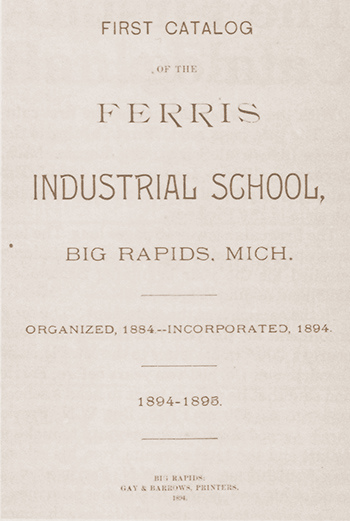 The title page of the first catalog at Ferris.

Mr. Ferris claimed that every employee should appreciate the value of English and preached that intelligent employers would take employees to task for poor spelling, bad capitalization, and bungling construction. "The bookkeeper is least likely to show his/her English deficiencies," he said.

Students who took the business program worked in actual simulated business situations involving daily business transactions including the handling of every form of business papers.

Another program to which students in all areas had comprehensive exposure was penmanship. Mr. Ferris was an exceptional penman. Given time he wrote beautifully shaped letters. In long letters to his family he would discontinue shading the letters about halfway through the letter. In the early days of the school whenever he dictated letters to be typewritten, he apologized to the reader for whom the letter was intended for not having written it in longhand.

"This institution prepares men and women for the everyday duties of life."

The art program offered a new dimension for the teacher candidate and probably gave the Ferris graduate a helpful credential. The catalog stated: "Every teacher should be more or less familiar with drawing. Every teacher should be able to do simple modeling. All schools of lower grade would be made more interesting if the teacher were able to sketch rapidly with a bit of crayon or pencil, if the teacher were able to model in clay some of the simplest forms that are found in nature." 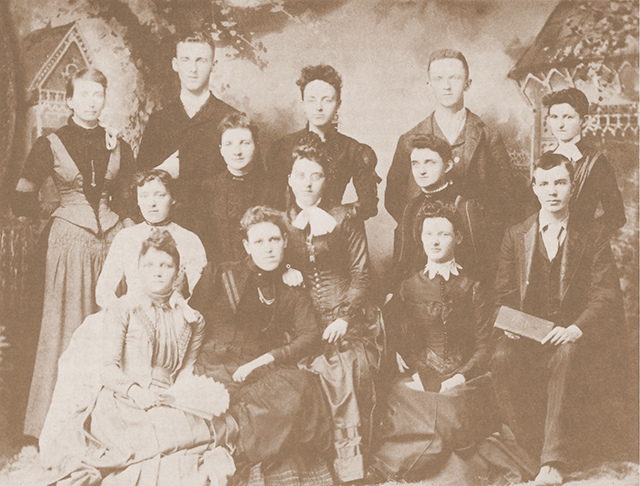 This group of students from 1890 posed in front of a popular background. Their last names are given, but not matched to the faces. They Are: Miss Gibers, Miss Jackson, Miss Myers, Mr. Bradly, Miss Bevins, Miss Win, Mr.Byam, Miss Glerium, Miss Filley, Miss Alexander, and Mr. VanAntwerp.

The kindergarten teacher was expected to give the pre-school training that one would expect to find in a cultured home. Mr. Ferris felt that the homes no longer offered such culture, nor did the primary schools.

Kindergarten continued as a strong program at Ferris until after the U.S. involvement in World War I. Since kindergarten was a German word, W.N. Ferris publicly announced he was discontinuing the teaching of kindergarten and German. Mary McNerney, who taught German, was reassigned to other languages. Even though W.N. Ferris said he wasn't teaching kindergarten any longer he did not delete the word from the catalog for a few more years.

The pharmacy program, which was initiated about the same time as the first catalog, became a money-maker for the school, and Mr. Ferris soon realized the economic importance of this program.

At first the pharmacy program offered only the first year of training. The student was expected to attend the University of Michigan for the second year. The first catalog said: "While special preparation in pharmacy is being carried on, careful attention will be given to English, mathematics, Latin, physics, and botany." For many years pharmacists had to have a knowledge of Latin because prescriptions were written from Latin pharmaceutical names. Persons who became registered pharmacists by way of apprenticeship programs often had the help of the local high school Latin teacher for preparation in reading the names.

The kindergarten teacher was expected to give the pre-school training that one would find in a cultured home.

By the time W.N. Ferris issued the 1898-99 catalog, he had changed the description of the civil service preparation. The catalog advised young men and women of ordinary ability and excellent character that they could prepare in a comparatively short time for positions that would pay a salary of from $750 to $1,500 annually. In this time slot the students were requested to write the Civil Service Department in Washington, D.C., to find out what the requirements were for civil service positions.