The year 1896 was a calamitous one for W.N. Ferris and the Industrial. The calamities included the closing of the Northern Bank, the national depression that came with the free silver trouble, and a tornado which hit Big Rapids, Sunday, August 9. The wind, however, was not so ill that it didn't blow W.N. Ferris some good.

The storm came up about the time the first bell was ringing for church that Sunday morning. Even though cyclones (they were not called tornadoes then) were common, the Big Rapids storm was much more severe than the residents were accustomed to seeing. It lasted about 35 minutes and although a good deal of it was wind, nearly an inch of rain fell. There was plenty of thunder and lightning, but comparatively little damage was done by lightning.

A few trees were blown over in different parts of the city. Limbs from shade and fruit trees were scattered about promiscuously. The elevated sidewalk crossing Mitchell Creek was tipped over; bulletin boards were blown down; and a few telegraph, telephone and electric light poles were interfered with.

Damage was greatest at the Industrial School where two chimneys were blown down, crashing through the roof and ceiling of the commercial department damaging the building, windows, tables and other furniture to the extent of nearly $1,000.

The wind was not so ill that it didn't blow W.N. Ferris some good.

The water aided materially in bringing about the damage at the Ferris building, and notwithstanding the promptness with which the work of repairing the damage was commenced, the next morning's wind and rain increased the damage.

Sunday mornings were probably the only time in the week that there wouldn't have been any students in the school, and in that respect the storm came at a fortunate time; otherwise as many as 50 lives might have been lost. There was a janitor in the building at the time the storm struck, but he escaped unharmed.

The good the storm did came in the support given to the Industrial School by the Big Rapids Pioneer. Charlie Gay, the editor, wrote a sympathetic editorial offering to start a collection, giving $5 seed money, to help Mr. Ferris restore the building. Ferris wrote a letter to the editor thanking him for his offer and thanking the citizens for their help in repairing the storm damage.

Sunday morning was probably the only time in the week that there wouldn't have been any students in the school.

W.N. Ferris still dreamed of a plan where the citizens of Big Rapids would contribute $5,000 per year to the Industrial School in the form of a building fund to give him adequate space for his school. Thinking that now the citizenry was ripe for such a plan, Ferris wrote a letter to the editor of the Pioneer, which Charlie Gay published. It read: 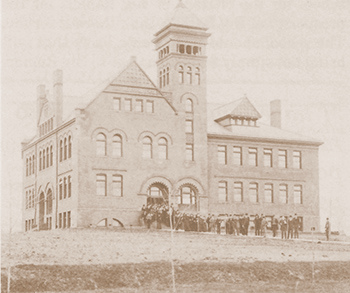 "Old Main" in 1896, before the two chimneys were knocked down by winds.

"During the past 12 years the Ferris Industrial School has brought over half a million dollars to this city."

"During the past 12 years the Ferris Industrial School has brought over half a million dollars to this city. During the school year that is now drawing to a close the school has brought $65,000 here. It has enrolled 1,128 pupils. More than 60 families have gained a livelihood by keeping boarders and roomers. The 60 families have bought their products from the various business houses of the city. Who can name an institution of this city that has contributed more to the prosperity of this city than this institution? I challenge comparison. A large number of the citizens have been laboring under a serious misapprehension. The Ferris Industrial School, unlike other property in Big Rapids, is worthless when the school ceases. It has never been my aim to make money. I have simply longed and hoped to make the institution a great power in helping young people. There is far more in this school for the citizens of Big Rapids, for the prosperity of Big Rapids, than there is for me. The school should be put on a basis that will bring not simply $65,000 a year to Big Rapids, but $100,000. It cannot be done, however, by one man and a poor man at that. I do not wish gifts. I only wish men who believe in Big Rapids to consider in a businesslike way that the Ferris Industrial School is a business enterprise, an enterprise related to the prosperity of the city."

"I have longed and hoped to make the institution a great power in helping young people."