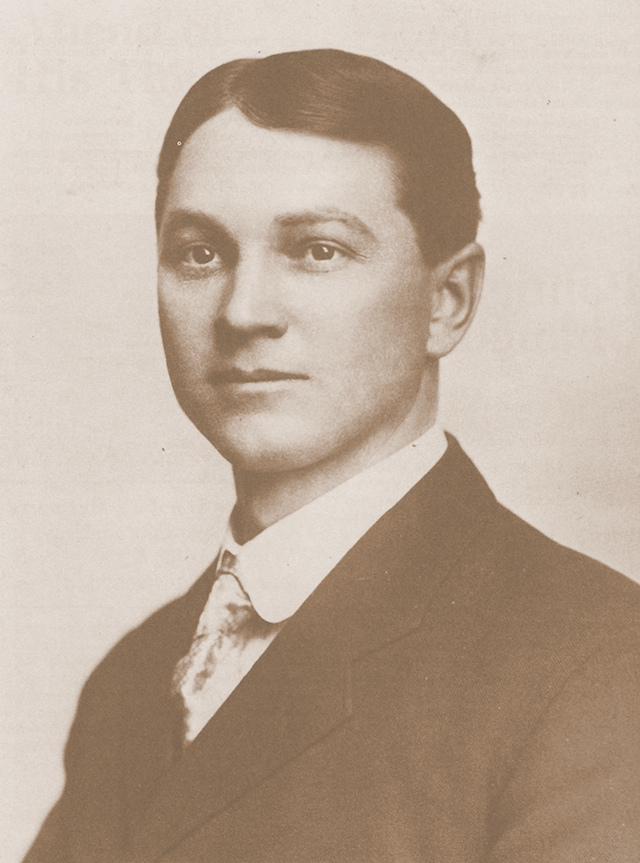 His building built and his catalog out, W.N. Ferris began a search for more teachers. In 1896 he hired Gerrit Masselink (photo left) and H.H. Barrows. Masselink was hired as the second in command and to teach mathematics, and Barrows was to teach drawing.

"Cottages range from $5 to $10 a month according to location."

Ferris began his search for both men in much the same way. He wrote to their teachers at the colleges they attended, and then he wrote to the men telling them that they had good recommendations. He offered them jobs during the summer session to see if they were acceptable to him and if he was acceptable to them. If they were mutually agreeable, then Ferris would offer them a contract for the school year at the most reasonable salary he could pay.

W.N. Ferris thought Barrows was too young for the position, but he possibly remembered he began his own career as a teacher at age 16, and he realized that he could get a younger teacher for less money than an experienced one would demand. As a matter of fact, he

told Barrows that if he hired him he would be the youngest candidate he had ever had in full charge of a department, but he said, "I was young once and know what it is to struggle against this objection."

Before he made his final offer to Barrows, W.N. Ferris communicated with him about the nature of the school, the nature of the man, and what he expected in a teacher. Then he offered him a salary of $45 for six weeks of half-day teaching of history, geography and blackboard drawing.

After W.N. Ferris had checked Masselink's recommendations, he wrote to him to say that in case Mrs. Ferris decided to retire from the school, Masselink would be the man tendered the position. But he urged him not to forego any good opportunity.

W.N. offered Masselink the job on the condition that his summer session was satisfactory. Then he said he would give Masselink $70 a month or $840 for the full 12 months. In the second year he raised Masselink's salary to $80 a month. Masselink really didn't make twice as much as Barrows; he was to work a full day instead of half a day.

In his letter hiring Masselink, Ferris said: "Bear in mind a month's service at the Industrial School consists of 20 days of actual teaching. Consequently if a teacher is ill, or there is no school on a holiday, he loses that time."

In his very chatty letter to Masselink offering him the position, W.N. Ferris pointed out that he was two weeks late with his catalog because of delays at a local printing office. Ferris advised Masselink not to sell his household goods when he came to his post at the Industrial but to ship them to Big Rapids. He also advised Masselink that he would locate a rental house for him. "Cottages range from five to 10 dollars per month according to location," he wrote.

Ferris also asked Masselink to bring as many teachers from his schools (Cass City) as he could possibly bring to the summer sessions. But Ferris did not press Masselink. "Do the best you can," he said.

Masselink was a success. He and Ferris complemented each other. Ferris didn't like athletics, but when Masselink saw an impromptu football game in progress he would jump in and coach it. Alumni report that when Ferris expelled a student for some infraction of a rule, Masselink would realize that was lost tuition and "sneak the student back in through the back door so to speak."