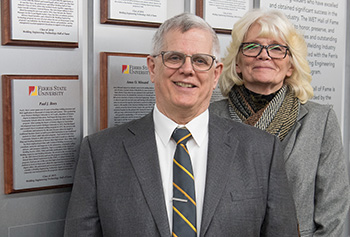 Paul J. Boes’ career spans over 45 years of teaching welding processes and their application to thousands of young men and women. After graduating from Western Michigan University in 1972 with a Bachelor of Science degree in Industrial Education, Paul began his long career at Utica Community Schools where he started as a teacher for their metal shop program. After earning his Master of Science degree in Curriculum Development from Eastern Michigan University in 1975, Paul developed and created Utica’s vocational welding program in 1975. He served as the coordinator and instructor for the next 30 years where he taught in traditional daytime classes as well as providing instruction to non-traditional students in Utica’s adult education program.

Paul retired from Utica Community Schools in 2005 and soon went back to work as a Machine Shop and Drafting Instructor at Warren Mott High School. Since 2006, Paul has been employed part-time with Technical Welding Services as a consultant, instructor and inspector in the automotive, community college, defense, and aerospace industries. Paul is a member of the American Welding Society (AWS, 1984) and holds certifications from AWS as a Welding Inspector and Welding Educator. He served on the executive board for the AWS Detroit Section and was the program coordinator for the Detroit Sheet Metal Conferences in the 1990s. A valued friend to the program, Paul was one of the very first high school instructors to bring students to Ferris to learn more about the opportunities a Ferris welding degree offers. His advisement and encouragement to his students to consider a Welding Engineering Technology degree at Ferris State University was instrumental in the programs’ demand and success. 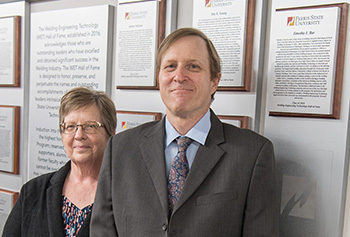 Timothy E. Bur has had a long career in welding education that began at Ferris State University where he earned his Associate in Applied Science degree in Welding Technology in 1982. After graduation, Tim returned to his family farm in his hometown of Cheboygan, Michigan, to run its daily operations. Several years passed before Tim accepted a position in 1988 as a paraprofessional at Cheboygan Area High School where he assisted students with learning disabilities in their welding program. Tim continued in this position for the next 11 years before returning to Ferris where he earned his Bachelor of Science degree in Technical Education in 1999.

Tim went on to become a full-time instructor at Cheboygan Area High School where he taught General Metals for grades nine and 10 and Welding Technology to 11th and 12th grade students until his retirement in 2017. In addition to his full-time positions, Tim taught adult welding education through the Cheboygan Adult Learning Center and then Alpena Community College at Moran Iron Works in Onaway, Michigan.

Tim is now a part-time instructor at the Industrial Arts Institute and provides training to students seeking a career in the welding trades. Tim is a founding member of the Northern Michigan Welding Educators Association, a member of the American Welding Society (AWS, 1988), and holds a Michigan Occupational Education certificate and an AWS structural welding certification. Tim has been a dedicated alumnus to the Welding Engineering Technology program and was one of the very first high school instructors to bring students to the program. His advisement and encouragement to his students to consider a Welding Engineering Technology degree at Ferris State University was instrumental in the programs’ demand and success.

School of Design and Manufacturing