A History of Change 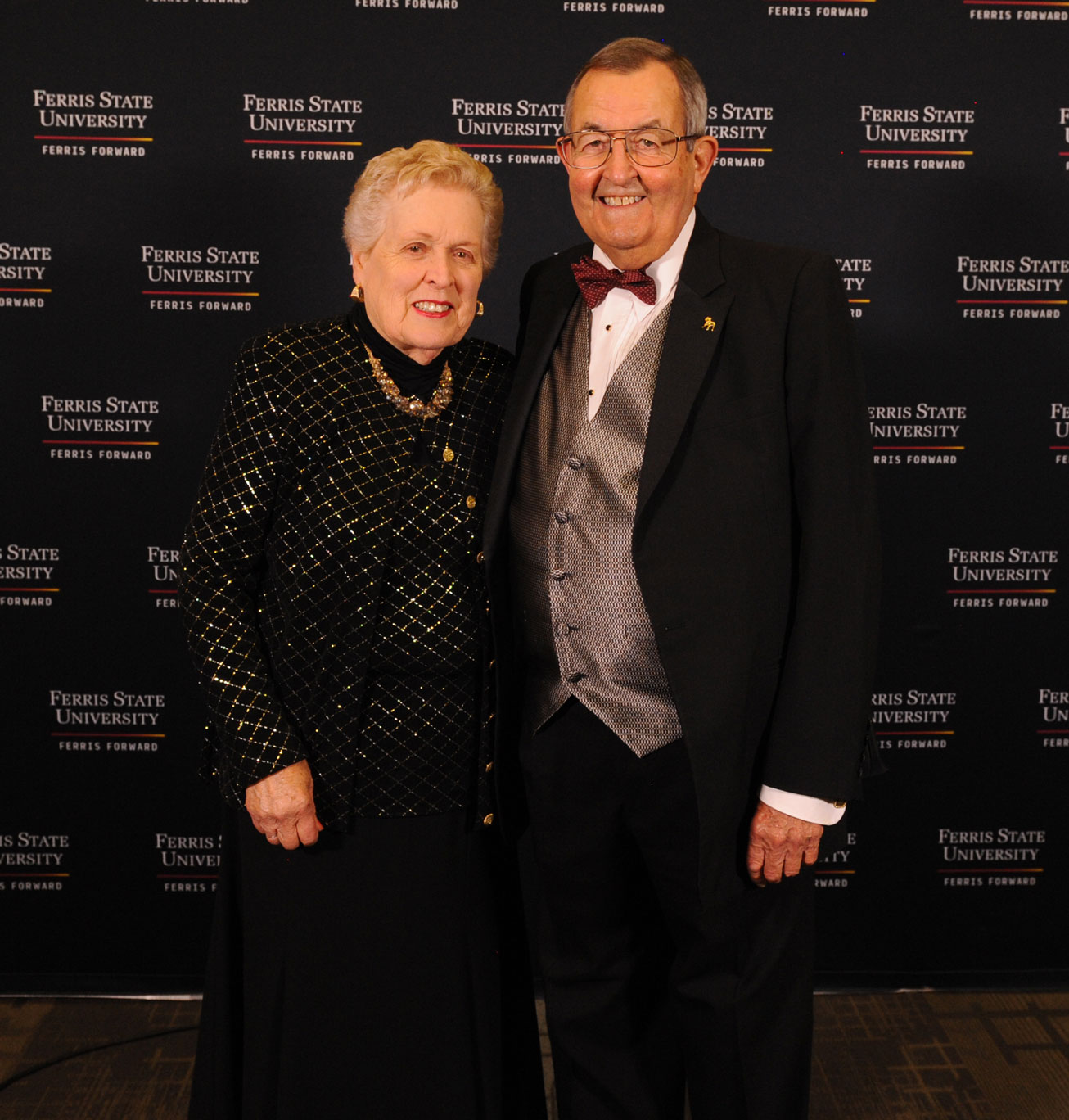 Thomas P. Scholler (`59) has had Ferris State University in his sights since he was a young boy. Born in 1937 in Big Rapids, MI, the home in which he grew up gave him a premium view of the entire campus. “We lived right around the corner from Ferris. I could look out the kitchen window at ‘Old Main,’ and the Pharmacy and  Alumni buildings.”

Scholler witnessed the historic fire that destroyed Old Main as well as the original Pharmacy building, on February 21, 1950.“A lot of the fire department were just volunteers, Big Rapids people, many of whom went to Ferris. My mother served them coffee in our kitchen,” Scholler recalls, “It was in February, and the fire hydrant in front of the school was frozen. They had to pump water from the Muskegon River.”

Scholler did not attend public high school, but instead attended seminary school in Grand Rapids with plans of becoming a priest. During this time, he also participated in many sports, like touch football, basketball, baseball, and track.

Following his time at the seminary, Scholler wanted to get accustomed to the world again and decided to attend Ferris for year. Scholler’s mother and an aunt had both attended Ferris, and with the college right across the street from his house it was the perfect choice.

Scholler planned to attend Ferris for a year, and then transfer to a bigger university to get a degree in history and then attend law school.  Those plans soon changed once he was enrolled at Ferris.

Big Rapids, an Accounting major who had been accepted to law school. Parsons suggested that he consider majoring in Accounting at Ferris. “He said ‘Well, if you're interested in law school, corporate law is a good profession, a good aspect of the law,’” Scholler said. “And Accounting can give you a great background for corporate law.”

Scholler knew that Ferris had a strong Accounting program, so he decided to change his plans. He graduated from Ferris in 1959 with a degree in Accounting, before attending the University of Michigan Law School. He credits his accounting degree at Ferris with helping him succeed at Michigan.

Looking back, Scholler recognizes Ferris as an opportunity school. He took advantage of this opportunity and used the tools given to him as a great foundation for starting his career.

Ferris not only helped Scholler gain a degree. While there, he met his future wife, Marcia.

“Student government had organized a group to help incoming students with their luggage,” he recalled. “I mostly coordinated the group, so didn’t haul much luggage that day. One family that I did help was Marica’s, although I talked mostly with her stepfather. He was the only one to tip me that day.”

“But when Marcia came to the student government open house a few days later, she did recognize me. It really started with student government,” he shares. “I was a junior at that time when she was a freshman.  “She strolled by and was interested in student government, and I got her an assignment. So, we had opportunity to associate together.” Scholler’s wife Marcia adds, “I came to Ferris because it was an opportunity school. My stepfather decided I needed a college education, but I had no background. Ferris, being an opportunity school, really was the fit. Even today, it helps people who may not be prepared for college to get a degree.”

Looking back, Scholler and his wife are most proud of being involved with their community, whether it is with their church, their children’s schools, Cub Scouts and Girl Scouts, or even Ferris. The willingness to be involved is what they are most proud of. “I think I like to think that we have contributed to the community.”

Scholler has a long history of being involved with Ferris State University. He started as a neighbor, together he and Marcia were students and now active alumni, followed by his having a hand in its leadership.

“Governor [William] Milliken appointed me to the Ferris State College Board of Control in 1978. And that was when President [Robert] Ewigleben was president. We started a rotating program so that you were chairman of the board for a year. In the neighborhood of 1981 or 82, I was chairman of the board. Students that graduated at that time have my signatures on their diploma,” Scholler chuckles, “I don't know if they're proud about that or not”

During his term on the board, Ferris saw the first Optometry graduating class and the inauguration of the PGA  Golf Management and Division 1 hockey programs.

When asked about serving currently on the board of The Ferris Foundation , Scholler shared many of the highlights of service.

“One of the things I enjoy a lot is keeping abreast of what's going on at Ferris,” Scholler explains, “Another one of the duties of the foundation is looking after the endowment, which has grown quite a bit. That's very satisfying.”

“We also have a fundraising dinner in the fall. Out of that comes additional scholarship funding, and also grants for faculty for research and those kinds of things. We always hear about the great things that are going on with the campus and faculty that are really cutting edge of a lot of things.”

Looking back at all of the accomplishments he was able to achieve during his time at Ferris, Scholler has one regret.

“I can't say it was a big disappointment, but I guess I wish I had had better athletic skills. I would have liked to have been better at football when I was on the team.  I only ran track one year. I did win a letter in track as part of a mile relay team. I probably should have continued that.”

Because of their relationship with Ferris State University, the Schollers are blessed to have established the Thomas and Marcia Scholler Endowed Scholarship.  This scholarship is awarded to a full-time student who has demonstrated a financial need. The Schollers realize that many Ferris students are the first in their family to attend college, like Marcia, and hope their scholarships will ease some of the financial burdens for those students and their families.