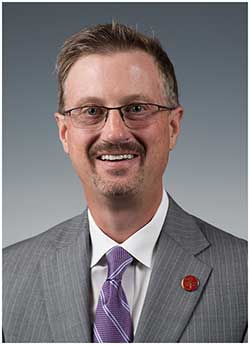 A leader during his time as a student at Ferris State University, Kevin Cross, has continued to have an impact on students at the university as an alumnus and member of The Ferris Foundation’s Board of Directors. Graduating from the College of Business in 1986 with a Bachelor of Science degree in Insurance and Business Administration, Cross was licensed by the state of Michigan at the age of 19.  He served as an active member of Gamma Iota Sigma, a professional fraternity supporting the insurance, risk management and actuarial science professions, for three years then president for two. During Cross’ time with the fraternity, the chapter was awarded the Bowers Award, recognizing them as the organization's best chapter for helping community members and partnering with insurance companies. A year later, he graduated and became the first commercial underwriter in Citizen Insurance’s history to begin work directly out of college.

Cross always credited Ferris with connecting him to leaders in the insurance industry while being a student. “We were able to actually get out to meet the people in the industry before we graduated. Which I still work with. I always felt I was able to move up in the industry because of that and always wanted to give back to the school that did that,” Cross said.

Remaining connected to Ferris through his volunteer service on several boards, Cross eventually served as president of the Ferris State University Alumni Association from 2002 to 2004. Here, Cross feels that he had the most impact. Prior to his joining, the board was comprised of mostly local Ferris graduates. Other members had started to transition the board to include alumnus from across the country. With Cross’ help, the board was able to adjust some of the commitments and duties to better accommodate a more diverse group of members.

“We had to travel and convince them to be on the board and transition what the board did at the meetings to be effective and beneficial of their time,” Cross said. He also worked with staff to identify alumnus who have had great success in places such as Texas, California, and Colorado

As his time on the Alumni Association board came to an end, Cross was invited by University President David Eisler to serve on the board for The Ferris Foundation. This was a natural transition as the two groups often worked together on events and initiatives for the University.

To this day, his favorite aspect of being on The Foundation board has been being able to meet the students who have been the recipients of scholarships that the foundation raises funds for.

“Ferris has meant a great deal to me. I’m just honored to have been able to give back.”