Joy Trute: The Beat Goes On

A lot of high school and college students watch anime cartoons or read manga comic books, but how many take that interest beyond the TV screen or the page? Joy Trute (B'08), for one. 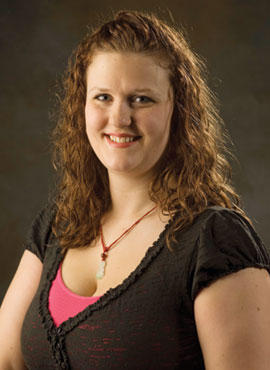 "It all really started in high school when I did the Rotary International Youth Exchange," says the Big Rapids native, who graduated with a degree in Music Industry Management from Ferris last December. "Rotary sent me to Taichung, Taiwan for a year. I experienced Asian culture and learned the language — Mandarin Chinese and a little bit of Taiwanese."

While Trute's attraction to anime and manga motivated her to travel, it was a 1998 television show that started Trute down a path that would take her to Ferris.

"I saw the Mad TV Halloween special where Kiss came on and did a little skit, which I thought I was hilarious. Then I got into the whole theatrics of the rock'n'roll industry," says Trute. "As I got older and realized I wasn't going to be the rock star with the giant tongue, I started looking into other stuff, like being a lighting technician, a tour manager, or something of that sort. That's when I found that Ferris, a school right in my hometown, had a Music Industry Management program."

This past January, Trute attended the annual trade show for the National Association of Music Merchants in Anaheim, Calif., thanks to a scholarship from NAMM. It was there that Trute got the opportunity to bring together her cultural experience, language skills and music industry knowledge.

"Walking around the floor I found a company, Dong Jou Percussion, which was from Taichung, so I sat down and started talking to them in Mandarin Chinese and they were just blown away! I gave them my card and told them I would be around the rest of the weekend. So the next day I got a call asking me to come in for an interview," recalls Trute.

Thanks to her rare combination of talents, this past summer Trute returned to Taichung on a paid internship with the company. There, she took on a wide-range of projects for the company — everything from re-writing their English-language product booklets to acting as interpreter for visiting percussionist Mike Terrana, as well as organizing the drum clinic he gave.

Since she returned from Taiwan in August, just three days before beginning classes, she has maintained a relationship with the company by working to line up distributors for the company's DJ Drums brand equipment. Also, the company donated two drum sets to the University thanks to Trute, who pitched the donation of the instruments to the company. And in a move that brought Trute full circle, Dong Jou paid for her to attend the 2009 NAMM conference to help represent them.

"There are so many things you can go into with the Music Industry Management degree. There are people going into entertainment law, artist representation, music licensing, venue representation and ownership, tour management — you can go anywhere with this," says Trute. "I'd really enjoy doing something international using my language skills. I just want to be in the music industry because it makes me happy."