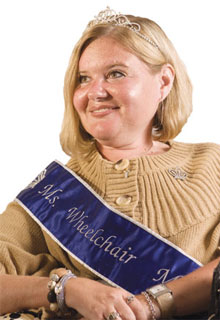 Life just hasn't been the same for Kathy LeMieux (B '96) since she received an e-mail from her sister-in-law urging her to enter a beauty pageant.

"I wrote her back immediately and said, 'Are you kidding me? I'm 37 and in no shape whatsoever to be entering a beauty pageant — there is no way I'm going to do that!'" laughs LeMieux. Intrigued, however, she looked into the pageant and realized it wasn't about looks at all. "It was entirely about accomplishments, achievements and advocacy, and that is what I am all about — not just for myself, but for others."

"If I don't do it now, I probably never will," she wrote her sister-in-law. "I'm going to try it!" Her sense of urgency stemmed from having a disease, which is not just progressive, but terminal.

She filled out an 18-page application and took part in a one-day competition in Grand Rapids at the end of which she was crowned Ms. Wheelchair Michigan 2008.

"I felt like I did well, but I was up against some pretty good competition. These women were absolutely accomplished, and were beautiful inside and outside," she says. "It was an honor just to be a part of a pageant."

LeMieux grew up like a normal child. She played with her five sisters, had chores and looked forward to what the future held for her, even though as an infant she was diagnosed with muscular dystrophy, a genetic disease that causes progressive muscle weakness. The disease runs in her family, although neither of her parents have it.

"Luckily, I was raised around strong-willed women. I didn't have the luxury of being anything less than outgoing and extroverted," confides LeMieux, who was recently promoted to director of development with the MOKA Foundation, which provides services for the families of children with autism and other disabilities in Allegan, Kent, Muskegon and Ottawa counties. She is thrilled to have the opportunity to utilize her Ferris Business Management degree as well as her experience from working in the corporate world to help a service organization.

"It's a very unique circumstance for me to be able to work with MOKA," LeMieux says. "I feel blessed all the way around. Not only do I get to work for an organization I fully believe in and support, but they allow me to do it on a part-time basis, because they understand that it's all my body can handle at this point."

Despite what she says about her level of endurance, between her work with MOKA and her duties as pageant winner, LeMieux has kept up a schedule of appearances that would challenge anyone in — or out — of a wheelchair.

Since earning her crown, LeMieux has touched many lives. She's read to more than 390 elementary school students, spoken to almost 400 human service/social work students and been presented with the State Seal at the Capitol in Lansing.

"When I got crowned, I signed my contract and was told that in two days I had to be in a parade and had to figure out a way to get there! I've been in a whirlwind; I never expected this to be a part of my life," she says.

Part of that whirlwind included traveling to Rockville, Md., last July to compete in the Ms. Wheelchair America pageant. The national pageant provides a forum for successful women who also happen to use a wheelchair to advocate on behalf of the more than 52 million Americans with disabilities. LeMieux finished the national competition as third runner-up.

"We need to take every opportunity to explain, educate, ask and advocate for what it is we need because we are all different," says LeMieux. "My needs are very different from my older sister who is also in a wheelchair with the same disease. Self-advocacy is going to be extremely important, especially when you're talking about inclusion. How can we expect to be included and have society welcome us without letting them know what we need? I want to teach people how to do that."

The pace of LeMieux's reign is ironic, since she's convinced that God put her in a wheelchair to slow her down.

"I'm such an adrenaline junky. My husband and I have jet skis, an 18-foot Sea Doo jet boat and I drive. I absolutely love the freedom. It's my ultimate independence. Not to be cliché, but I have the need for speed!"

For LeMieux, the only thing going too fast is the time she has remaining as Ms. Wheelchair Michigan. As with the rest of her life, she's savoring every minute of it.