Brookelyn Bellinger (EHS '97) is a renaissance woman in a Carhartt coat. She is the author of The Frozen Toe Guide to Real Alaskan Livin': Learn How to Survive Moose Attacks, Endless Winters & Life Without Indoor Plumbing. She is a singer-songwriter who has released a CD entitled Dance With Me, and been the opening act for Laura Love, Jeff Lang and Nanci Griffith. A self-taught filmmaker, she is in post-production on a documentary about the extreme Mount Marathon foot race in Seward.

She has also used an outhouse at 50 below zero. 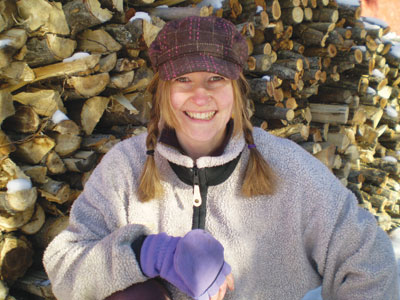 "Alaska is larger than life in many, many ways. There's a unique group of people who live here," says Bellinger, whose description clearly includes herself. She says that the state has "quirkiness beyond measure."

Bellinger "sort of wandered in the west for a while," before starting her degree in Recreation Leadership and Management with a concentration in Outdoor Adventure Education. While in Big Rapids, she was lead singer in a local band and met her future husband, David Whipple, at a coffee house where she was working and he was playing with his own band. After graduation, Bellinger took her first job "career-wise" as an outdoor educator in Wisconsin. "I did that for a year, but I really wanted to get back to the West, but especially Alaska. David came up here for that year I was in Wisconsin. Then we got married and both came up together. It's where I've always wanted to be."

She writes a column about Delta Junction, her hometown, for the Fairbanks Daily News-Miner. An entrepreneur, she sells "Arctic Lemonade" on Saturdays May through September at the Fairbanks Farmers Market. And this past year after getting the filmmaking bug, she shot two films — one a Bigfoot spoof that had its premiere at the local library.

"We had so much fun shooting that," says Bellinger. "We were out on the highway. Maybe two or three people went by and they didn't even stop. It's Alaska. It's not a big deal to see a Sasquatch by the side of the road."

In the first chapter of The Frozen Toe Guide, "Dreaming of Alaska, Go Your Own Way," Bellinger recalls her first trip to the 49th state.

I yearned for Alaska — a place where all kinds of oddballs fit in. A place where hunters, greenies, hippies, and conservatives alike all lived for the same reasons: that spirited Alaskan independence, wide-open spaces, the oil check, and a plethora of espresso stands. So with $200 to spare, I grabbed my backpack and bought a ticket to the Last Frontier. I arrived in Anchorage after a long flight, slept in the airport till dawn (3:00 a.m.), and caught a shuttle to Homer. It was raining when I got there and almost dark. When I asked about camping, the shuttle driver mentioned something about a bed and breakfast that had a bunkroom, and for $15 I could sleep there for the night — breakfast included. I had hit the cheap jackpot (never again to be experienced in Alaska).

Within a week and a half I had two jobs and was collecting my first paycheck. I worked out a deal with the owner of the B&B: I would help out with the cooking and cleaning, and in exchange she would let me live on the property in my tent. I also got a job at a fishing/tackle shop selling all but rockets and mortars for killing fish.

Life was good — fishing, work, and socializing took most of my time. Once in a while I'd lie on my back with my head sticking out the tent door and just stare at the sky, 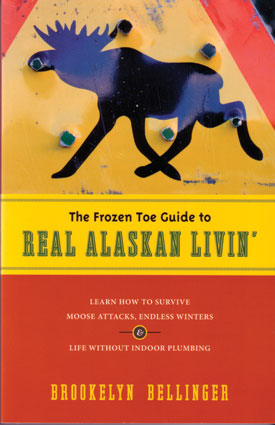 thinking just how lucky I was. One night, as I drifted with my thoughts, the ground began to shake, and in a sudden rush of commotion a large moose ran by, missing my face by an inch. I sat up quick — my scalp burning. When I caught my breath, I looked around and found a huge wad of hair lying on the grass in front of my tent. The moose had stepped on my perfect feathered hair and pulled out several large chunks. Imagine a haircut David Letterman might give after three drinks, and there's your visual. I had no choice but to revert to short hair. But not to worry — men in Alaska aren't that picky. All I had to say was, "Do you know any good fishing spots?" and I had myself a boyfriend — and a man with a shotgun for future "defense of life" situations.

Besides the B&B guest that got drunk and sang John Denver tunes all night and the unfortunate moose "event," my summer was absolutely perfect. You too can find this kind of satisfaction up here in Alaska. There are untold adventures waiting — and we'll welcome you no matter what your haircut.

In addition to tongue-in-cheek accounts of Alaskan adventures (both hers and others), The Frozen Toe Guide also has lots of information for anyone visiting the state. There are articles about driving the Denali Highway and backpacking the Chilkoot Trail. In the chapter "Extremely Alaskan: Sports on the Edge," you learn that your $700 entry fee for the 350-mile long ultra-marathon Iditarod Trail Invitational (not to be confused with the famous dog-sled race of the same name) gets you a T-shirt, two food drops and a poster, while the $50 entry fee to the Bering Sea Ice Golf Classic also gets you a T-shirt — plus two small bottles of liquor and a certificate.

Bellinger has tips for successful dumpster diving (her best finds include a fur coat and antique bed frame), music and theater guides, and a list of Alaskan radio stations you can hear online to make you feel better about winter in the Lower 48.