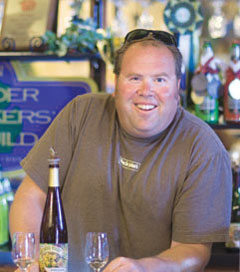 The farm has been in the Beck family for more than 120 years, although it hasn't always been famous for its apple orchards and cider.

Starting in 1972, the farm in St. Johns, Mich., made its name as a "pick your own" apple orchard, and also sold fruit and vegetables from off the front porch. But as successful entrepreneurs always do, the Beck family looked for ways to add more value to the business. They cleaned out the cattle barn, bought a cider press and started pressing their main crop – and Uncle John's hasn't been the same since.

Mike Beck (T'94) keeps alive the family tradition as a fifth generation co-owner. His parents, Carolyn and John (the business's namesake) still live on the farm and are very involved in its operation. John's mother, Ella Mae, is 98 and still lives in her own home on the farm.

Mike is proud to carry on the family tradition.

"After graduating with my degree in Facility Management and being a project manager with a construction company for several years, I experienced the down times of the industry and realized I needed a change. Working for the family business just felt right, and I've been with Uncle John's ever since."

During the fall season, when thousands of cider-loving families trek to Uncle John's to take tractor-drawn hay rides, wind their way through a corn maze or jump in the inflatables they will sell more than 2,500 gallons of cider and 3,000 donuts. Every day.

"In the slower time of the year I make and bottle our wine and spirits, or work out in the orchard with a specialist to discuss pruning plans, which is very important," says Beck, "A farm never really shuts down. It may look like it's sleeping, but it's always doing something."

He attributes the cider mill's success to hard work ... and diversification.

"We make donuts, baked goods, many different kinds of wine, we grow all sorts of fruits and vegetables, and we have Christmas trees in the winter." Plus, Beck says, "Bar none we have the best apple cider in Michigan."

In May when Uncle John's opens they might only have a dozen workers on the payroll, but during the busy fall season they will have as many as 130. "The seasonality of our business is definitely a challenge," says Beck.

Not only can seasonality be tough, so can the weather. Beck understands that there are always risks and rewards to farming. That's one reason he grows a dozen different crops, including asparagus, blueberries, strawberries, cherries, sweet corn, peaches and, of course, apples. A high-tech irrigation system helps bring some predictability while saving money and being kind to the environment by using only as much water as the plants need. 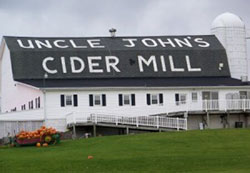 In addition to growing crops, planning public events and managing the entire operation, Beck also has the distinction of being one of only 10 licensed distillers in Michigan. For the past three winters, Beck has been distilling some of Uncle John's famous apple cider. Currently, Beck plans to sell an apple brandy as well as a fortified apple dessert wine.

"We started our winery about five years ago. I wrote a grant to the USDA to build the winery and get it going," says Beck. "Just last year I wrote another grant to start selling our products off the farm. We came up with a whole new package line, and have a salesman and a distributor selling our wines all across the state. It's pretty exciting. We focus on hard cider and fruit wines, like our Harvest Cherry, Harvest Raspberry and Blueberry wines, but we have something for everyone." Beck's favorite wine he makes is his Gewurztraminer, which was the only Gewurztraminer to medal at the Indiana State Fair in 2007.

Not only does his wine win awards, so does his cider. In 2006, the Becks took third place in the National Fresh Cider Contest and in 2003 were voted best cider in North America by the North American Direct Farm Marketing Association.

Beck says his plans for the future include expanding his list of wines and spirits, while maintaining the uniqueness of the retail store located at the cider mill.

You could say the fruits of his labor are paying off.