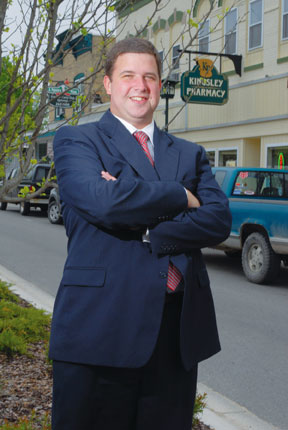 Village Manager might not be quite as weighty a title as White House Chief of Staff or House Majority Whip, but at the age of just 23, Umbrasas’ resume probably isn’t complete just yet.

The Pulse of a Community

“I was always interested in government and politics, so when I came to Ferris I was looking to study political science,” says Umbrasas(AS’07) from his Kingsley village office. “Then I spoke with professor [Donald] Roy, who explained that public administration was applied political science. I thought that was right up my alley.”

The village Umbrasas is applying his managing skills to is archetypally upper-Midwestern, supporting such businesses as the Kingsley Pharmacy and Mary’s Café. (“You can get your finger on the pulse of the community over there at lunch time,” confides Umbrasas.) There’s a fitness center, a hair salon, pizza parlor, the local bar and grill and a Subway. Kingsley doubled in population in the 1990s, bringing it to a total of approximately 1,500 people.

“I’ve got the potential growth boundaries on our master plan maps right here,” Umbrasassays, rummaging through a mass of blueprints in a wire rack next to his desk. Just a few minutes to the east of burgeoning Traverse City, Kingsley has a lot of projects in the works: new water mains, street improvements, and a new library/village office and community center, among others.<

For a young public servant, the nuts and bolts of such projects can be one of the most challenging aspects of the job.

“A small mistake can really make or break a project. Clark-Whipple street improvement, for example, is a $998,000 project,” says Umbrasas. “I worked with the Michigan Department of Transportation on the water main project and the Michigan Economic Development Committee on the street project. I’ve had to grow up fast in the position.”

The Path to Leadership

Umbrasas grew up ­ literally rather than figuratively ­ in Chicago and moved to the Lake Michigan community of New Buffalo with his family when he was a high school freshman.

At Ferris, Umbrasas was president of the Public Administration Association, president of Phi Sigma Kappa and secretary of the Interfraternity Council. “Those experiences gave me the opportunity to work with different kinds of people and find out that things aren’t always going to go your way, so you learn how to compromise.”

“I worked on writing a grant proposal from the United States Department of Agriculture Rural Development for a revolving loan fund. The City of Big Rapids would get money from the USDA, the city would become a low-interest loan-granting agency to people who couldn’t get bank loans. I did pretty well with that, which was one of my selling points when I applied here.”

Although Umbrasas cites staying on top of the details of civic improvement projects as one of his biggest challenges, he also talks like a seasoned politician who has honed his people skills.

“Whenever somebody comes in with a complaint, it may not be the most important thing going through my mind right then, but that person has something burning in them. The best thing I can do is sit and listen and follow up. Even if I don’t solve the problem for them, they know I’m looking into it and working on it. That makes people feel good.”

Strolling through town, Umbrasas points out where Kingsley will be breaking ground on a new library and new village office. A farmers market is opening up and Umbrasas motions toward the south end of town where a county park features softball and soccer fields, basketball and tennis courts, and an 18-hole disc golf course.

“We have plans to grow because people want to move into town,” says Umbrasas. “We have a great school system and small town feel, but we’re just 15 minutes from Traverse City.”

He seems as though he’s been in the job of promoting the village for years rather than months.
“I had a friend whose family had a cottage near Kingsley, and I always remember seeing the slogan, ‘A little bit of paradise.’ I called up my friend and I said, ‘Guess where I’m applying for a job ­ a little bit of paradise!’”