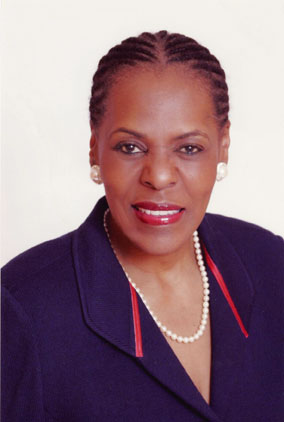 Now in her sixth term serving Michigan’s 13th Congressional District, Congresswoman Carolyn Cheeks Kilpatrick (B’65) is a member of the U.S. House of Representatives’ influential Appropriations Committee. Also, she was unanimously elected Chairperson of the Congressional Black Caucus for the 110th Congress. Campaigns and Elections identified her as one of “Five Women to Watch” in the 110th Congress, and the Capitol Hill newspaper Roll Call named her to its list of future Capitol Hill leaders.

Born and raised in Detroit, Congresswoman Kilpatrick was first elected to the Michigan State House of Representatives in 1978. She served in that capacity for 18 years before winning election to the U.S. House.

Congresswoman Kilpatrick has two children, a daughter, Ayanna, and a son, Kwame, who is serving his second consecutive term as mayor of Detroit. She is the proud grandmother of five grandsons, including two sets of twins.

Crimson & Gold recently talked with her about public service, the challenges of the new economy and the growing influence of a diverse population on American politics.

C&G: For people who don’t know your career, could you tell us a little about your public service?
CCK: I served for 18 years in the [Michigan] State House of Representatives. This is my sixth term here, so I’m in my 11th year.

C&G: How did you get involved in politics?
CCK: Almost 30 years ago, I was head of political action for our church, The Shrine of the Black Madonna in Detroit. They said, “You run,” when the opportunity came. I said, “Oh no, not me.” But I ran. My kids were about 8 and 10, I believe, at the time. I was then married to Bernard Kilpatrick, who was an all-star basketball player at Ferris ­ we met in college.

C&G: How did you come to attend Ferris?
CCK: I had a cousin who attended Ferris before me. When I graduated from the Detroit Public Schools, I knew I didn’t want to go to a big university. I came to Ferris in December of 1963 after graduating at the head of my class in June. I had been contemplating where to go, and my parents said, “Okay, that’s long enough!” So I went to Ferris.

C&G: Your son, Kwame, is mayor of Detroit. How did he get involved in politics?
CCK: He’s always been involved in all of my campaigns. When I ran for office [the first time], I think he was 8. He went on to graduate from high school and went to Florida A&M University. He was a big football player and thought of going pro. The opportunity for me to run for the House came in 1996, and he said, “Ma, I want to run for your seat.” I was shocked. He’d graduated from college, and his wife was about to birth twins. Really, I don’t know why I was shocked, because he’s that kind of guy. He ran and won, served two terms, and then said, “I want to run for mayor, Mom.” He’s done a wonderful job; I’m most proud of him.

C&G: You’re chairwoman of the Congressional Black Caucus, which I believe is at its largest membership in history.
CCK: Yes, it is. It has 42 members from 22 states, one territory and the District of Columbia. We represent more than 40 million Americans. Seventeen of our members’ districts are not majority African-American. We represent Asian-Americans, Latino-Americans, Arab-Americans, Native Americans, European-Americans and others who make up our districts. We also represent millions more Americans who are African-American who may also have one of those other ethnicities. Our constituents come to us for services and ask us to help them, so we’re very active and very busy with our responsibilities.

C&G: Do you think the influence of African-Americans and other minorities is growing in the United States?
CCK: Yes, I do. We still have much work to do, but we are listened to here in the Congress. We’re 73 votes and we call ourselves the Tri-Caucus: the Congressional Black Caucus, the Congressional Hispanic Caucus and Asian-Pacific American Caucus. Between the three, we have 71 votes in the House [and two in the Senate], and that’s a block to be reckoned with. We are influential now and many of our African-American representatives are now senior. CBC members hold four full committee chairmanships: Taxation, Judiciary, Homeland Security and Ethics. We also hold 17 subcommittee chairmanships, everything from Housing to Finance to Development, so we’ve become quite influential and are really at the table. We’re honored to serve in those capacities.

C&G: As a woman in politics, what do you see as the influence of women in elected office?
CCK: Again, that’s another milestone. For the first time in the history of our country ­ and this is the 110th Congress ­ we have more women members than ever before, 73 ­ both Democrats and Republicans ­ in the House for the first time ever. So we’re gaining influence. Women chair major committees, and for the first time we have a woman Speaker of the House, Nancy Pelosi.

C&G: What’s the toughest thing about a career in politics?
CCK: I think the family suffers most. That’s why we’ve always done quality time instead of quantity time. My kids were small when I was first elected, and being away from them was the hardest thing for me as a mother. Although Lansing was only an hour-and-a-half away, I had to be gone three days a week, overnight for two nights of the week, so being away from my family has been the hardest thing for me. The second hardest thing is that you’re fair game. You just do your job and sometimes people think it’s not enough, or the papers beat you up. But it’s an absolutely marvelous career. I wouldn’t change a day of it.

C&G: What do you see for the economic future of that area given all the change in the automotive industry?
CCK: The auto industry is going through a transformation. It will never be what it once was because the world is global. One in seven American jobs is tied to the auto industry. The country is going through economic woes as a result of this, so we’re building new high technology jobs. We have Tech Town, where innovative companies are coming on board to develop science and 21st century technologies. At the same time, we’ve got to re-tool our universities. First of all, having our children attend higher education is a challenge we must meet. Education is the key to success or failure in individual lives and, in the global economy, it means success for our country. When I was graduating from high school, you had to have that diploma; now you have to have at least a four-year degree to compete. Graduate degrees are becoming a must, also.

C&G: Any final words for your fellow alumni?
CCK: I’m very proud of my undergraduate studies at Ferris. Without all of my education and a good family and a strong faith, I could not serve adequately in the Congress. I’m honored to serve, and I’m proud to be a Bulldog!