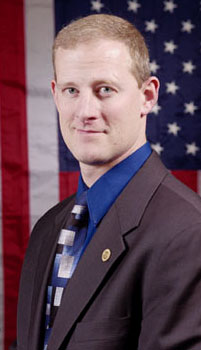 It's Friday morning before Super Bowl XL in downtown Detroit with weather unseasonably mild for the first week of February. The sky is overcast and a light rain falls. Hoopla is in bloom.

At the corner of Cass and Michigan Avenues, site of the Patrick V. McNamara Federal Building, brightly colored banners underwritten by FedEx, Pepsi, Gatorade, Visa and other corporate sponsors flutter from lamp posts. Tethered above the entrance to a building across the street, a huge inflatable football advertises the services of AT&T.

That football doesn't seem as large viewed from the Federal Building's 20th floor, where scores of men and women sitting at long tables stare at wall-mounted flat panel monitors and white screens showing video of various downtown sites and real-time satellite imagery from the National Geospatial Intelligence Agency. Hanging from the ceiling are signs with the acronyms of nearly every imaginable security agency: FBI, DEA, TSA, even the RCMP ­ Royal Canadian Mounted Police.

This is the Joint Operations Center coordinating security for the game. Mike Moll (EHS'93), protective security advisor with the Department of Homeland Security, is calm amid all the activity, talking to a fellow DHS agent who is already planning security for Super Bowl XLI in Miami. But the focus now is on Super Bowl XL and making sure the most dramatic thing that might happen is the underdog Seattle Seahawks beating the Pittsburgh Steelers, which seems like a pretty good bet ­ that nothing dramatic will happen off the field, that is.

The Road to the Super Bowl

"We were fortunate in having the 2005 All-Star [baseball] game in Detroit in July. It was a great event to use as a run-through for how we were going to protect the Super Bowl." Moll is talking about his experience to a group of more than 300 Ferris students in a "Backpack to Briefcase" presentation at the Rankin Center Dome Room a little more than a month after the big game.

Moll's trip to the Super Bowl began when he enrolled at Ferris in 1990, the same year he joined the Michigan Air National Guard. "I figured going through a different academy would be a good way to get experience while I was in the police academy here at Ferris," Moll explains. He was called up for operation Desert Storm in December of '90 and served with a special Air Force police unit in Cairo, Egypt, before returning to Ferris the next fall.

Moll's first job after graduating in 1993 was with the Indianapolis Police Department, though he was laid off after only a few months on the job.

Through friends in the Grand Rapids Police Department, Moll learned about a chief's position at Davenport College. He interviewed for the job and was hired. Ultimately, Moll became Director of Public Safety for 18 campuses in Michigan and northern Indiana. After five years in the position Moll became a private security consultant, taking on a number of clients in west Michigan. Then another unforeseen event again changed his life.

"Shortly after 9/11 I, like many other people in the country, wanted to make sure nothing like that ever happened again," Moll tells the students. He joined the newly formed Transportation Security Administration as law enforcement liaison with responsibility for the Grand Rapids, Kalamazoo and Muskegon airports. From there, he was selected to become a protective security advisor ­ one of only 63 in the country ­ with the Department of Homeland Security.

"One of the things DHS got involved in was special events. It was kind of mission creep," Moll says, explaining how he found himself at Ford Field, keeping in touch with other law enforcement officers over the din of the crowd by text messaging on his Blackberry. "We were in constant communication. I held a radio that had direct connect to the federal coordinator."

DHS listed the Detroit Police Department as the lead agency but with so many diverse groups involved, close communications was one of the operation's most vital aspects. "The local law enforcement agency should always be the lead agency. However, with an event of this size, federal agencies had to take part and work hand-in-hand, which helped break down some walls," says Moll. "We worked very well together."

One of the potential threats to Super Bowl XL that local law enforcement couldn't handle alone was vulnerability from the air, especially with Detroit situated on an international border. Going into the event, the standard for a Temporary Flight Restriction around a designated area was three miles in diameter and 3,000-feet up. Given the limited size of the TFR the military wasn't even going to provide cover to interdict planes ­ with Detroit City Airport only four miles from Ford Field, there would be no time to make a shoot/don't shoot decision.

Drawing upon his background in aviation security (he authored a paper on potential surface-to-air missile threats to commercial aircraft and was one of six people to write the template that all 445 commercial airports in the United States use as a mitigation strategy for that threat), DHS tasked Moll with writing a vulnerability assessment. That assessment called for a much larger TFR ­ 30 miles in diameter and 18,000 feet up. The proposal went to the state police, the FBI and the federal coordinator. Gov. Jennifer Granholm wrote a letter to DHS Secretary Michael Chertoff in support of the expanded TFR. Chertoff approved the change.

Security for Super Bowl XL involved much more than keeping an eye on the action at Ford Field ­ which included eight Ferris students who won the chance to dance to the Rolling Stones playing "(Can't Get No) Satisfaction" at half-time. There were 14 separate venue sites including practice facilities in Allen Park and Pontiac, hotels in Dearborn and Pontiac, Cobo Hall that held the 'NFL Experience' and the Renaissance Center, home base for many in the media as well as site of the ESPN stage.

Just like the teams ­ or the rock'n'roll band ­ on the field, preparation began long before the big event, but also went on long after the post-game press conferences were over and the roadies had crated up the amplifiers.

"I was at the Federal Building at 6 a.m. and got back to my hotel a little before midnight. It was a long day after a week of 12-14 hour days," says Moll.

His regular duties with DHS also continue out of the media spotlight.

"Right now my priority is looking at chemical facilities," explains Moll. "I'm meeting with owners and operators, taking a look at what their security posture is and helping them implement some protective measures that maybe they haven't considered."

During the Super Bowl, Moll worked closely with the DHS agent whose district encompasses Detroit. Moll's own district covers most of the rest of Michigan ­ everything north of a line running from Benton Harbor to Bay City ­ which includes the Soo Locks, through which more than 90 percent of the country's iron ore passes. "If the Locks or the adjacent International Rail Bridge were to be damaged, theoretically the auto industry would shut down in two weeks and the steel industry in a month. One of my goals is making this understood at DHS, which is really starting to look at the issue."

So while the 68,206 fans in attendance at Ford Field might not have given much thought to their safety, scores of Ferris students left Moll's presentation at the Rankin Center with an appreciation for the work he and hundreds of others put in behind the scenes. Moll enjoys both his work and talking about the opportunities there are for careers in law enforcement.

You could say he gets satisfaction from it.