Coach Keith Guy (B'98) has taken the Muskegon Heights Tigers men's basketball team to the state finals, compiling a two-season record of 51-4. As he walks down the high school's hallway between classes, Guy points to one student after another, asking them if they've turned in their ACT scores ­ making it sound more like a command than a question. In addition to being a varsity coach and school counselor, he's also on the Muskegon Heights City Council. Guy talks to C&G about coaching, playing the game, mentoring and giving back to the community. 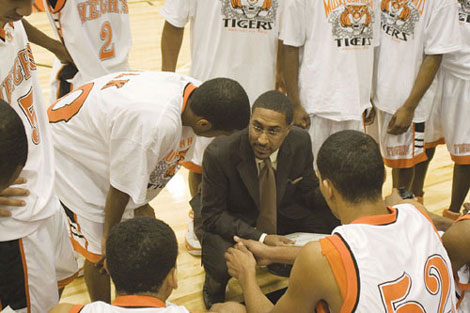 Crimson & Gold: What year did you graduate from Ferris?
Keith Guy: I graduated in '98, in Business Education with a minor in Phys. Ed. and coaching. I've done all my coursework for a master's in counseling. I'm just finishing up my thesis.

C&G: How long have you been coaching at Muskegon Heights?
KG: As head coach, I'm in my third year. I was the assistant coach for two years before that. My coaching background actually got started at Ferris. I was a graduate assistant in 1998. After that, I went to West Michigan Christian and coached freshmen for a while, then went to Muskegon Community College and was an assistant coach. Then I came here.

C&G: You've been pretty successful.
KG: We're 51-4 over the last two years going in to the current season. We had the opportunity to play our regionals at Ferris in 2003 and '04 and won both times. The first year here we went to the state semi-finals. Last year we went to the state finals and finished state runner-up. It's a hard act to follow; the only thing we have left to do is win the whole thing. That's our goal this year.

C&G: How do you like your chances this year?
KG: We have quite a few good players coming back. Before the season even started, we had five guys who had been offered full-ride scholarships to either NCAA Division I or Division II schools.

C&G: What are your strengths?
KG: We play up-tempo, full-court, man-to-man, in-your-face, guard-you-the-whole-game. It's pretty fun to watch. Last year it was essentially a guard-oriented team. I think this year we'll be more an inside team with some dominating guards on the outside.

C&G: What are the kinds of things you like to stress as a coach?
KG: The first thing I stress is academics. As a coach, I've never had a kid become ineligible. Before we take the floor, we do a mandatory study table an hour a day. Every senior who played for us has had the opportunity to play at a college, whether that's junior college, or Division I, II or III. We try to get to the next level. The next thing we stress is family and togetherness. We just try to teach young guys how to become productive men. We want them to go to college or be successful in whatever they do. It's not just about basketball. This is just a tool we can use so the players can see other parts of life.

C&G: You've been successful while stressing these other aspects.
KG: I've had some good guys, and the parents really support me around here as well, which makes my job a lot easier.

C&G: What's the toughest thing about coaching?
KG: In Michigan high school basketball you can only keep 15 players. Sometimes we get 30 guys who come out for the team. Cutting some of the kids is the hardest part of the job. The second thing that's hard is coaching kids for a couple of years, and then it comes time for them to graduate. You're just getting used to these kids when it's time for them to move on. Another thing is the expectation around here. No one puts more pressure on the program than I do, but the outside pressure is that people expect you to win every year.

C&G: You're also a counselor at Muskegon Heights. What are some of those challenges?
KG: One thing I like about the job is there's something new every day. Today I might be working on scheduling. Tomorrow I might be working on ACT preparation. The next day I might work on individual counseling. We deal with a lot of less-fortunate kids who have different problems than other students. We work on scholarships, taking kids back and forth for college visits, getting kids ready for the next level. We make sure the transcripts are right and send them off to college, set up colleges to come here and visit with us, organize MEAP tests. You name it, we do it.

C&G: In addition to all that, you're on the Muskegon Heights City Council.
KG: I'm in my second full term. The term is four years, but I was appointed for the first year or so after a member resigned. The council sought me out, asked me to apply and chose me to fill the seat. After that I ran and was elected. I was 25 years old when I first got the seat.

C&G: You're a busy guy. What motivates you to take on that additional responsibility?
KG: I always wanted to give back to the city of Muskegon Heights. Growing up I knew that. I just didn't know that it would be in politics. When they approached me, I thought, "What better way to do that than being on the city council?" I love people; I love my community. If I'm going to live here, I might as well have a say in trying to better the place where I live. I grew up here and graduated from here. It's like a dream come true for me.

C&G: How did you happen to go to Ferris?
KG: I played basketball in Muskegon, then went to Muskegon Community College where I played for two years, then got recruited to play at Ferris. I loved it there. And to be honest, since I've been coaching, Ferris has taken more players from our program than any other college. We have a lot of players now at Ferris, and players who will be going to Ferris. It's been great. I go up there and take kids ­ not just basketball players ­ to Big Rapids just to see the campus, which has changed a lot. It's evident that enrollment is rising every year. We always try to participate in the team camps over the summer. Bill Sall, the basketball coach, was assistant coach when I was there. It gives Ferris and Big Rapids a little more exposure, because teams want to play us right now since we've been to the finals.

C&G: What do you remember most about your time at Ferris?
KG: The campus is very student-friendly ­ from the instructors to the students to everybody you encounter. The basketball experience had a family atmosphere. I keep in contact with a lot of the players and Coach Sall. I remember we were trying to make the playoffs. We had to win six straight games and also needed someone else to lose. We won the six straight games and thought we were going to be in the playoffs. Grand Valley was ranked number one at the time. All they had to do was win one game out of two for us to make it, and they lost both. But that was a great run. The other thing was walking across the stage to get my degree. It didn't take me long after graduation to get my first job at MCC as an admissions officer. I had that job within two weeks of graduation, which says a lot about the reputation of Ferris.

C&G: Is there anything else you'd like to say to your fellow alumni or to students thinking about coming to Ferris?
KG: I loved the whole Ferris experience. I tell people about it all the time. In addition to the athletes from Muskegon Heights that have already gone to Ferris, we're probably going to have a couple more this next year. Ferris has been good to us, and we're trying to take care of Ferris.