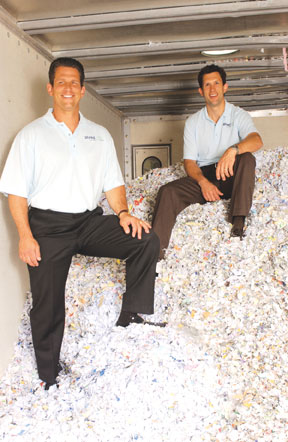 The brothers Gumbko find that recycling and assuring privacy is a winning combination.

Earlier this year a Veterans Affairs employee took his laptop computer home, where it was stolen. The theft put the personal information of more than 26 million veterans and about 2.2 million active duty soldiers at risk.

Even as new privacy laws are enacted, such as the Health Insurance Portability and Accountability Act (more commonly known as HIPAA), technology and its ability to store vast amounts of information on wafers of silicon make it easier for identity thieves to access all that data. After all, you can’t just put a computer hard drive through the shredder, can you?

Turns out, you can.

Brian and Mike Gumbko (T’94 and B’88 respectively) own Shred Docs, a company specializing in shredding and recycling…pretty much anything. Brian runs the daily operations of the business.

“We recently added a new customer, a pharmacy. They have pill bottles that need to be destroyed because the bottles have a name, a prescription and other medical information,” explains Brian. “Before he called us, the pharmacist was peeling the labels off the bottles, running them through his wood chipper and trying to catch them in a garbage bag.”

For most jobs, Shred Docs comes to the customer in their custom truck and shreds “paper, microfiche, film, videotape, CDs, hard drives…” Brian says, ticking off the list of materials their on-board shredder will grind past being able to be put back together. “Nothing is being driven around or carted anywhere. We grab it, destroy it immediately, issue a certificate of destruction, which is a legal document, then drive away.”

Both Brian and Mike cite HIPAA, as well as series of other new regulations the average consumer might not think about, including FACTA, the Fair and Accurate Credit Transactions Act.

In addition to privacy concerns, there’s the recycling aspect of the business. Besides compressing greater and greater amounts of personal information, technology also promised to give us the paper-free office.

According to Shred Docs, that hasn’t happened yet.

“The hopper holds about 200 pounds of paper and can shred up to 1,700 pounds an hour,” Brian says. “And the truck holds up to 10,000 pounds of paper.” Thanks to a rapid increase in business, they have a second truck on order. Based in Grand Rapids, the company operates primarily in west Michigan. For some jobs further afield or where the shredding doesn’t have to be done on-site, Shred Docs will send a cargo van to take away the material and shred it later.

One of the Gumbko’s on-site clients is their alma mater who turned to Shred Docs after the University first tried another company. Ferris’ need to recycle paper is one indication that indeed computer screens and hard drives haven’t entirely supplanted paper.

“We estimate that Ferris recycles 215 tons of paper a year,” says Mike. “That’s a lot of trees.”

As with other companies Shred Docs serves, University offices have secure receptacles that hold all that material until the on-site shredding occurs.

It’s not just Ferris and not just businesses who are concerned with both privacy and recycling. Shred Docs has taken part in community events where they will shred and recycle up to 100 pounds of paper for free for people in the Grand Rapids area. At an Earth Day event this year, Shred Docs served the needs of more than 130 people, more than double the year before.

That kind of response attests to a growing awareness of the need for recycling, protecting privacy and Shred Docs’ services.

“We get calls from a lot of retired folks. They have papers they’re afraid to throw away,” Brian says. “We get calls from people with relatives who were business owners and have passed away, wondering what to do with old records. They can bring that stuff in, or we’ll run the cargo van out there. We tell them not to throw it in the garbage, whatever they do.”

He ends with a piece of advice that seems to apply to so many aspects of today’s information-overloaded world.

“You can never be too careful.”