New medicines are helping more people than ever, while others are controversial. Chain store? Independent? Hospital? Where do you go to get your prescription filled?

"Honey, where are my pills?" 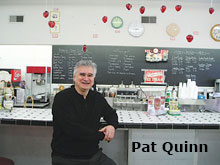 They may be the most important things you pack when you go on vacation with your family, but they're also the smallest - easiest to overlook when remembering to stow your kids' games, toys and favorite stuffed animals, double-checking for the airplane tickets and making sure the house is locked up tight.

And there you are, miles away from the medications you take every day.

Mike Major (P'75), vice president of pharmacy retail operations for Meijer, Inc., says that can be one of the key advantages to getting your prescription filled through a retail chain pharmacy, such as Meijer, Walgreen's or CVS.

"I don't think there is really any difference in purchasing your prescriptions from a chain pharmacy versus an independent pharmacy," says Major. "I really don't see any services that we as a chain pharmacy provide that an independent pharmacy could not, other than the ability to be able to go to the same company's pharmacy anyplace and get your prescription filled. It is still the individual pharmacist and the experience you have that makes the difference."

On the other hand, like the family vacation, the corner pharmacy holds a special place in the American psyche - if not its wallet. According to the National Community Pharmacists Association, the number of independent pharmacies has dropped since 2000. So as prescriptions have gotten more expensive, are those community pharmacies getting left behind?

Westlake Drug in Portage, Mich., features a soda fountain that harkens back to an era before HMOs, biotechnology, drug re-importation and double-digit health-care cost increases. It recalls a time when doctors made house calls and general practice was still common. 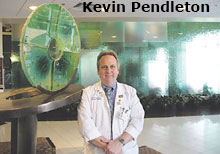 "We rebuilt it with a retro look about four years ago," says owner Pat Quinn (P'76). "It's nostalgic. Is it a necessary part of an independent pharmacy? No, but it's something we felt we wanted to do. We've had a good response. It's bringing people in."

As complicated as drug manufacturing and dispensing has become, customers might well be nostalgic for an earlier time. Westlake Drug and pharmacies like it still provide the personal touch. That's what hasn't changed. What has changed is that more and more, Quinn sees people who did not get their prescriptions filled at Westlake nonetheless turning to the pharmacy for information.

"I think customer satisfaction is one of the reasons my business has done well over the years," says Quinn, who has been in business since 1976. "That's what made us successful ­ telling people what to expect. It helps make patients understand how important their medication is, what it can potentially do in terms of side effects. All of those things are so important in terms of therapy outcomes."

George Wildern (P'49), the owner of Wildern's Drugs in Charlotte, Mich., puts it even more bluntly.

"People should pick one drug store and go there, because that pharmacy will have the records on their computer about what drugs they've been taking. Our computer program tells us if there's an interaction with any drug someone has taken in the last year. If you don't like one store, you should choose another and transfer all your records there."

"Pat and I have had this conversation about charging for advice," Lake says. "My position is that, I'm sorry, I'm not available to someone who hasn't gotten their prescription from me, because if I do, that takes time away from the patients I have. I personally feel very strongly about that. Not that you want to turn people away who are in crisis - that's a different situation - but I encourage people who want to use my services to get their prescriptions here."

As independent pharmacists Quinn, Wildern and Lake not only have first-hand experience in what they see is the importance of one-to-one contact with customers, they all have family histories that provide an important historical perspective on the rapidly changing profession. 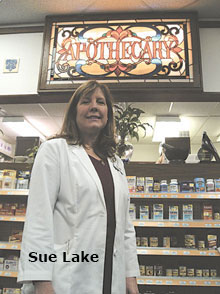 Quinn's son Derek will be graduating with a six-year Doctor of Pharmacy degree after completing his current internship and final coursework at the Pharmacy program's Spindler Hall facility in Kalamazoo. His son's six-year PharmD degree itself is a change from his father's five-year degree. Quinn is looking forward to his son joining him in business in just a few more months.

Lake's father was a pharmacist who owned the business for 20-plus years. Between its current address and its original location just half a block down the street, the pharmacy has been in business for about a century. Lake and her partner Susie Anthony are only the fourth owners.

Perhaps most impressive in terms of family continuity are the Wilderns. George's father, Harper T., worked at the store a couple of years before he went to Ferris in 1917 to become a registered pharmacist. He then returned to the store. Along with his father, George bought the store in 1948 using money he saved during his time in the service. George's son, Jeff (P'72), is co-owner of the store, and grandson Joe (P'04) also recently joined the business as co-owner. Another grandson, Christopher, is currently in pharmacy school in Florida. George's wife, Esther (Dolly) (P'48), also is a Ferris graduate. The two met at Ferris, and Dolly worked at the store soon after Wildern purchased it. The mother of three worked as director of a hospital pharmacy for 38 years.

Although perhaps not as much in the public consciousness as retail facilities, hospital-based pharmacy may have seen the most dramatic changes of all. Dolly Wildern certainly has experienced that change. So has another Ferris alumnus who thinks that pharmacy as practiced in hospitals is as rewarding as it is fast-changing.

Talk to Kevin Pendleton (P'78), manager of clinical services at Spectrum Health in Grand Rapids, and it quickly becomes clear that while the practice of pharmacy in hospital and retail settings is very different, one thing unites them - the increasing importance of the knowledge-base the layperson perhaps takes for granted when they receive their pills.

"I think it's more exciting and a bit more professionally rewarding," Pendleton says of hospital-based pharmacy practice. "You're almost forced more to keep up with things, because you get questions every day, not so much from patients, but from physicians, nurses and residents."

Spectrum Health employs about 100 full-time pharmacists at its Butterworth and Blodgett campuses. Those pharmacists are taking on an ever-larger role in patient healthcare.

Pendleton notes that many pharmacists, like doctors and other healthcare professionals, are increasingly specialized in terms of their focus. Spectrum Health employs pharmacists in specialties ranging from infectious disease to cardiology and critical care.

"For certain things, pharmacy has taken a lead role," explains Pendleton. "If you have a stroke, and you come to Spectrum Health, we have a stroke team that sees you when you hit Emergency. The person who's evaluating you for an assessment on your level of stroke decides if you're eligible for drugs to break up the clot in your brain, and ushers you through the radiology CT scanner - that person's not a nurse or a doctor, it's a pharmacist. So the role of the pharmacist in the stroke team here is really unique."

Also, Spectrum recently opened up an emergency department satellite pharmacy, which it staffs 24-hours a day. "The pharmacists there do a little bit of dispensing, but they're there for all the trauma codes that come in. It's a whole different kind of practice."

Pharmacists at Spectrum Health and other hospitals don't face the kind of daily pressure in terms of rising drug costs as do pharmacists in the retail trade.

"Pricing isn't so much an issue for us on the hospital side," notes Pendleton. "We have a pharmacy therapeutics committee that decides how drugs are used in the organization. The average pharmacist in the hospital spends zero amount of their time worrying about third-party payments or insurance, that's the big difference."

With the advent of television and print advertising for prescription drugs, consumers are overloaded with information on the latest drugs to hit the market, making us wonder if we have secret afflictions or if we could benefit from the newest miracle drug on the market. 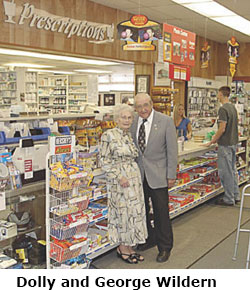 "Has the advertising of certain prescription drugs led to the misuse of prescription medications? Sure," says Andy Young, (P'78), director of college relations and professional recruitment for Rite Aid. "Consumers are asking for products that they don't necessarily need. That is the trend nowadays, to self-medicate and self-diagnose, which is why it is more important than ever for pharmacists to get out and talk to patients about their health concerns."

Meijer's Major agrees. Direct-to-consumer advertising puts a burden on pharmacists who struggle to answer questions about medications that maybe don't even apply to a patient's condition.

"Our pharmacies are the place where a lot of patients go for information about advertised prescription drugs," says Major.

With the increasing number of prescription drugs that doctors prescribe and their prices going up, many employers are choosing to participate in mail order prescription programs, thus limiting a person's access to drug information and the personal interaction a pharmacist can provide.

"Mail order is a large challenge for retail pharmacies today," notes Major. "It is more difficult for patients who have questions to get the information they need from a phone call. The relationship between a patient and a pharmacist is crucial in retail pharmacy. It's very difficult, I would imagine, for a patient in a mail order situation to develop any type of rapport, trust or long term relationship with someone who says 'Hi, my name is Frank,' on the other end of the line."

The banning of the popular painkilling drugs Vioxx and Bextra and the additional warnings mandated for the remaining Cox-2 inhibitor Celebrex illustrate exactly the kind of information that patients increasingly turn to pharmacists to get. George Wildern has first-hand knowledge of these drugs, which until recently were some of the pharmaceutical industry's most touted and profitable.

"These arthritic drugs, I think, got completely out of line," Wildern says. "I quit using Celebrex, myself, when I first heard about possible problems." He had been taking it for an old ankle injury - one he got while playing football at Ferris.

To address the constantly changing field - especially in the area of business practices - Ferris' Board of Trustees last summer approved the first combined Doctor of Pharmacy and Master of Business Administration degree in Michigan.

Whether looking toward managing operations for a multi-store corporation or an established family business, the joint PharmD/MBA degree will help the next generation of pharmacists cope with a marketplace that is changing even faster than the options that pharmaceutical companies are offering - and sometimes having to recall - from pharmacy shelves.