For the past several months, Catherine Badrak (B'03) has been office manager at the European-American Center for International Education at the Abbey of Pontlevoy, France. She has overseen all of its human resources, inventory management, business development, hospitality and budgeting efforts. The Eur-Am Center, in existence since 2001, promotes cultural tourism, international education and economic development in the famed Loire Valley. One of the center's major projects is The Abbey Program, a study abroad opportunity through the University of Southern Mississippi. In the summer the center also hosts the Masters of Pontlevoy International Music Academy, during which musicians from around the world come to take masters classes. The Eur-Am Center is home to numerous music academies and festivals, conferences and celebrations on the grounds of the abbey throughout the year.

From negotiating for the importation of jeeps to learning about winemaking from top sommeliers, Catherine Badrak has made the most of her time at the Abbey of Pontlevoy, France

Badrak drew from her diary to tell Crimson & Gold readers about her experience working for the EACI at the historic abbey.

Outside the window of the train, the sun is setting over the hills of Provence. I am heading home from Aix-en-Provence, and the train is almost to the Paris station. Simply being able to say that I am almost to Paris makes me feel like I'm dreaming. Everything in France takes my breath away - the castles, the bread and wine, the language I've tried so desperately to learn (and still haven't quite mastered after seven years of studying it and almost a year of speaking it here). I've visited many places, but I have yet to find a place that affects me the way that France has.

So, when I was offered a year-long internship in the Loire Valley at a 1,000-year-old abbey, there was no way I could pass that up. In the two weeks between accepting the offer and hopping on a plane to Paris, I took a leave of absence from my job at DaimlerChrysler, sold my new Jeep, subleased my apartment in Novi, (Mich.) and moved all my furniture back into my mom's basement.

As the office manager, I supervise as many as 15 interns, oversee inventory, research prospective business partnerships and deal with various clients and vendors.

Today, about 10 other interns and I rode our bikes from Pontlevoy to Chaumont-sur-Loire, a round trip of approximately 30 kilometers. We had a remarkable picnic on the shores of the Loire River, just below one of the most beautiful castles of the Loire region. That evening, we biked out to Levin Winery where many of my friends work. At Levin, I've had the opportunity to meet people from France, New Zealand, Australia and England. Not only have they taught me about wine and the wine-making process, but I've heard stories of their treks across the globe and obstacles they've had to overcome to get where they are today. (A friend of mine who is one of London's top sommeliers has not seen his family in Australia for six years!).

I learned today that I was accepted into a Master of Arts program in International Affairs at Huron University in London for fall of 2005 and was offered a scholarship as a result of my undergraduate academic achievements at Ferris! I had traveled to London at the end of August to interview with them, so to hear this news after only five weeks was incredible.

On Friday, I spent the afternoon in Paris meeting with a contact at the United Nations Educational, Scientific and Cultural Organization. He is working with us at the Eur-Am Center on a long-term project, which could result in the abbey becoming either a UNESCO club or a World Heritage Site. In fact, he's coming back down to Pontlevoy this weekend to brainstorm with us. I still can't get over the fact that I am in France, having meetings in Paris, and working on a project with UNESCO. I keep waiting to wake up. 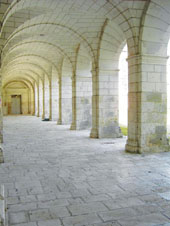 When I took this internship, I never thought I would be importing cars into France, but alas, that's exactly what I've been working on lately. The cars (a Dodge Caravan and Durango) are already imported, but I have to get them registered in France with the Prefecture. Normally that wouldn't be very difficult, but because they are American cars, they must conform to different regulations. I was assigned this project a few days ago, and I've been working on it three to four hours a day ever since. I have talked to the logistics company that imported the vehicles, the Commercial Section at the U.S. Embassy, the DRIRE (a French government agency concerned with vehicle inspections, pollution rates, the environment, etc.), DaimlerChrysler France in Paris and DaimlerChrysler in Michigan. At first I was frustrated, but it's to the point now where it's kind of fun! This morning I called DaimlerChrysler France three times to make sure I understood what I needed to do. I'm sure they thought I was crazy.

Still, I'm accomplishing a project with which I have no previous experience and doing it in France and in French. It's so exciting!

Tonight was our weekly "Family Dinner" with all the interns. Normally there are only eight to 10 people there, but tonight I made stir-fry for 20, including all the interns, our two French cleaning ladies and my boss. Family dinner is great because it's the one time during the week that all my co-workers and I can actually relax and socialize with each other. I didn't know how to cook very well before I came here, but it's been fun learning. I've learned all kinds of practical things here: how to drive a stick shift, how to cook, how to import vehicles. If I left today, at least I can say I've done that!

Today one of our recent interns, Kathy, returned to the abbey after almost five weeks of exploring Eastern Europe. I never thought before about traveling to that area of the world, but now I want to go there more than anything. She visited the former concentration camps at Auschwitz; saw the destruction from the war in Sarajevo; spent time on the beaches in Croatia, and more. I have been thinking about traveling to the Czech Republic, Italy and Ireland, but now I want to take the less traditional route and head east. Every time I hear about somewhere new I have to go there, which is why my eventual goal is to find a permanent job that lets me travel as much as possible ­ maybe with the United Nations, the International Red Cross, or one of the many NGOs (non-governmental organizations). Since starting my studies at Ferris, nothing has opened my mind up like living and working in Europe has - and now there's no turning back! Il faut profiter!