You're stationed in the northern Kuwaiti desert. It's mail call, which you've been waiting for anxiously because you're expecting a special package from home. Are you most hoping to receive A) letters from family members, B) cookies, C) a digital camera, or D) a sporting goods catalog.

If you're trying to finish your degree by taking an online marketing course and the Army doesn't forward the direct marketing appeals you need for assignments, then the answer, believe it or not, is "D."

Barry Allen was one class short of completing his bachelor's degree in Hospitality Management when his Michigan Guard unit shipped out in support of Operation Iraqi Freedom.

"We didn't get direct mail and catalogs over there. My wife, Sue, actually had to forward me some things," says Allen. "Professor [Susan] Jones was flexible and creative with some of the assignments she gave me, tailoring them to what I had. I used Stars and Stripes as opposed to one of the Detroit papers, for example. That was the only thing available to us, unless we wanted to wait for snail mail to catch up." 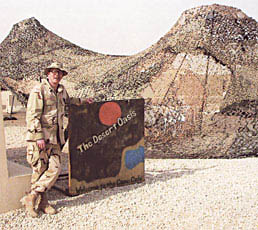 Despite the limitations of mail service, taking part in supply missions into Iraq and rising at 2 a.m. to get Internet access, Allen aced the course and completed his degree.

Unwittingly, he might have made life a more difficult for his fellow students in the process.

"I have students who will say, 'I had the sniffles,' as an excuse for not getting assignments in on time," Professor Jones says with a laugh. "I hesitate to use Barry as an example because he's so exceptional, but here's a guy who's in Kuwait and Iraq, sometimes getting shot at, and he's getting his homework in on time. I would take 20 Barrys in the class any day!"

"I teach four classes in the summer online, which is pretty much all I do during that semester," says Jones. "During the regular year, I usually teach three classes face-to-face and one class online. The online classes provide great opportunities. Barry, I think, is the first overseas service person I've had, but I've had students in Australia, throughout South America, Mexico and Canada take the classes."

Jones sees the online experience as part of a whole array of delivery systems that give students different options for advancing their educations. Total online education lacks the personal interaction that is so important to student development, but in some situations, distance-learning fills a crucial gap - and not just for people in the military.

"The summer classes are great for people who are doing off-campus internships. They want or need to go home, but they don't want to stay out for a whole semester or term," explains Jones. "In the past we've lost some of those people to community colleges. Now we can keep them in our classes, which is great."

Allen enrolled in Jones' Direct Marketing course, buying his books in advance for a "Pre-Strike" mission on the course. Even then, there were plenty of challenges to completing the course that most students don't face, including the lack of all those direct marketing appeals so common at home.

"Barry earned a solid A. He was very motivated," says Jones. "He really immersed himself in the material and was able to demonstrate an understanding of it, which I find all the more impressive, considering his surroundings and the other things on his mind - being a family man in a war zone. Also, I found his answers to the assignments were, as with most non-traditional students, richer and deeper than the average."

Life-experience certainly plays a large part in the vibrancy that adult learners bring to their studies.

Even as he was ready to ship out to Kuwait, his wife had a life-threatening allergic reaction. She had to be air-lifted from Big Rapids to a hospital in Grand Rapids.

"She stopped breathing two different times," Allen explains. "So I came home for 96 hours. When I arrived in Grand Rapids, they were just taking her off the ventilator."

With one crisis down, the Allens then tackled getting Barry a promised promotion that was going to be denied because the Army wouldn't grant him leave time to return to the States to take a required course. After some wrangling with the military bureaucracy, Allen "scooted out" to Germany for a month to complete the training. 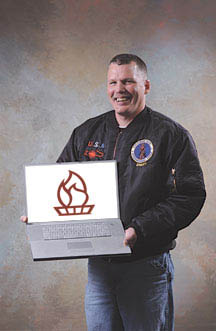 Using the Internet, Barry Allen completed his degree in marketing from half a world away.

"I think I was twice as old as most of the students who were in their early 20s," says Allen. "But that got me geared up. I finished that right before I started the online course for Ferris, so I was already in learning mode."

In the theater of operations, learning mode means, among other things, being persistent in getting Internet access.

"When the camp was full, people would be standing in line to get online even at two in the morning!" says Allen. "Sometimes I just got up early and studied. Then I'd try to get on the computer and at least type up the assignment so I could store it on a disk to send it some other time. It was a challenge."

In addition to his National Guard service, Allen has also been in the Navy and Navy Reserve. After his most recent posting, he's ready to retire from military life and concentrate on putting his marketing degree to work.

Upon returning home in February of this year, Allen began receiving much more mail, one piece of which was especially bittersweet: his diploma. He didn't make it back in time to walk in winter commencement.

As usual, Allen was undeterred. He took part in the spring commencement ceremony instead. While his online experience helped him achieve his goals, celebrations are best delivered the "real" world way.