On Oct. 7, 2002 at 3:45 p.m., the space shuttle Atlantis lifted off from the John F. Kennedy Space Center on Merritt Island in Florida. The shuttle’s three main engines fired at intervals of 120 milliseconds and the booster ignited, causing a massive spray of white-hot flames and a billowing cloud of smoke. The Atlantis’ crew of six had the important mission of carrying the S-One Integrated Truss Segment up to the International Space Station.

In the launch control center’s firing room with its 191 different cameras to monitor activity, Scott Royer (T’83) was busy coordinating dozens of workers’ activities, just as he had on more than a hundred previous launches. Royer thinks the launch of a shuttle is the best part of his job. He compares watching the monitors, listening to eight different channels on his headset and making sure everything runs smoothly to being a choir director.

“But then sitting in the firing room just before lift-off, there’s not a sound – you really could hear a pin drop,” he says. “Then the boosters light off and the shuttle clears the pad. After that everyone jumps up and applauds. It just makes it all worth while.”

Royer is a support test manager, responsible for integrating ground support operations for the launch. When the space shuttle is sitting on its mobile launcher, for example, it’s Royer’s job to coordinate its roll out to the launch pad from the Vertical Assembly Building and get it hooked up. Once it clears the pad after the launch, control of the mission transfers from the Kennedy Space Center to Mission Control in Houston, Texas.

Then Royer’s job gets very busy. He has to help secure the launch pad and make it safe for workers to prepare for the next launch. This includes inspection by a special team of engineers that provides a “quick-look” damage assessment. It’s all a part of Royer and the rest of the launch team already preparing to take control of the shuttle again on its approach for landing.

The worst part of Royer’s job happened just short of four months after the Atlantis launch. Sixteen minutes before the shuttle Columbia was scheduled to land at Kennedy Space Center, Houston lost communication.

While the nation and the world mourned the loss of the seven crew members aboard the Columbia, workers at the Kennedy Space Station felt those losses more keenly than most. They also felt an additional loss.

“People consider the shuttle itself their baby – they’re really emotional about it,” says Royer. “They know every inch of the shuttle and treat it like one of their kids.”

“When the Columbia was lost, they sent me out to Texas to help coordinate the shuttle recovery efforts,” says Royer. “I had two groups of 20 forestry people. As a group we spread out and systematically walked in grids. When someone found something they marked it, and I would identify it if I could. Then we put the part in a bag, wrote down the GPS [Global Positioning System] coordinates where it was found and took a digital picture of it. At the end of the day it was all turned in and cataloged. Important pieces, such as a piece of the left wing we found, were fast-tracked back to Kennedy. I walked more than 250 miles that month.”

Royer’s original career plans were more terrestrial than celestial. While earning his associate’s degree in HVACR, Royer also took business classes with the goal of having his own air conditioning company.

“My grandparents lived in Florida, right next to the Space Center, and they talked me into moving down and applying at Kennedy,” Royer says. “I got two interviews right off the bat. Boeing interviewed me and basically hired me on the spot for an air conditioning mechanical position out at the launch pad. But before I could even take that job, another guy offered me a position at EG&G. They needed someone who understood computers as well as air conditioning to work their console controls.”

Besides paying better, the second job put Royer in an air-conditioned launch room rather than on the often-steamy launch pad. Royer accepted the position.

Not long after, yet another company was trying to hire him.

“Lockheed Martin kept trying to get me to come work for them,” Royers says, shaking his head at the memory of the flurry of job offers. “They had a lot more to do directly with the shuttle, and that interested me, so I moved over with them and it’s just gone from there.”

Today, Royer works for United Space Alliance, a joint effort of Lockheed Martin and Boeing, which oversees shuttle launches for NASA. Many of the people who first tried to hire Royer now work under him, readying the shuttle program for its return to flight.

The Place to Be

Since starting at Kennedy, Royer has earned several college degrees including a B.S. in Management of Technical Operations from Embry-Riddle Aeronautical University, and other degrees in Professional Aeronautics and Aviation, and Aeronautical Science. But it was Ferris that first got Royer in the door and he has returned in order to advance his career. As an orbiter test conductor, one of the positions Royer has his eye on, he would conduct and integrate all pre-flight orbiter testing procedures. Or, as a chief test conductor, he would be the senior contractor representative on the shuttle test team. To that end, Royer has enrolled in Ferris State’s online HVACR B.S. program. 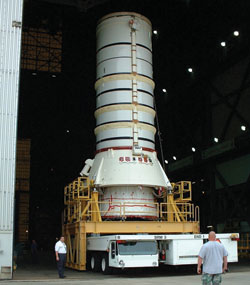 As part of his job as Move Director, Royer coordinates the move of one of four sections that make up a solid rocket booster loaded on a specially designed transporter.

“I have the HVACR associate’s degree, and that’s what got me started out there,” says Royer. “Now, I can get a bachelor’s degree online in HVACR engineering technology, which will give me what I need to qualify for those positions. I was going for a dual master’s degree in Technical Management specializing in security, and Aeronautical Science specializing in education, but decided that a B.S. in HVACR from Ferris would actually be more important to my career.”

“When I first interviewed for a position at the space center, I described all the things I had learned at Ferris and my interviewer was very impressed,” Royer remembers. “At that time he was also interviewing another guy who had gone to a local air conditioning school and he didn’t have half the education that I had. Actually, the school the other candidate went to asked me if I was interested in teaching there.

“Ferris is the place that can get me where I want to be,” Royer says of his decision to pursue the online HVACR degree. In turn, Royer is helping NASA get back to where it wants to be – in orbit.

This coming fall, in addition to starting a new semester, Royer will be looking forward to another important event: the possible re-start of the shuttle launch program. The new semester begins in August, while the shuttle Atlantis could launch as early as mid-October with a crew of six. And President Bush recently proposed manned missions to the moon and Mars.

“Who knows, I may be able to transfer to Environmental Control and get to work HVAC systems with a new type of shuttle – anything is possible,” Royer says.

Students who dream about where their degrees might get them, like to think that the sky is the limit. In Royer’s case, that wasn’t quite high enough.